“Does it have that antenna issue?”, to which I reply no* – “Is that because of the case you have?”, which elicited another terse no from me.

Someone pointed out to me that I hadn’t actually gone on to clarify the antenna thing (I’m hesitant to use the word “issue”), so here’s clarification.

Bottom line: antenna issue or not, it doesn’t affect my day-to-day usage of the iPhone 4.

I’m not saying there’s no antenna issue – yes, you can drop bars (and perhaps bras if you’re dyslexic, but that’s a whole other story), and perhaps if you were using the iPhone 4 on a substandard carrier (*cough*Optus*cough*), you’d be able to drop calls. Maybe.

The fact is, all phones can drop bars when you attenuate the signal; the only “issue” here is that because the iPhone 4’s antennas are on the outside, the effect is more readily apparent than it would be on your Nokia, for example.

In my mind, and from what I’ve read on the interwebs, Apple knew about this antenna issue long before the iPhone went into production. Apple knew about it, and did nothing. Why? Because they likely figured the trade-off between vastly improved signal in more areas was worth the moderate signal loss in a very specific use case (i.e. holding the phone in a “death grip” or such a position like you’re going to punch yourself with the phone in the palm of your left hand).

The vast majority of people I’ve been in contact with, or read opinions from, that have an iPhone 4 don’t experience these issues either.

Calling someone a “fail” because they bought a device with a very specific issue is just plain ignorance on your part – since when have we ragged on people just because they have to replace the batteries in their wireless mice, for example? To gain freedom from oppressive cables, they’ve had to reach some sort of compromise in other areas – namely, having to replace batteries every now and again.

It’s the same with the iPhone 4; for Apple to provide vastly improved signal in more areas, they had to devise a solution which meant that a small percentage of users had a specific use case in which they would experience call drop-outs and a reduced signal.

Okay, so say Apple knew about the issue and did nothing. Say their engineers haven’t been thinking of a solution. I’ve read that some sort of protective coating could have been applied to the stainless steel antennas to prevent any attenuation, but certain properties of stainless steel prevented that from being a cost-effective solution. Perhaps Apple knew that there was an issue with the antennae and hence came up with the Bumper as a solution to this problem.

Whichever way you cut it – the fact that the antennae are on the outside of the phone doesn’t have any impact in how I use the device. At the end of the day it’s a vast improvement on any previous iPhone model, and yes, I’m including the antenna design in that statement. 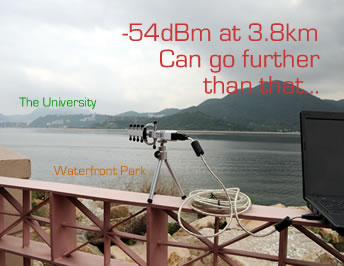 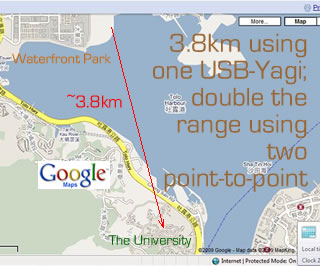 The USB-Yagi is a handy and high performance directional antenna which delivers a remarkable 1000mW+ horse power in the direction it is pointing with a HPBW (Half-Power BeamWidths) of 56 degree.

It connected to the WiFi signal 3.8km away from the University in direct line-of-sight and maintained a stable wireless connection at a sensitivity of -54dBm, which is amazingly powerful and have more rooms to go further than that.

via at danets, we enhance your wireless experience: YAGI WiFi antenna.