Greatest mashup ever, or Greatest. Mashup. Ever?

I’ll agree with the comment on YouTube who said pitch-shifting the vocals made it seem a little like cheating. But it’s so great, I’m prepared to look past that. 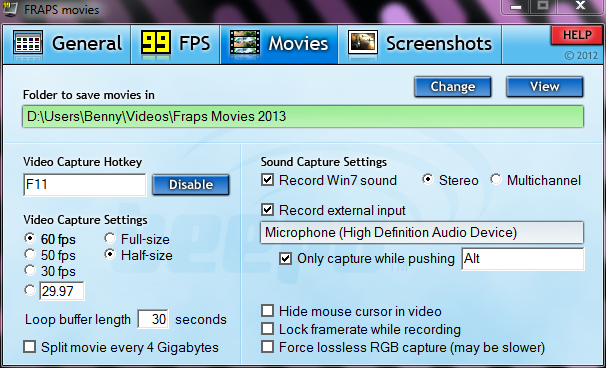 Occasionally, I put gaming-related videos on YouTube. For all of those videos, I’ve used Fraps to capture in-game footage, and as far as software-based capture tools go, it isn’t bad. I’ve been using Fraps for a few years now, and for the most part, I’ve been pretty happy with it.

That said, there are a few things about Fraps I don’t like. For starters, it creates massive files on disk — it works out to be about 1.2GB/minute for 720p footage at 60fps. There’s no option to record at arbitrary resolutions, only your display resolution or half size, whatever that turns out to be1. And enabling Fraps usually kills my FPS, which usually gets me killed in whatever game I’m playing. The frame rate drop I experience in certain (read: more recent, more demanding) games turns me off recording unless I really want to, otherwise I’d probably record far more often than I do. That, and the massive hard drive space requirements for recording.

But like any in-game capture tool, the worst thing about Fraps is that I have to manually enable it whenever I want to record something. That’s fine if I know something cool might happen in advance, or when I know I’m going to do something which I might need footage for later, but I honestly couldn’t tell you how many times I’ve done something epic and wished it has been recorded. So many times I’ve missed out on capturing some real Kodak moments, and all because FRAPS wasn’t recording. The “workaround” for this, if you can call it that, is to have Fraps running all the time — but when gaming sessions go for hours on end, I have neither the hard drive space nor the low-FPS tolerance for that to be a viable solution.

In Shadow Mode, ShadowPlay automatically records everything in the background. It records up to the last ten minutes of gameplay in the background, which you can then save to disk if you want by pressing the appropriate key combo. Do something epic, and want to have a permanent record of it? No need to gripe about not having Fraps turned on and recording to your friends over TeamSpeak, because ShadowPlay already recorded it for you. All you have to do is save the recording.

ShadowPlay is also great because it doesn’t produce massive files when recording footage. It uses the GPU to transcode your recordings on the fly to H.264 (which is why you’ll need a GTX 600 or 700 series graphics card), resulting in reasonably-sized files, and best of all, there’s no performance hit that I’ve noticed thus far. (For comparative purposes, 1GB of hard drive space gives me roughly three minutes of in-game footage with ShadowPlay at 1080p/60fps, compared to under a minute with Fraps at 720p/60fps.) There are alternative software capture tools that can perform similar compression on your recordings, but those use CPU power instead of a dedicated H.264 encoder built into the graphics card. And since my CPU is a few years old now, I don’t really have those CPU cycles to spare when I’m gaming.

ShadowPlay has a manual recording option too á la Fraps, in case you want to go down that path. But having something sit in the background silently recording my every move is great, and means I don’t have to think about what I’m going to be doing next and whether I want to have that on file for later. It’s like having an instant rewind for anything.

There’s always room for improvement though, and ShadowPlay is no exception. It needs the ability to record voice input, for starters. If I’m communicating hilarious things over TeamSpeak but all the recording captures is my teammates’ responses, then that’s not very useful. And I have to do some more thorough testing, but I’ve had a few recordings with a number of graphical glitches too. Then again, Nvidia have labelled it a beta for a reason, so I’m sure it’ll get there.

But for now, ShadowPlay is pretty great. Reasonably-sized files, little to no performance hit when recording, and the best part is, it means I don’t have to worry about turning on Fraps before doing something cool. What’s not to love?

ShadowPlay makes recoding game footage an afterthought, which is what it should be — because you’re supposed to be playing games, not thinking about whether you want to record what you’re doing in games.

About the video2: OK, so, there was this one game of DOTA 2 I was playing, right. We had an Earthshaker on our team who wanted to play him like a carry — constantly going 1v1 against other heroes. Dude thought he was invincible, even after he died three times in the space of two and a half minutes. After he died he’d usually ping-spam the map, resulting in our Death Prophet getting worked up and shout at him over in-game voice. It was hilarious, right up until the point where Earthshaker revealed he had a mic after all, but apparently only used it to abuse other teammates over voice. We lost the game, of course, but it was really strange. Almost like the dude was drunk or something.

Surprisingly, not a bad review.

Everything I knew about women and makeup just got thrown out the window.

Perhaps there are more girls out there who actually dress up as guys?

Note to self: make sure that the opposite sex is who they actually say they are when entering into conversation to minimise awkwardness later on.

What I love about the approach is that it’s show­ing us a com­pli­cated, vir­tu­oso per­for­mance, but mak­ing it really clear and acces­si­ble at the same time. It’s enter­tain­ing, but it’s also an exer­cise in demystification—which of course is exactly the oppo­site objec­tive of every music video, ever. Their pur­pose has been to mys­tify, to mas­quer­ade, to mythol­o­gize in real-time.

via Making music without a mask « Snarkmarket.

Had a long internal battle with myself over which of their (Pomplamoose’s) songs to link – it was between September by Earth, Wind and Fire, and Single Ladies by Beyonce (ugh, which I’ve only just discovered I linked to by mistake in another post. More at the end of this post).

As you can see from the video above, September won out – not because I don’t think their version of Single Ladies wasn’t great, because it is (on more levels than one), but because to me, September better represented what the production-as-performance genre is all about – “subdivision of the video frame, lots of gear, performance, but above all performers” – who, by all appearances, to be normal; there’s no smoke machine, nor any hi-tech special effects.

It’s this kind of stuff that makes YouTube great. Like the Awesome Stopmotion Music (and it’s subsequent redux, coming soon to this blog), such pop-culture references, more commonly known as “memes” have absolutely exploded, and yeah. It’s great 😀

Right, so I only just discovered that I linked wrongly to Pomplamoose’s Single Ladies cover, when I was actually supposed to link to the Bottle Bank Arcade, part of the Fun Theory Redux. I’ve since rectified this error, you can now watch the Bottle Bank Arcade on the original post. My apologies for this.

This post part of Blogtober 2009. We’re almost there – and I’ve gotta start pumping out some serious posts, instead of just Pressing stuff from WordPress’ excellent, but making-me-a-lazy-blogger tool, the Press This bookmarklet. Ah well.

So I have noticed everyone has been making subtitles of their own to this famous scene from Downfall or Der Untergang and I decided to post it with the subtitles that what he is actually saying, so enjoy.

Instead of posting about my somewhat epic and numerous bus misadventures, I thought I’d mix it up by posting something a little left field, if you will.

There’s a meme going around at the moment where people put different subtitles to the clip above (Hitler’s Downfall, or Der Untergang), resulting in some HIL-A-RI-OUS combinations.

The face expressions, the pure rage, all accentuated by any topic you like – pure meme genius.

What you see above are the original subs to the film – that is actually what he says in the movie (except in German, of course).

I’ve shown you the clip above so you can better understand the follow-ons below. I’ve only linked the ones that are actually worth watching – there are many more, but are either not funny or just not worth linking here.

Couple of my personal faves:

What is this? Some money-grabbing scheme from the original numa numa?

Get outta here. The above version, while a lot of work has been put into it, pales in comparison to the original.

For the original (and clearly the best), hit up this link. Don’t forget the equally-as-hilarious misheard lyrics here.