Twitter makes it seem like some people are upset about something 24/7. It's no way to live. It's exhausting just to read it.

If I remember one thing about 2014, it’s how the internet, and Twitter in particular, kind of sucked.

A little backstory: I’ve been on Twitter since 2009. The microblogging social network helped (or hindered, I’m not sure which is more accurate) me through university, and really started to drive home having the internet — or at least a small microcosm of it — around in my pocket all the time. For the most part, I’ve really enjoyed Twitter. It lets me hear the personal opinions and musings of people I admire and respect, both about topics that interest me and ones that don’t. By following the right people, I’ve had some smart opinions and eye-opening perspectives tweeted into my timeline. Most of my reading material comes from Twitter, and while I don’t watch the news or read a newspaper, Twitter keeps me informed about all the stuff I need to know about.

On a more personal level, I’ve averaged about 5000 tweets per year since I joined. I tweet about pretty boring crap, mostly, because that’s just the kind of person I am — one who’s also aware of his public profile and the fact his tweets may eventually be used against him in some way, and the less fuel for that fire, the better. I’ve typically followed anywhere around 600-800 people, which is enough to keep my timeline busy enough to keep me interested and have something new every time I refresh it and enough to not get completely overwhelmed by a deluge of tweets. I generally don’t care about how many people follow me, although I confess it is a nice ego boost to see a large number of people read my drivel.

Last year, though, was different. According to my app for Twitter statistics, this time last year I followed 842 people, had 889 followers, and tweeted 19,851 times. Compare that with the current numbers (605 following, 938 followers, and 21,187 tweets) and you’ll see that I unfollowed over 300 people and only tweeted over a thousand times, one fifth that of previous years. Interesting.

Chalk it up to the mainstreaming of Twitter or people being unfamiliar with a medium which allowed them to communicate with their social circle instantaneously, every moment of every day, but last year I found out Twitter had disadvantages as much as it had advantages.

At first, I realised it was probably unhealthy to be checking something as frequently as I checked Twitter, but at the same time, I didn’t want to miss anything from my carefully-curated list of people and brands/websites I followed. One re-evaluation of my priorities later, and I started the great unfollowing of 2014, culling around 300 people from my list and eliminating that noise from my life. With a less noisy timeline, I could focus on the people and things that really mattered.

But even that wasn’t enough. I started taking longer and longer breaks from the service. My weeks-long journey overseas made me realise I could do without reading Twitter for extended days at a time, and when I arrived back in the land of mobile internet and Wi-Fi, not having that constant connectivity meant I didn’t check the service as frequently as I used to. It was good, but at the same time, I felt like I was missing out, like I was out of touch with people I cared about.

I returned to Twitter just before the middle of the year. For a while, things were fine: my signal-to-noise ratio was good, and I didn’t feel compelled to read Twitter every waking minute.

Then Gamer Gate happened. Overnight, my timeline turned from updates from people I cared about to people retweeting toxic comments into my timeline, leveraging their high follower counts in order to get some kind of public retribution for the offender in question. Suddenly, pretty much every American I followed was obsessed about ethics in game journalism, social justice warriors, and feminism — the latter of which has always been an issue, but a topic I’ve mostly avoided on Twitter thanks to the firefight that usually follows1. Now, though, it was pretty much unavoidable.

END_OF_DOCUMENT_TOKEN_TO_BE_REPLACED

So apparently, this is the best cat video on the internet. Not even kidding.

It is pretty good, though.

via Offline: What is the internet? | The Verge.

What I initially thought to be some kind of publicity stunt has now turned into a quasi-philosophical look at our ever-connected lives, and has started questioning this online stuff we’re constantly plugged into.

I’m okay with this.

On the face of it, it seems crazy: social networking that isn’t social. But like it or not, Facebook, Twitter, MySpace, and your social network of choice are pretty much everywhere. But what does that mean for you? I mean, aren’t you the one that decides what to post, where? Aren’t you the one that decides how many friends you have, or how privy other people are to your innermost secrets, or at least the ones you choose to share with your fellow socialites? While at least some of that may be true, it doesn’t mean that social networking is all that social. Let me explain.

Almost half of the Australian population uses Facebook. And I can tell you from first-hand experience that Facebook is great! Fantastic, even. When Facebook first launched, I remember the stories of how it meant people could keep in touch with people they thought they had all but lost contact with. There was quite a bit of press about people getting in touch with their teachers from high school, or with long-lost relatives, cousins, friends who had moved to other countries. For most people, that was a great thing: it meant that people didn’t have to track down relatives by calling sixteen different individuals just for an email address, or having to go and do the legwork to get in touch with someone from high school. Anyone could just add their friend on Facebook, and that was that. Easy, right?

To reiterate my original question: what happens if social media isn’t all it’s chalked up to be? What happens, instead of connecting people (hi Nokia!), the social web just serves as a reminder for how lonely we all are?

Granted, that’s a rather pessimistic way of looking at things. Perhaps, then, the above statement could be rephrased as such: as well as connecting people, what happens if the social web also serves as a reminder for how lonely we all are? I have friends that only post the most enthusiastic stuff. They’re seemingly always happy. They’re seemingly always content, and never upset, sad, or anything else.

One one hand, that’s great, you know? If they’re happy, I’m happy that they’re happy. But on the other, you have to wonder: if someone is posting about how much they love their significant other, or how great their life is, and I’m here reading their happiest-ever-status, doesn’t that mean my own life is a miserable mess by comparison?

When I scroll through page after page of my friends’ descriptions of how accidentally eloquent their kids are, and how their husbands are endearingly bumbling, and how they’re all about to eat a home-cooked meal prepared with fresh local organic produce bought at the farmers’ market and then go for a jog and maybe check in at the office because they’re so busy getting ready to hop on a plane for a week of luxury dogsledding in Lapland, I do grow slightly more miserable. A lot of other people doing the same thing feel a little bit worse, too.

Maybe it’s just me, but sometimes I ask myself if any of this social networking stuff is “worth it”. I wonder if keeping up-to-date with Facebook, or Twitter, is “worth it”. What do I gain? The question, once again, could perhaps be better rephrased as: do all these social networks make me feel more connected with people I care about, or less so?

I’d like to think that social media has made our lives better. In ways, it has: it means we can talk to our friends in a different time zone. Social media, the social web, whatever you want to call it, has meant that we can connect with Mac enthusiasts from all over the world. It means that we can connect with famous photographers, people we look up to, and yes, even our long-lost relatives or friends that we just lost touch with.

But there’s always the other side of social media, the side that everyone seems to ignore just because the advantages seem to outweigh the negatives. The side that says you shouldn’t use the social web to supplement your social activities, but instead use it to complement them. The side that says this “passive consumption” is bad for you.

If you’re wondering by now, you should probably read the entire article by Stephen Marche, but I’ll quote him again anyway because it serves as a nice summary. (The article, if you’re wondering, is about whether Facebook makes us lonely, but most of the topics I’ve covered here are one and the same.)

LONELINESS IS CERTAINLY not something that Facebook or Twitter or any of the lesser forms of social media is doing to us. We are doing it to ourselves. Casting technology as some vague, impersonal spirit of history forcing our actions is a weak excuse. We make decisions about how we use our machines, not the other way around. Every time I shop at my local grocery store, I am faced with a choice. I can buy my groceries from a human being or from a machine. I always, without exception, choose the machine. It’s faster and more efficient, I tell myself, but the truth is that I prefer not having to wait with the other customers who are lined up alongside the conveyor belt: the hipster mom who disapproves of my high-carbon-footprint pineapple; the lady who tenses to the point of tears while she waits to see if the gods of the credit-card machine will accept or decline; the old man whose clumsy feebleness requires a patience that I don’t possess. Much better to bypass the whole circus and just ring up the groceries myself.

There’s some stuff in there that’s for another time, but for now, you’ll excuse me to post about how good — no, great! Fantastic, even! — my life is on all the social networks. 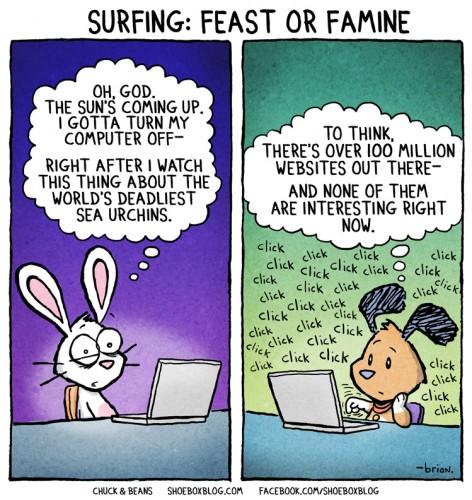 via Chuck & Beans – The Daily What. 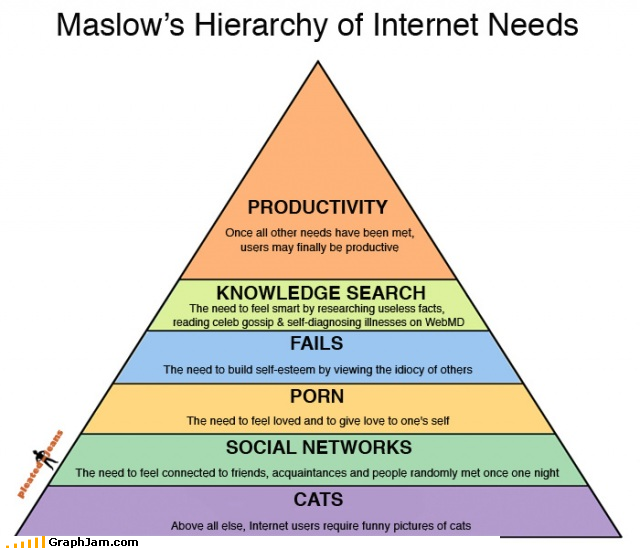 via Internet Needs – GraphJam: Music and Pop Culture in Charts and Graphs. Let us explain them..

via INFOGRAPHIC: The History Of Facebook’s Default Privacy Settings.

via JESS3 / The State of The Internet on Vimeo.

Where does x264 fit in all this? H.264 is certainly not going away, not for quite a while. In most sane parts of the world, software patents are a non-issue. But in the end, none of it matters for x264: we will continue our quest to create the best video compression software on Earth. Unlike Adobe, we don’t sit complacent when we are the best; we keep trying to become better. We add new features, improve compression, support new platforms, improve performance, and there’s far more to come. We don’t care that many H.264 encoders are so bad that they can be beaten by Theora or Xvid. We don’t care if VP8 comes out; that’s just another encoder to beat. We are here to ensure that the best choice is always free software by constantly making free software better.

via Diary Of An x264 Developer » Flash, Google, VP8, and the future of internet video.