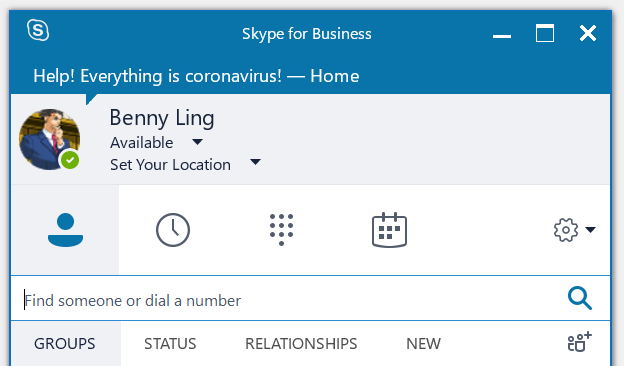 We use Skype for Business at work. It’s good and all, but all signs point to the fact it will eventually be replaced by Microsoft Teams. Like a lot of people, I’m using both until such time as I believe Teams completely subsumes Skype for Business.

One of my favourite features of Skype for Business that Teams doesn’t currently have is the status messages of the former. I don’t know what they’re supposed to be used for in a corporate setting, but I’ve been using them. Some might even say borderline inappropriately, but since HR hasn’t talked to me about them yet, I figure I’m in the clear. For now.

I have an affinity for status messages. Growing up with MSN Messenger tends to have that effect. There’s very few things like a particularly cute or clever (or better still, both) status message to brighten someone else’s day as they scroll through their contacts list, looking for someone else to hit up for whatever they need doing. Knowing I can have that kind of power by writing a witty status message once every couple of months is kind of cool, to be honest.

In the early 2000s, I don’t think I had a status message at all. Friends that did had soppy messages about their girlfriend or boyfriend at the time. You know the ones. <3 followed by the initials of their teenage girlfriend or boyfriend, which, depending on the version of MSN you were using at the time, might have been translated into the ❤️ emote at the time. Or if they had recently broken up or been in a fight with the former bestie, maybe the </3 emote instead. I’m loathe to perpetuate the stereotype of emo teenagers and whatnot, but on some level, it’s a stereotype because that’s because that was pretty much what it was like. You had emotions, and often, you expressed them via status messages in MSN Messenger in that passive-aggressive teenager way. I’m not going to tell you about my feelings, but you can notice them for yourself by reading my status message. Maybe I just had those sorts of friends.

From about 2008 onwards, I proudly displayed what song I was listening to at the time using iChat, which worked with AIM (for my other Mac-using buddies), MSN (for all my high-school friends), and Google Chat (now Google Talk, Hangouts, or whatever Google are calling it these days) for my fellow nerds. At the time, iChat integrated with iTunes on the Mac and was able to dynamically update your status message to tell everyone how incredibly awesome your taste in music was, way before streaming music services were a thing — or as popular as they are these days. You know, back when playing music on your computer meant that you either have to have bought the CD, or have acquired the songs via some other — frequently less legal, even if it was via a friend-of-a-friend — method.

But all of that was a long time ago, and in case I needed yet another reminder that I’m getting old, IM services like AIM and MSN Messenger are dead and buried. They have been for years. Same deal for iChat, which died when Apple decided that sending SMS messages and iMessages via your phone/Apple ID was a bigger deal than being able to reach out to your friends and instantly have a conversation, even though that was basically the whole point of IM in the first place.

Cue Skype for Business, and its personal status messages designed for I-don’t-know-what in the corporate world. Maybe they’re supposed to tell your colleagues about what you’re working on, or like Microsoft’s official documentation, to tell others not to bother you over IM. That does seem like the most likely explanation, seeing as there are already other fields that exist for your availability/whether you’re in a meeting/on a call/presenting, as well as what location you’re working from — the latter of which has never been used more than now, due to the current climate of 90% of the office working from home.

A short history of my Skype for Business status messages:

Maybe once Teams supports personal status messages — a feature that even Discord has — I’ll switch over, but until then, I’ll be over here, making my colleagues smile whenever they’re scrolling through their contacts list, glance at me, and find whatever witty status message I have set.

Maybe once this is all over, I’ll make my personal status message “I survived a pandemic and all I got was the ability to work in an office.”