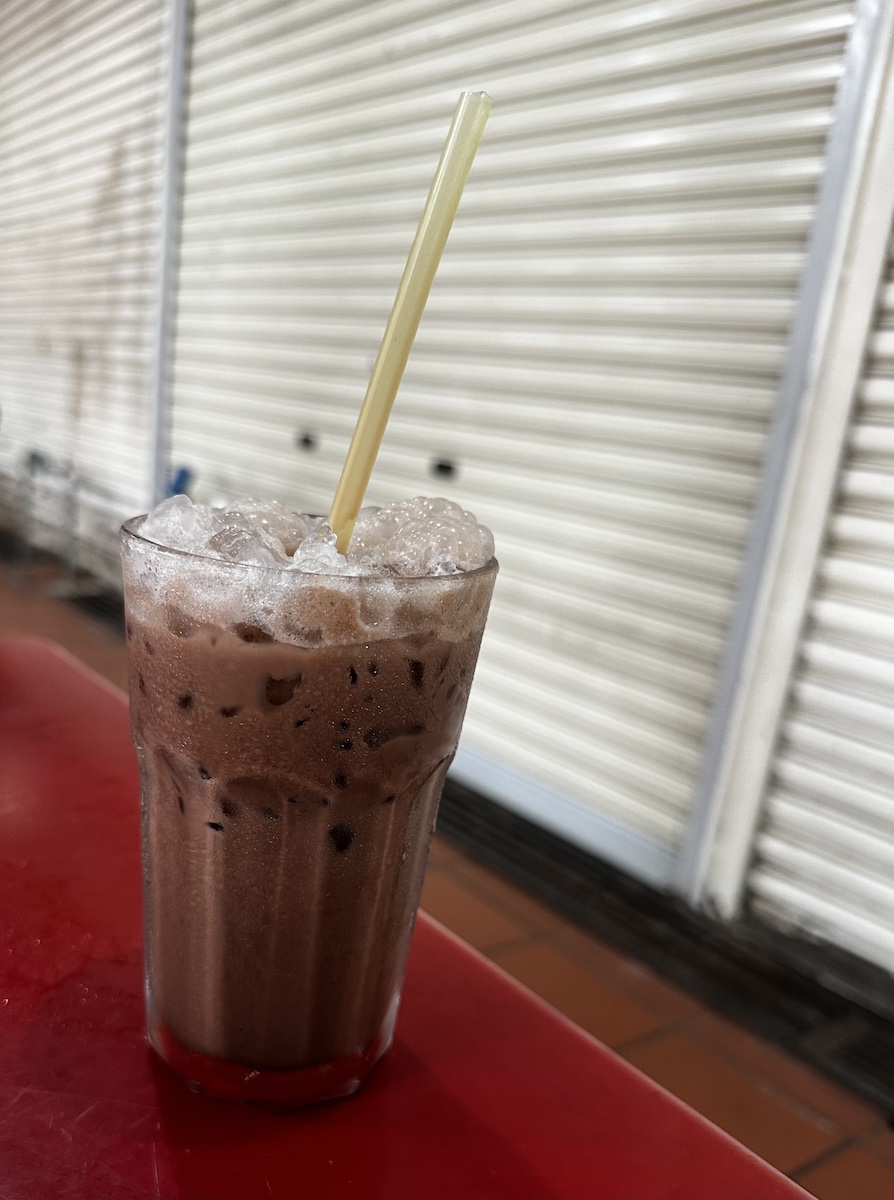 I’ve done it. After thirty one years on this big blue ball they call Earth, I have finally cracked the secret to making the most delicious drink of all time: Milo peng.

Now at this point, I realise that some of you reading this will have no idea what I’m talking about, so let me explain. Milo peng is a drink. As its name implies, Milo is a key ingredient, sure, but that’s about all that it shares with the Milo made with milk you’d normally have at home, or anything like the warm Milo that your parents might have made for you when you were young. Milo peng has a particular flavour to it that belies a simple combination of Milo and milk, and for the longest time, I wondered what the recipe was to make a staple of Malaysian/Singaporean culture.

If you’re wondering why you’ve never heard of this magical drink before, it’s because you can’t buy it in Australia. No cafe, corner shop, supermarket, or Asian grocery that I’ve been to, anywhere in Australia, has sold it. Trust me, I’ve looked. You might be able to get it at certain Asian restaurants here, but if you want the real deal, you have to go overseas, to Malaysia, Singapore, or perhaps a few other south-east Asian countries. There you’ll find it everywhere, but most likely at hawker stores, food courts, and most Asian restaurants. A good rule of thumb is that if the place has air con, you probably won’t be able to order it. There are, of course, exceptions to this rule, most notable of which is probably Old Town.

Milo peng is such a staple of my Malaysia trips that as far as I’m concerned, it’s become synonymous with the country. Any Malaysia trip isn’t complete without having it at least once, and preferably you have it with every meal that you eat out. It even goes well with every meal!

For as long as I can remember, I’ve asked my parents about how to make it. Sometimes, when we arrived home from a trip to Malaysia, I would ask them, and they would typically be coy about it. Either they didn’t know, or they weren’t 100% sure. My dad seemed to think that the key ingredient was condensed milk, but on the few occasions that we tried making it at home, it didn’t taste anything like the original. After a few years of this, we stopped trying altogether, and eventually, I stopped asking.

When I still lived at home, we’d go to Malaysia every two or three years. It was always nice seeing cousins I hadn’t seen in a while. The last time I went back was 2017, and thanks to this global pandemic we now find ourselves in, I haven’t been back since. With Milo peng cravings reaching stratospheric levels, I finally decided I would take matters into my own hands. If my parents didn’t know how to make it, surely the internet did?

As it turns out, the internet sort of does and doesn’t. I couldn’t find any definitive recipe or guide to making it, as least none that was in English. There were a few blurry-cam YouTube videos, but one was all I needed to know the ingredients; reason being I thought I’d be able to figure out their exact ratios myself.. As it turns out, my dad was right all along. While Milo is a key ingredient, condensed milk is the other one.

Fill your cup with roughly three quarters of ice cubes. In another cup, pour about two tablespoons of condensed milk, along with two to three heaped teaspoons of Milo. Add hot water to the condensed milk and Milo, and stir well. Once it has been mixed down, pour it over the cup with ice and serve.

My only wish is that I wish condensed milk was easier to work with. It’s awful stuff; sticky and non-viscous enough to be annoying. If you’re not careful you’ll easily have a huge mess to clean up, especially if you use the canned stuff. Luckily, the much better (and far less messier) alternative is the version that comes in a handy squeeze bottle. They’re supposed to be used for decorating cakes and whatnot, and you’ll need more squeeze bottles than if you purchased cans, but it’s worth it for not having to clean up afterwards. Squeeze the condensed milk into your second cup, add milo, add hot water, and stir.

I also wish it were easier to prepare and didn’t require the use of two cups. Yes, you could theoretically use one cup to mix the condensed milk and Milo, add the hot water, mix it all down, then add your ice cubes, but doing so requires you to be familiar with the quantities at play so you don’t end up with too much or too little milo peng. Plus, I’m convinced pouring your hot condensed milk and Milo mix over your ice cubes helps even out the temperature of the beverage, when compared to adding on the ice cubes after. The second method means its more likely that the bottom of the Milo peng is warmer than the top. Whether you prefer this kind of temperature differential in your Milo peng is up to you; I am impartial to it and enjoy both variants equally, but for temperature consistency the first pour-over method is best.

By the time you read this I’ll hopefully had many more real Milo pengs of my own, on account of being in Malaysia. But thanks to the magic of post scheduling, I didn’t add a “stories from the road” prefix to this particular post, in the hopes that there would be other stories I could write and post about. We’ll see.

Yes, I know we’re missing a few years. Time is a fickle thing in a global pandemic, becoming both stretched in some instances, and compressed in others. Before you know it, two years has passed in the blink of an eye, and with it, any chance of posting anything around my usual birthday. We’ll make up the years, I’m sure.