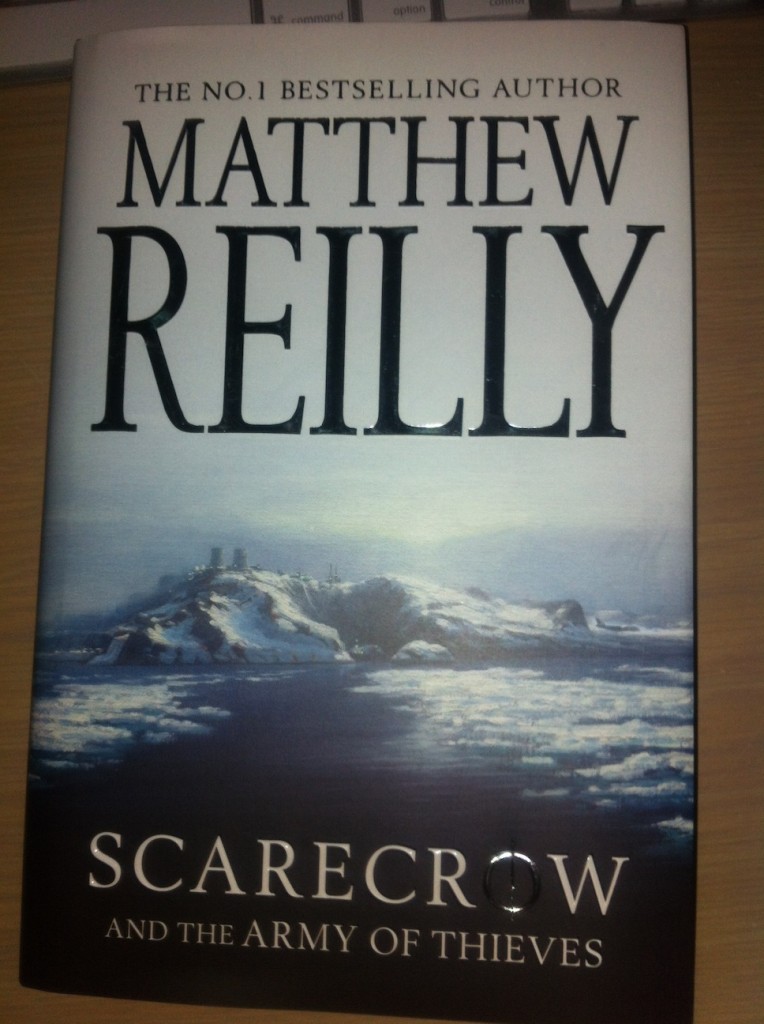 Today I went and bought a book. While I knew the release date was fast approaching, I had no idea when I left the house this morning that today was the day. A quick tweet to my local bookstore for them to put a copy aside for me, a few pages read while waiting for files to copy from A to B, and the rest read as soon as I got home this afternoon, and there you have it.

Ultra short review: after finishing this, my mind was exponentially blown. Just when you think it’s all over, and that it can’t get any more intense/fast-paced/hugely, massively more epic, it punches you in the face and ramps it up yet another notch. The plot is too massive to even think about, so incredibly creative that it’s amazing; as far as I’m concerned, the epic storylines means that Reilly is up there with the best of them, including my other huge favourite, Dan Brown (haters gon’ hate).

Incredibly highly recommended, especially if you’re a fan of the Scarecrow series, or like a stupidly-fast paced, crazily-intense, all-out-action read that still manages to pull you in hook, line, and sinker with the story.

…and I don’t feel special for it.

I think something has to be said with regards to this – Matthew Reilly, of all people.

It’s not that I don’t think he’s a literary genius – I do, he’s absolutely brilliant in all respects, it’s just that, well, it didn’t lack the “sparkle” I was expecting.

I’m not actually sure what I mean by “sparkle”, by the way. He was an excellent, captivating speaker, and he managed to keep the auditorium enthralled the whole time (much the same way he does with his books), so it’s definitely not that.

After his talk, we waited for him to sign books. This isn’t unusual – hugely popular authors like Mr Reilly have huge lines to get his autograph on a couple of books. Personally I managed to get The Six Sacred Stones and The Five Greatest Warriors signed, completing my Jack West Jr trilogy (he had previously signed my copy of Seven Ancient Wonders), but I also managed to get my Scarecrow trilogy signed as well, which was a plus.

I don’t know – maybe meeting him revealed someone who I just wasn’t expecting, the guy with the DeLorean, the life-size Han Solo in carbonite, the guy who takes pictures of his TV in order to use them as his screensaver… Actually going and meeting that guy who managed to keep me up till 3am in the Uni exam period, hooked on The Five Greatest Warriors, was something else.

It was funny – because when it was my turn to get my books signed, I had hoped I was going to say something witty. Something snappy. Instead, I managed to mumble some lame attempt at a joke that went something along the lines of “No, I wasn’t waiting for The Five Greatest Warriors because I had resolved to just forget about it, making the release date come all the more faster” or something along those lines.

There was also an awkward moment at the start where I went to shake his hand, but he had a pen it it – I partially withdrew my hand, only to have him put the pen down and shake my hand. Sigh.

In any case, I don’t think I’ll enjoy the Matthew Reilly books as much now, but not because he’s a crappy writer or anything like that. Sometimes you’re better off not knowing, you know? I don’t mean this in the sense that he’s a bad guy – it’s just that sometimes, the mystery keeps you going. Keeps you in the game. Now that I feel like I know the man that little bit better, there’s no more mystery.

I think it’s the same with Dan Brown, another fiction writer I also enjoy (although some say I shouldn’t). If I ever met him, I don’t think I’d enjoy his books as much anymore – and again, not because he’s a bad writer, but because – there’s no more mystery surrounding him. He’s no longer some person who sits at a desk, pumping out good-quality book after good-quality book – instead, he’s just some guy, with glasses, who does this, and talks like that. (Having not actually met Dan Brown I’m not sure what mannerisms he would have, so I’m doing my best here :p)

Just one of those things, you know?

I’m yet to talk about why I didn’t enjoy The Five Greatest Warriors as much as I did some of his other books – but that’ll come later, I’m sure.

This post part of Blogtober 2009, where I try and write at least one blog post every day. Most of the time they’re not hugely substantial – a quick snap there, a quick viral video there – but this time, substantial comes into it’s own.