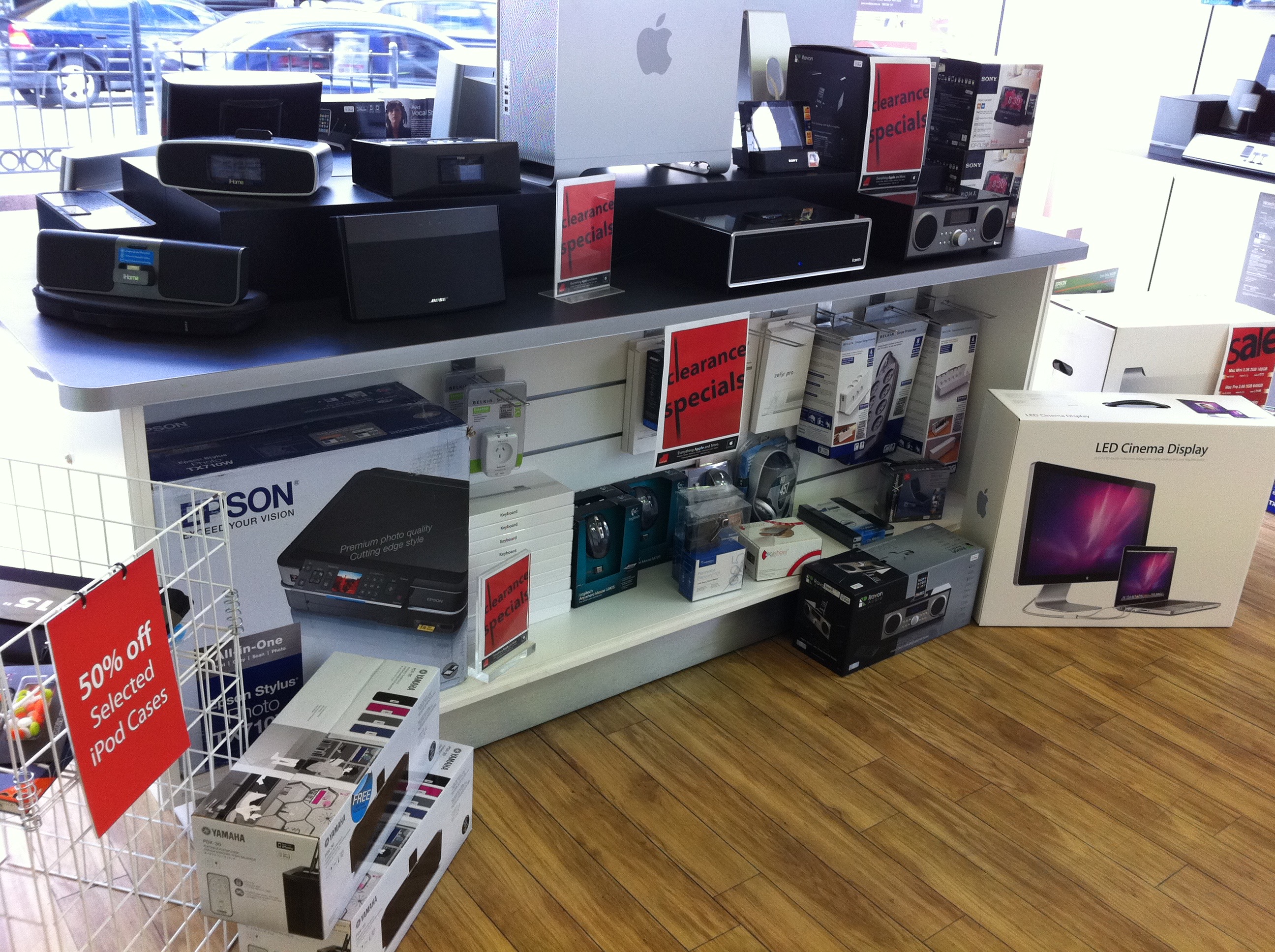 I have plenty of stories from my time at Next Byte. Maybe one day I’ll even write about a few of them, once I’m a little more comfortable the statute of limitations has passed. The one I’m telling you about today is about the music we listened to while in the store, but also about the music I listen to.

Background music. Unless there is none, you never really notice it. Which is exactly how good background music works, seamlessly blending into the background of whatever you’re doing, and subtly preventing an eerie silence from descending. If you’ve been to any retail store lately, chances are it’ll be there if you listen for it, but otherwise it’s just providing a little filler noise to create a comfortable atmosphere to do your shopping in.

In the early days at my place of employment, there wasn’t any mandated background music. No specific genres, and certainly no set playlist. That meant we could, more or less, play whatever music we wanted. Provided there was at least some reasoning applied about what was and wasn’t appropriate for the retail setting we were in, we were given total freedom over what we chose to play, and there wasn’t really any limit on what could and couldn’t be played. No death metal and nothing religious, obviously, but pretty much everything else was fair game, or at least was until someone questioned it. After all, it was just background music. It was supposed to be unnoticeable. Maybe not unremarkable, but certainly not outlandish enough to draw attention.

And boy, did we play pretty much everything. There was a lot of pop, which I was completely fine with. But I remember a lot of indie stuff being played, a lot of soft-rock, gentle/casual stuff, and plenty of stuff from Triple J, back when it was good. Even plenty of stuff from local Tassie artists and bands, which I thought was pretty cool. It was sometimes surprising what we got away with, but it turns out that if you play something quietly enough, no one notices. Which is perfect for background music.

Because we were an Apple retailer, an added bonus was that we got to play it on some truly great sound systems. There was the venerable iPod Hi-Fi, of course, which we used an AirPort Express to AirPlay music to. When Sonos systems became a thing, we started using the Sonos Mac app even though it didn’t integrate with iTunes to begin with; I think we started using (the now-defunct) Rdio for that specific reason.

We had plenty of iPod docks as well, none of which I remember the names of now, but the real standouts were always the higher-end docks and speakers from brands with known sound chops. Bowers and Wilkins was the most memorable of these. Even when the store was busy, no one really minded if you turned up a good-sounding dock to drown out everything else for a few moments, if you were doing it for the purposes of demoing it to a prospective buyer. Blasting something, anything, was certain to draw the attention of everyone in the store. Customers and staff alike would have their conversations interrupted momentarily and look up to find the source of the din. But even then, raising the noise level above ambient was fine as long as you didn’t play anything questionable, or turn it up too loud for too long, they realised soon enough that you were just giving a demo to a customer, and went back to what they were doing.

For that reason, we had pre-prepared playlists of retail-appropriate background music ready to go. They contained easy listening tunes we liked. Music that created a chill atmosphere. Remember, all of this predated music streaming, back when people purchased their music off the iTunes store or acquired it through other means. Playlists were a much bigger deal because in those days, you couldn’t just outsource your playlist creation to everyone else or just let the algorithm take the wheel (all praise the mighty algorithm). When we were doing our prep for the day, we’d start a song from one of several playlists, set iTunes to shuffle and repeat all, and that would be it. The best background music was entirely set-and-forget.

But on the days that I worked, I occasionally eschewed the normal playlists in favour of my own. Sometimes my playlists were exclusively newer pop hits or whatever brand-new album I had purchased at the time, and other times they contained my favourite subset of the existing retail playlists mixed in with a few of my pop favourites.

Whether intentional or not, these playlists meant that other staff would hear the same songs, over and over, on the days that I worked. There was nothing wrong with the tracks I had in the playlists, but by some accounts there may have been too few of them. This meant that some songs were played more than once per day. Generally not more than a couple of times per day, but over consecutive days, it became noticeable.

END_OF_DOCUMENT_TOKEN_TO_BE_REPLACED 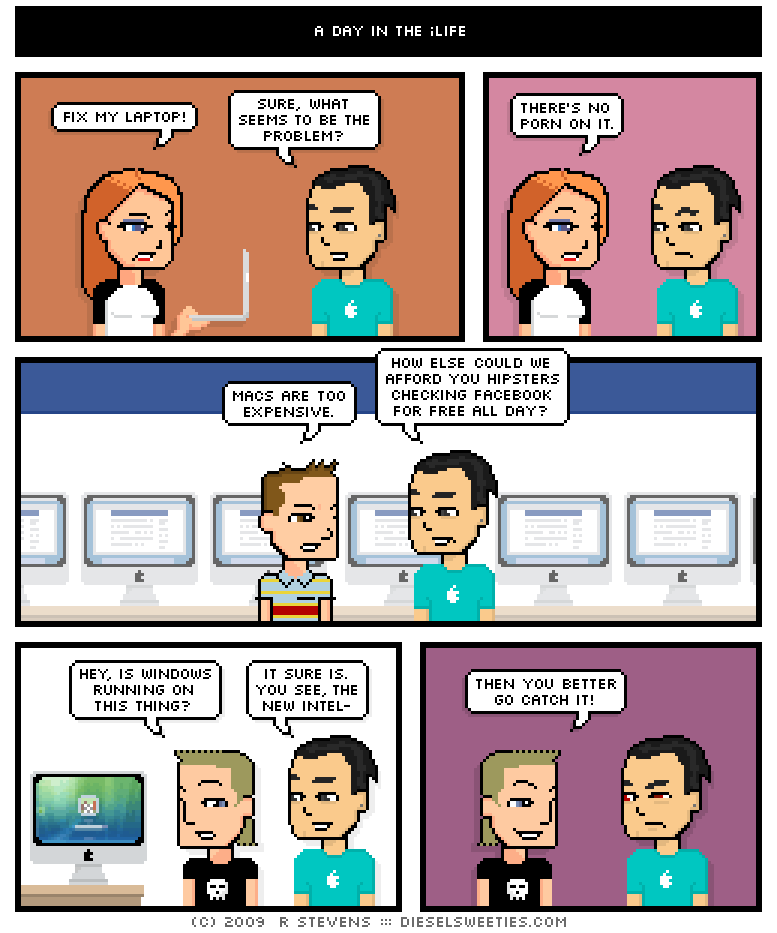 via diesel sweeties: 8-bit robot romance webcomic and geeky t-shirts : A Day in the iLife.

Even if you haven’t worked in an actual Apple Retail store, it’s still damn true.

Be aware that there’s A LOT of swearing. Like, A LOT OF SWEARING.

It’s funny as hell, though – especially if you’ve worked in Retail, or in any customer-service related capacity.

Thanks to Mactalk Forums for the link – if you’re a member, hit up this link for more retail horror stories (link requires membership).