Alternate title: And Now, For Something Completely Different 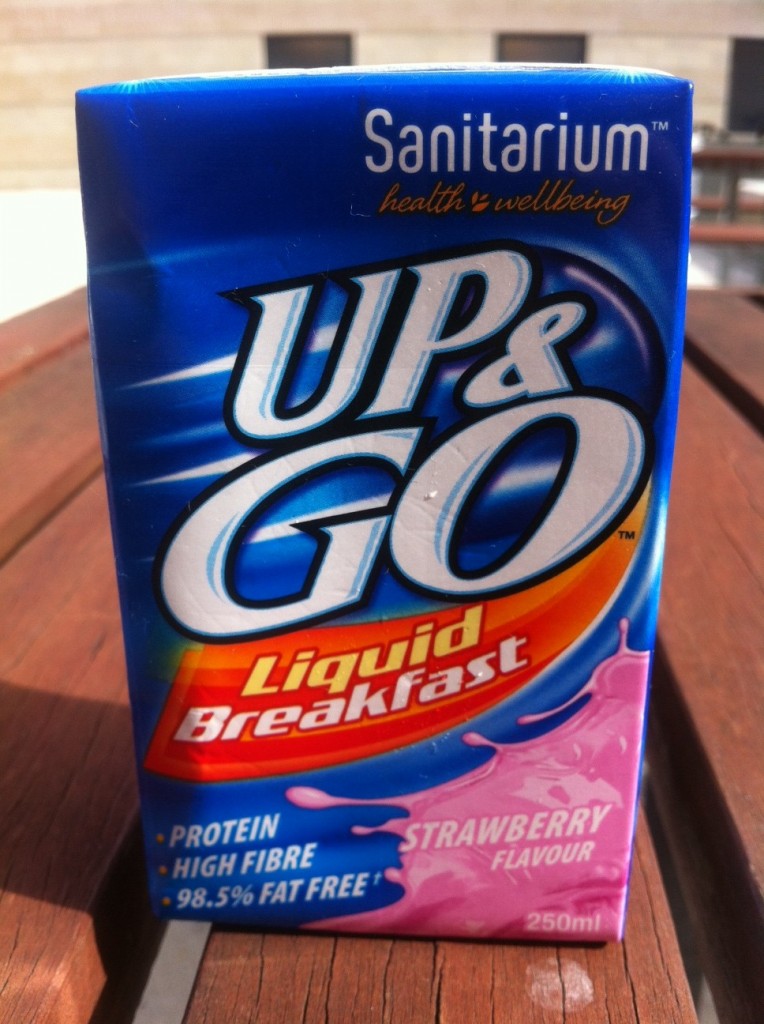 Yes, I still have a few different posts in the cooker, all waiting for the right time to be written. Some days you just get a million and one thoughts on whatever random thought pops into your head, and sometimes, you feel like writing about exactly none of it. Such is life. Anyway…

You know how sometimes, looking at or doing something can evoke a memory from the distant past?

Yeah. I have one of those moments every time I see Up and Go.

For the uninitiated: Up and Go is like a drink, right. It’s made by the Sanitarium company, and it’s kinda like a liquid breakfast replacement, and it’s spectacularly delicious. Tastes kinda like sweetened soy milk, except it’s more viscous, having the same viscosity as, say, a slightly runny milkshake. It tastes like milk, for the most part, at least the kind of flavoured milk you buy in cartons. All up, it has a flavour and texture that’s uniquely hard to describe — it’s similar to a few things, but the same as none of them.

The packaging proudly proclaims that it has all kinds of things-that-are-supposed-to-be-good-for-you. It has protein! And it’s high in fibre! And it’s 98.5% fat free! I’m unsure about what kind of dietary benefits it actually provides, and as for it being a liquid breakfast… well, it does mean you can get up and go find a real breakfast, preferably in the trendiest little coffee shop you can find. It won’t give you wings or anything like that, but it is pretty tasty.

Far and away though, the thing I love most about Up and Go is the memory it evokes every time I see it in the supermarket, (inevitably) buy it, and then drink it. And you thought you lived a sheltered life: I was only introduced to this stuff way back in 2006!

I remember it clearly: we were on the Year 10 Outdoor Ed camp, a 5-day hike through some fantastic bushland (I forget where) with only what we had in our ruck. It was the third or fourth night when we camped right near a river, and one of my friends had this great Up and Go stuff. I mentioned I hadn’t tried it before, so she gave me one of hers. I read on the package that it was best served chilled, and it was either then that she or I came up with the idea to put it in the river overnight so it would be chilled by the next morning. I think it was mentioned half-jokingly, but being young and foolish I did so anyway…

The next morning, I awoke and eagerly went to check on my Up and Go so I could, you know, up and go for another long day of walking. It was then I discovered the Up and Go was very well chilled — I poked the included straw through the hole, and suddenly, tasted the most incredible beverage ever.

It was a fresh morning, but that was nothing compared to how intense this Up and Go was. From that point on, I was hooked — and now, every time I go interstate or house-sitting with friends, I try and track down a bottle or few boxes of Up and Go. That stuff is crazy good.

If you’re up for something new and have never tried Up and Go before, get a single box the next time you’re at the supermarket or at a corner shop. The 250ml package you see above comes in a 6-pack, but if you want just one hit, get the 750ml variety (I think). Enough to keep you up and going well past morning tea, at the very least…