Realising that the above title could have meant that this post could been about DayZ, or about a new film camera: priceless.

As much as I enjoy shooting film, using cameras from the 60s (and especially at the sub-$100 price range) mean you do without some of the modern niceties such as autofocus and autoexposure. In the beginning, that was okay — even without a working in-camera light meter, it was okay. Guessing exposures was pretty educational at the very least, and photos that turned out “good” were all the more satisfying because I know I had more input that I would have had if I had used a modern DSLR.

I’m not saying that you get sick of setting the exposure, then manually focusing the shot, but after a few rolls it starts to get a bit old. I wanted something that was easy to shoot film with, something with good enough optical quality, and something that was much more compact than the behemoth of my Yashica Lynx. 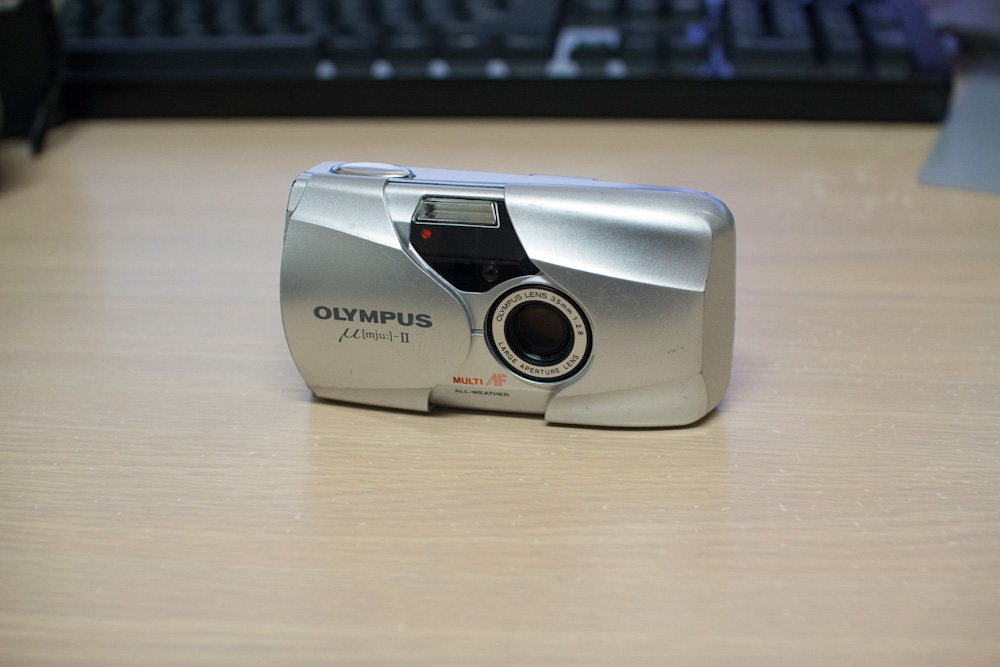 Cue the Olympus mju II. Also known as the Stylus Epic in the US, it’s a small film camera that features autofocus and autoexposure — even the text printed on the back describes it as an ultra-compact 35mm camera. It fits into basically any pocket, has a super-fast startup time, and best of all, shoots film. You’ve probably seen one of these before, and for good reason: it was an extremely popular camera, back in the days when film was much more popular than it is now.

My only complaint about the mju II is that the viewfinder is… tiny, to put it nicely. It’s perhaps half the size of your thumbnail — which is minuscule compared to the viewfinder on your typical DSLR, and if you don’t put your eye up to it at exactly the right point you’ll see nothing. Once you get over that, it’s a nice film camera which seems to want to fire the flash more often than is truly necessary. My version also has one or two issues with loading film, which means loading a new roll takes a minute or so longer than it should, but it’s really a non-issue because everything else is perfect.

The Olympus mju II has a fixed 35mm lens that has a maximum aperture of f/2, and I’ve heard quite a few people rave about how good it is for its size, and especially compared to some of the higher-priced point-and-shoot film cameras. Maybe if I had a few thousand spare I might have gotten a Konica Hexar AF instead, but for now, the mju II was the better choice. It came in a zoom version as well, but apparently the prime version has better optics…

And it’s such a blast to shoot with.

Instead of lugging around the ol’ ball and chain around your neck, you’re simply reaching into your pocket, sliding back the cover, and taking the shot. You think less about the technicalities of taking the shot, and actually take the shot.

It’s easy. Effortless. It means that good pictures as easy to capture, because all you’re doing is depressing a shutter button — and sometimes, that’s exactly what you need to do. Sometimes it’s about the shot itself, rather than setting up the aperture, shutter speed, and then focusing the lens.

But why not do the same with digital, you might ask. After all, there are plenty of good point-and-shoots available for the digital format, some vastly more capable than this little Olympus. That, my friends, is a question for another time.