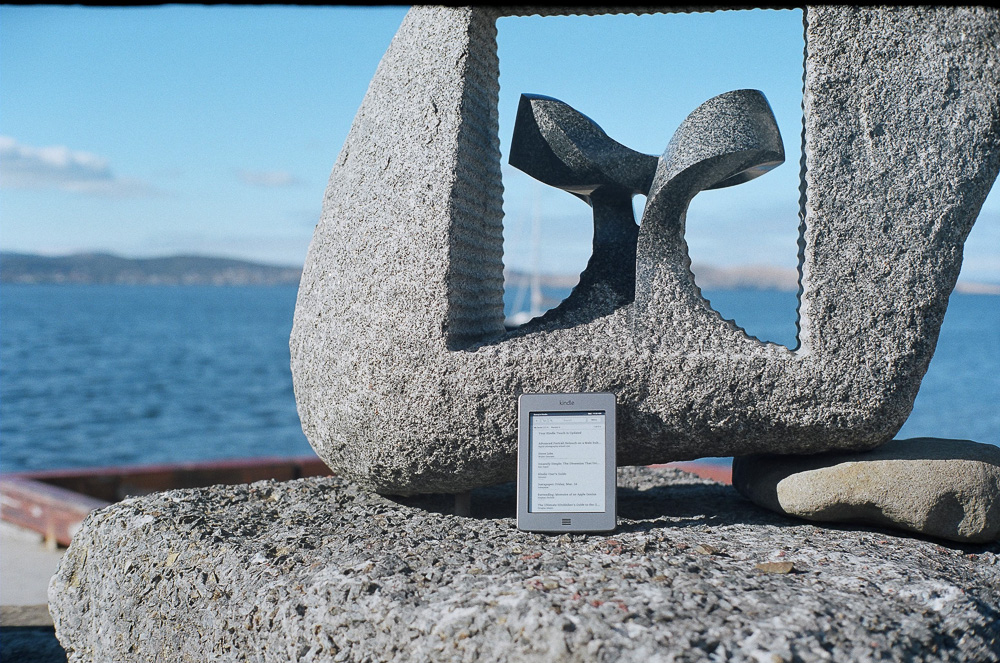 I had honestly wanted to write a review of this new book reading gadget after actually finishing a book on it, but after buying a Kindle Touch over 6 months ago, that still hasn’t happened. It’s not that I’m not a slow reader or anything, it’s just that I don’t think I’ve gotten used to the idea of picking up another piece of technology to read a book, instead of, you know, picking up an actual book. (And plus, the Steve Jobs biography is a pretty massive book to cut your teeth on. And, to be honest, I haven’t made the time to just sit down a read.)

There are a few things that appeal about the Kindle Touch:

Reading with e-ink is a little strange to get used to. It’s not altogether bad, just different. It replicates the reading experience of a book very well, even if it doesn’t have the same texture nor feel of an actual book. Really, the only issue with the e-ink display is reading in dimly lit environments — just like a real book, you need to turn on a light.

The response time of e-ink is perhaps the only real sticking point for potential Kindle users to be aware of. It’s something you’ll definitely notice if you’re coming from any other kind of display tech, unless you’re used to half-second refreshes. It’s totally fine for simple reading, but might present an issue if you’re trying to actually get things done on the device. It’s no productivity machine, and the built-in keyboard, whilst good for the odd Amazon store search or the occasional annotation, is best used where speed isn’t a priority. 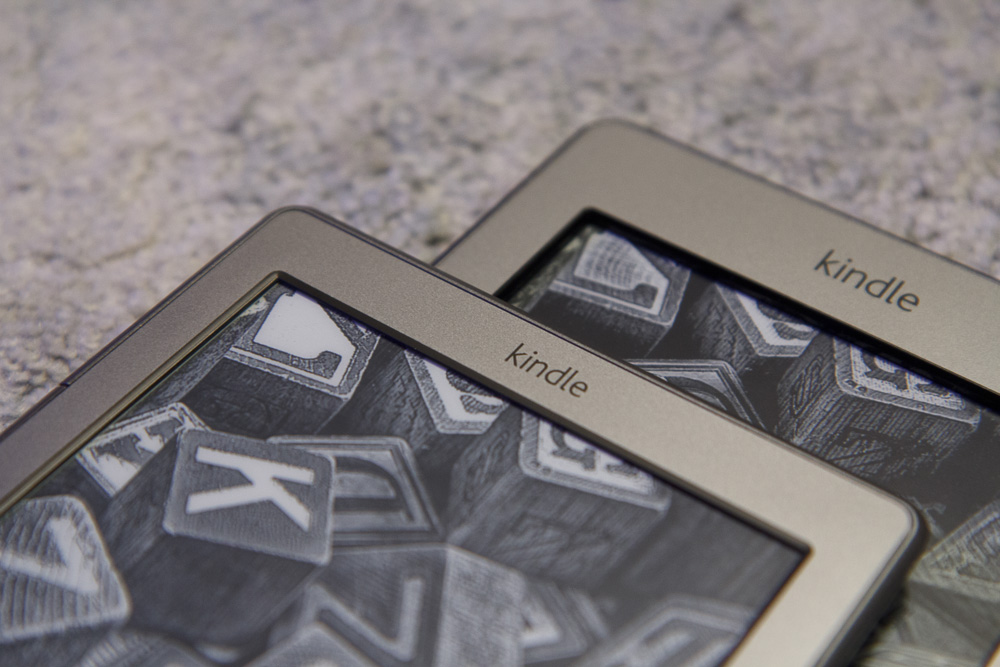 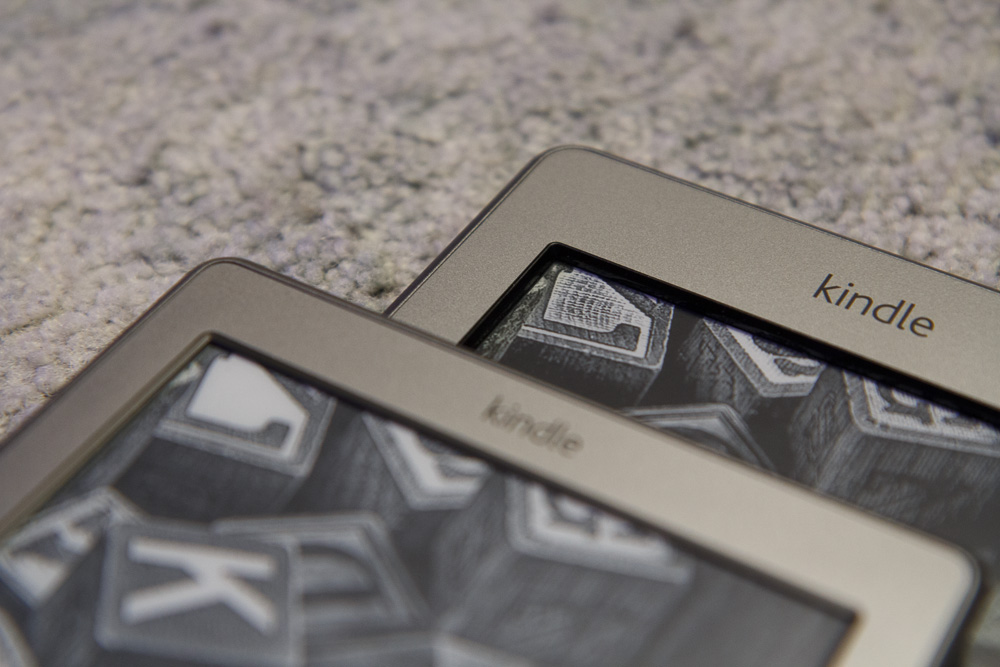 But why the Touch version of the Kindle, rather than the normal, non-touch version? As much as I wanted a version of the Kindle Touch with physical page-turning buttons, Amazon don’t make such a device. Instead, the Kindle Touch is a capable device in it’s own right. Just about the only thing you might notice is the slightly more inset bezel compared to the non-touch, which means light can cast shadows more easily, as well as giving the device a more inset feel. It’s strange, especially coming from an iPhone where the LCD is as close as humanly possible to the glass so it feels like you’re touching the pixels. Not a huge deal, but definitely something to be aware of.

Book purists amongst you (apparently that’s a thing now) might scoff at ebooks. And honestly, I kind of do as well — there’s nothing like sitting down with a good book, feeling the paper on your hands as you turn the pages of yet another gripping tale. The last physical book I bought was probably the last book in the Artemis Fowl series, back in July — and why? Because I already owned every other book in the series in paperback format. At one point I even experimented with iBooks on the iPhone, seeing if I could read Artemis Fowl: The Atlantic Complex entirely in iBooks, even when I already owned the paperback version of that, too — I could, but it just wasn’t the same.

But you know what? Books might have battery life measured in decades, but they’re heavy. They might feel exactly like a book should, and I might be able to lend them out to others, but I can’t highlight and annotate passages (more out of respect of the book than wanting to go mad with a highlighter through my books) like I can on the Kindle. There’s no instant delivery — I can’t decide I want a book, search for it, and have it on my device in seconds.

The Kindle brings books to those who don’t have the space for a few books here and there. The Kindle makes books accessible. The Kindle means no delivery fees, no waiting — just books on demand. More books than anyone could ever read. There’s no such thing as a “sold out” book on the Kindle.

So I’ll continue to buy both physical books, mainly for authors that I really enjoy, and books on the Kindle. Maybe I’ll even buy both versions of a book, and then wonder why my place isn’t synchronised across books — then I’ll realise dead-tree books don’t have Wi-Fi, find my place, and read on.

All in all, I like the Kindle Touch. It’s a great device for reading, Amazon’s book selection is extremely good, and the hardware is on par for a device meant for long usage periods.

Now, if only they sold a version which had some kind of in-built light… and if only I had more time to read books on the thing, maybe I’d actually have finished the Steve Jobs biography by now.

The last session of WWDC ‘09 yesterday was about publishing on the App Store. The content of sessions is under NDA, so I can’t tell you what it was about. So I’ll tell you what wasn’t in it: the audience Q&A session that succeeded nearly every other WWDC session and usually provided invaluable access to Apple employees and useful additional knowledge to attendees. The session itself blew through its lightweight examples quickly, ending 45 minutes early. The majority of the audience was clearly there for the Q&A. As people lined up at the microphones around the room, the presenter abruptly showed a simple slide with only “WWDC” in plain lettering, thanked us for coming, and bolted off the stage. The Apple engineers, usually staying around the stage for one-on-one questions, were gone. The lights came up instantly, and it was the only session that didn’t end in music. The audience was stunned.

via Marco.org – Trust, hostility, and the human side of Apple.

Before there was the Apple Store that we know and love today, there was the Apple Cafe — well, almost. On November 12, 1996, Apple announced plans to open a chain of cybercafes around the globe. State-of-the-art, even by today’s standards, Apple Cafes promised health-conscious food (served up via a high-tech ordering system), video conferencing with neighbouring diners, and on-demand access of movies and music videos. A screenshot from an old promo gives us a few clues as to how some of this might have worked.

via Guifx Blog : Blog Archive : The Apple Store That Almost Was. 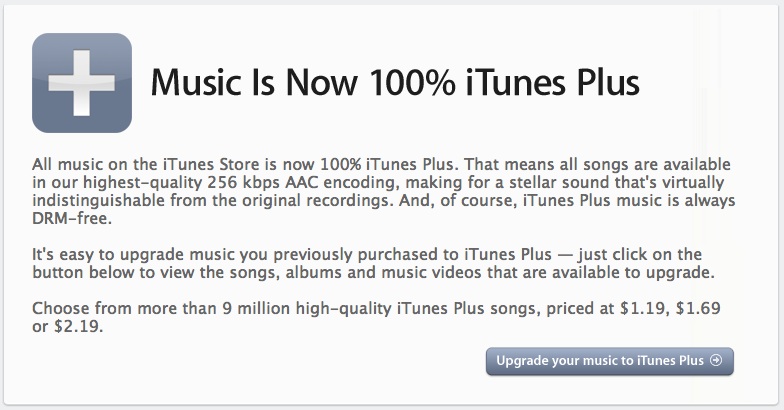 Sure, $2.19 a song mightn’t sound too pretty, but it’s not all bad. Most of the songs in the Top 100 list of the iTunes Music Store are still at the old $1.69 price point, but now they come with less DRM, and at double the bit-rate.

However, the part that sucks is that 4 songs out of the Top 100 are at the new $2.19 price point. It’s interesting to note that those artists with $2.19 songs are all signed onto Sony for their label – Rihanna, Jason Mraz, Beyonce – Akons on there too, but I think he started his own label?

It’s not all bad. I certainly won’t be switching to BigPond Music anytime soon. 😀

It seems that Google is out of ideas for their iPhone application, Google Mobile, when they are struggling to find things to put in the “What’s new in this version” and resort to putting “Enhanced version number”.

via Google Out of Ideas for iPhone App – MacTalk Forums.

This is serious gold…

Take a look for yourself:

Or, if you really don’t believe me, hit up the Google Mobile App page on the App Store here.

In any case, I managed to LOL. It’s good to know that these guys have a sense of humour.