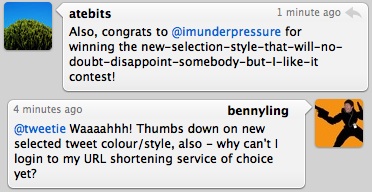 There’s a strange phenomenon that happens almost every time someone joins Twitter. They hate it. At least at first.

But many of the people who once hated Twitter — or at least, didn’t quite get it in the beginning — are now many of its most active users and raving fans. So what’s going on here?

There seems to be four natural stages that the average Twitter user goes through from the point of first trying it until the point of fully embracing it and making it a part of daily life. Obviously, not everyone sticks with it and becomes a Twitter devotee, but there’s definitely a growing cadre of people who believe that there’s some magic happening in the Twittosphere.

via The four stages of the average Twitter user | Between the Lines | ZDNet.com.

via Things Twittered « GraphJam: Music and Pop Culture in Charts and Graphs. Let us explain them..

Let me just say – if this is you, and you’re on Twitter, then YOU’RE DOING IT WRONG!

Follow people who talk about topics that you care about, eg blogging, “social media”, wordpress. If someone becomes an obnoxious tool, unfollow them.

Stone admits that yes, Twitter is fun. “But more importantly, the use cases we see emerging tell us that Twitter is a minimalist communication tool that is very powerful,” he says. “The Mac is the same way. It offers beautiful design, simple elegance, and a system that’s incredibly flexible and powerful to use.”

Sigh. I’m such a fanboy.

Proudly brought to you by the letter B, I suppose…

In my opinion, the most commonly heard complaints about Twitter stem from a misunderstanding of it. Chief among these complaints is the utterly bunk assertion that it’s just a whole bunch of people heralding the trivial events of their daily lives into the void. (i.e., “I’m going to the bathroom now!” or “Eating a yummy ham sandwich!”) Frankly, if that’s how you’re using Twitter, you’re doing it wrong, and you should stop without subjecting your friends to a full week of that rubbish, let alone a full month.

Explaining Twitter to people can be always interesting, and as of late I’ve found that for most people “What you don’t understand, you ridicule.” I’ve had some interesting conversations around Twitter and how one would use it and why. I like this video, as it explains it without jargon or going in to technical details. (This would be one of the best I’ve seen).

iTR will automatically send you an email every time somebody “@” replies or mentions you on twitter. Its goal is to make sure you get instant notification when somebody is trying to talk to you or about you on twitter. It’s a great easy & simple system so signup today.

via iTweetReply – Get your twitter @Replies and Mentions Emailed Straight to you – Home.

This is actually awesome – not only does it email you whenever someone mentions your name on Twitter, but you can also reply to tweets by email, as well! ZOMG!

Thanks to @matthewlesh for this one.

These things all seem to start with Twitter, don’t they? In this case, this tweet pointed me to a link – which promptly 404’d on me. “Address Not Found”, said Firefox.

Hmm. I thought nothing of it until this morning, when yet another tweet came in. I tried the link contained within again, and, surprise surprise, another 404, with exactly the same error message. Now, I was curious. Why was I getting 404s? I tried the excellent website DownForEveryoneOrJustMe.com, and even that said noisypoppy.net was down.

As a preliminary step, I tried it on my iPhone over the 3G network. Funnily enough, it loaded fine there – however, still no joy on iPhone or Mac via Wi-Fi. To me, this said something about DNS.

Next, I tried the good old proxy way: proxy.org, and then any one from the list – lo and behold, noisypoppy.net actually worked. I was able to browse and interact with the website in a normal way – via proxy.

By this time I was convinced it was something to do with DNS. So off to OpenDNS.org – where I then plugged in the requisite IPs into my Mac’s DNS entires (after the Internode ones on my router). I try and load up noisypoppy, and what do you know, it works perfectly. Curiouser and curiouser…

I managed to subscribe to the RSS feed (so I don’t have to go and manually check the website), but now when I go and try and read any of the articles from NetNewsWire, it still manages to 404 on me.. 🙁

Why won’t things just work? And here I was, thinking the internet was downright infallible… 🙁

If you think you’ve got a solution for me to try (or think I’ve missed something), shout out in comments.

Right, last one. I promise 😛 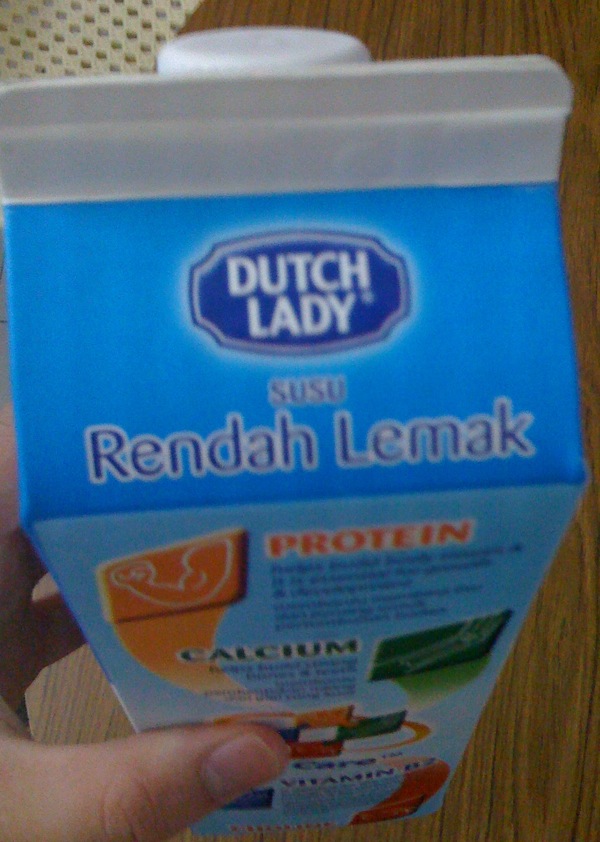 So, what you’re looking at there is a carton of my new favourite milk. Unfortunately, it’s only available in Malaysia, but that’s okay, because we have more than enough of the real thing down here in Tassie anyway! 😛

So in case you’re wondering, it is very tasty (somewhat similarly to the real thing). It’s also got protein, calcium, and all the vitamin B2 stuff to make you feel all good inside!

There’s just something about dutch women in general, actually – blonde hair and blue eyes can be *stunning* when put together in the right combinations… Mmm. 😛

But I digress – surely there’ll be more on that later. Either that, or follow me on twitter to read more. I can’t guarantee how much dutch/blonde related tweets there will be, as my blog and twitter are both fully exposed to the public, but like @beaugiles put it – “tweeting with protected updates is like streaking while covering your privates. It’s not fun!”

Right you are. Dutch ladies for the win. 😛

Haven’t done this for a while, so here’s a few links that I’ve picked up from the interwebs these couple of days…

COÖP
Sure, it’s flash. But it’s damn cool anyway! Sorta like a LED-scrolling name badge, but in the standard OSX-style tickbox instead. From what I can gather, it’s some sort of design-based website. Thanks to @decryption for this one.

start.io
This has been labelled “Web 2.0” at it’s best – and it’s not hard to see why. Essentially, start.io is a collection of links for your customisable pleasure, that anyone can access. You can sort you links out, and then people who have similar interests to you can see which websites you like the most!

40 Excellent Logos Created with Helvetica
Could you spot Helvetica from a mile off? Okay, name a brand that features Helvetica as it’s logo. Name two. Name another? In any case, this site decides to showcase 40 logos that have two things in common: they’re all awesome, and they’re all based off Helvetica.

Bloody Scammers
This is a JPEG link that shows an interesting conversation between a Skyper and a scammer. Well, at least the scammer was honest?

Sad Roo Is Sad
Another JPEG link, again from Twitter, this one shows a kangaroo – with what seems to be a tear. Awwww….

RSS Lamp Shades
Aw, c’mon now. This is just too awesome not to share with you. I mean, nothing says “web geek” better than RSS Lampshades. Now, if only they made Facebook or Twitter ones…

Have Gadgets Turned Us Into Lazy Morons?
Well, have they? There’s an amusing graphic on the page that shows the evolution of the human species, you know homo erectus, etc, and at the end, there’s this pic of a guy hunched over a computer keyboard, peering into a monitor… Gold.

Periodic Table of Game Controllers
I love how they’ve left out the actual outlines of the controllers themselves. Full size is an epic pic indeed, you can view it here. I’d love to have this in my room, blown up to poster-size and hanging on my wall…

Periodic Table of Typefaces
Just like the gaming one above, this periodic table is once epic pic. I probably wouldn’t want it as a poster (just because I’m not a designer), but still – it’d be ultra cool in any case. Egads! Where is Verdana?! They left my favourite typeface out! 😮

It Takes Roughly 17 Hard Drives To Stop a .50 cal Armour Piercing Incendiary Round
This is excellent – guns and hard drives. Seriously, though – a .50 cal? Armour piercing? If all that wasn’t enough, incendiary? I’m so there, and you should be too. Not Safe For Work, because there’s death metal and lots of swearing.

Flammable Water
Not actually flammable water, per se, but the fact that a couple in the US managed to light the *gas* that was coming from their water supply? Sounds like another Humberto Vidal disaster waiting to happen. (As a side note, I saw the “Seconds from Disaster” clip about the aforementioned disaster… Things like that just shouldn’t happen.)

Laser Dial
No, it’s not a laser telephone. It’s got nothing to do with telephones at all, actually. Instead, think more along the lines of a laser sundial. It’s super cool, and I want one.

Masked Man Demos iPhone 3.0 Beta
This is a vid of a masked man (who likes to say like, like, a lot) who goes through pretty much every iPhone OS 3.0 feature you can think of. Or poke a finger at. See what I did there?

Sanwa’s Throat Microphone
Awesome throat mike is awesome. I want one, even if the only reason would be to look like a Navy SEAL/USMC Force Recon/Delta Op when I’m skyping, haha! 😀

5 Facebook Profile Pic Hacks
Very interesting. Very interesting indeed. I will have to look into doing one of these at some stage, just to “spruce up” my facebook a bit.