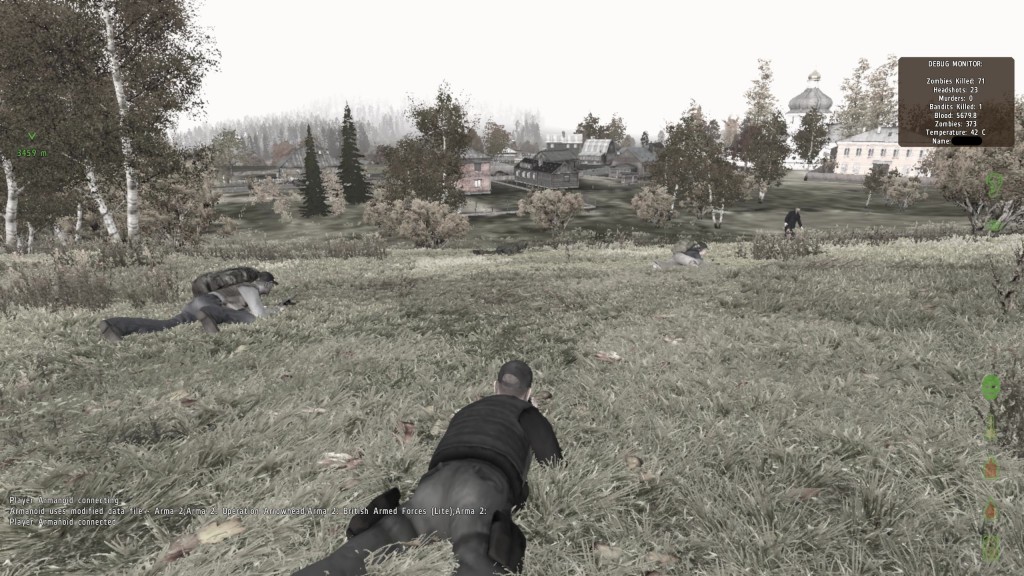 The quintessential DayZ experience: three guys in a field, about to loot through a town, with a single zombie in between them and beans.

It would be unfair to describe Arma 2 as anything other than a military simulation, as there’s so many aspects to the game itself — radios, ranging, realistic bullet physics, real weather, and so on. DayZ builds upon that, with a few custom weapons and, of course, zombies.

The way it begins is this: you’re dropped into a post-apocalyptic world, filled with zombies. You spawn on the beach, and what you do from that point on is entirely up to you, with the overall goal being to survive as long as you possibly can. Everything is out to get you (zombies, the environment, other players), and you start with basically nothing; I remember the days when you spawned with basic gear — a small pistol, a few bandages, ammo, and enough food and water to get you started. But a few weeks ago, the developer (Rocket) changed the spawning gear to be just a flashlight, a single bandage, and painkillers. Lest you starve or die of dehydration, your first task as a new Survivor  should be to find a few rations — perhaps a water bottle that can be refilled from fresh water sources, or a can of lovely mountain dew.

What you do from that point on is up to you.

Do you lone-wolf it and try and find some kind of weapon to defend yourself from the zombies? Do you continually roam around the cities in your never-ending search for supplies? Or do you gear up and see what the wide open world of Chernarus has to offer?

It’s this combination of military simulation, zombie apocalypse, and open sandbox that means DayZ is so compelling to play. There’s so many things to do — if you’re geared up well enough, do you start setting up camp (provided you can find a tent)? Or do you start looking for a better mode of transportation? And if you run into another player, what then? Shoot on sight, or let them live? There’s so many questions that are asked of you during your time playing DayZ, and you’ll have to make all the choices. Will you explore the big bad world beyond the two or three main coastal towns?

Some choices are easier to answer than others: if you’re temperature falls below a certain amount, you better find yourself a heatpack, or stay indoors until you warm up. If you catch a cold, you better hope you can find antibiotics in a hospital, lest you attract zombies with your coughing and spluttering, along with the gradual decrease in your blood level to half what it normally is. If you’re thirsty, you should drink, and so on, and so forth.

Some of your actions even have consequences: if you’re hungry, you should eat. Consuming an easily-found can of beans only replinishes around 200 blood, but if you happen to come across an animal that can be killed, gutted, and the raw meat cooked, you’ll find that replenishes much more blood (800), but requires many more tools. You’ll need to find an animal, for one, then you’ll need a hunting knife to gut it, a hatchet to cut wood for the fire you need to cook the raw meat, matches to make a fireplace, at which point you can finally cook the meat you found on the cow’s dead body. Enjoying your steak raw, sadly, is not an option when you need the blood.

There’s so many ways to accomplish the same thing in DayZ. You can, for example, light a fire to warm up, instead of going indoors or finding a heatpack. There are many ways to replenish your blood, too: you can eat (beans or cooked meat), or you can get a blood transfusion, with the latter option requiring another player and a blood pack — an item only found in one of the four hospitals in Chernarus. 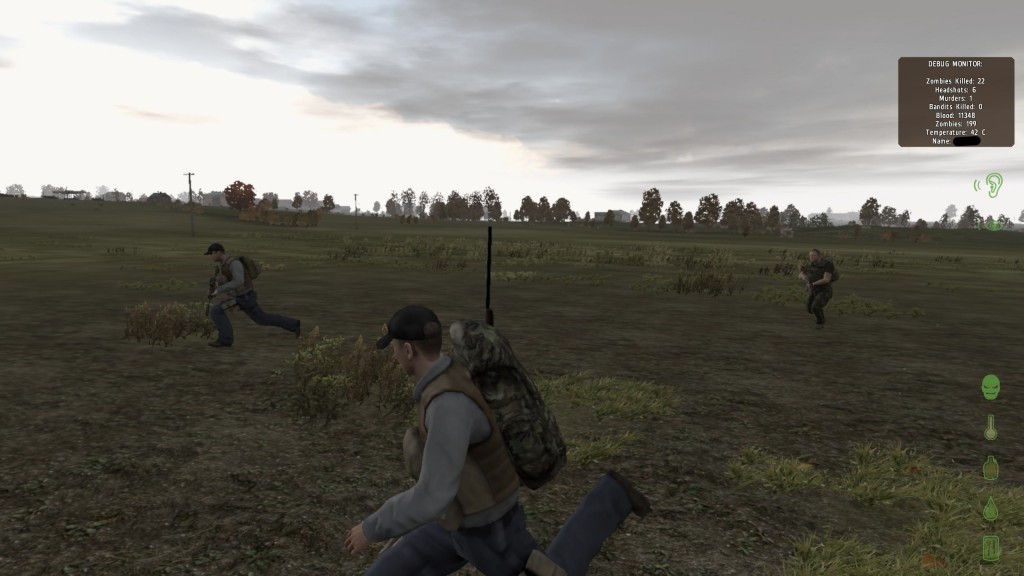 You'll do a bit of running in DayZ. Did I say a bit? I meant a lot.

It wouldn’t be a military sim without weapons, and DayZ is the perfect blend, weapons-wise, between realistic and military. Common weapons you can find include crossbows, double-barrelled shotguns, winchesters, Lee Enfield rifles, and a whole assortment of sidearms, from the humble Makarov (the previous starting sidearm), to the trusty M1911, revolver, M9, and many more. It isn’t until you start looking for higher-tier weapons that the real fun begins: you can find scoped hunting rifles like the CZ500, and then you get into the true military weapons: M16 and M4 variants, AK and variants, light machine guns like the M249, silenced sub-machine guns, and even massively overpowered sniper rifles like the M24, DMR, and 50-cal M107. All guns make a distinctive sound when fired, so you can tell whether a player is firing an M1911, or whether you should be running for your life any second now because he’s got the gun with the biggest range in the game.

And the zombies in DayZ? The zombies in DayZ hurt. If you’ve got aggro, they come at you at a frantic pace, hurt when they hit you, and can cause you to start bleeding out, or even break your bones. Thankfully, you can outrun zombies if you’re standing up and running — you can lose the zombies if you break line-of-sight and they don’t see (or hear) you again, but you can usually expect your running to attract even more zombies, especially if you’re running through a town. The line-of-sight thing is pretty interesting, and makes zombies fairly easy to evade if you’re running through a town — harder to lose if you’re out in an open field, but still possible. The line-of-sight is an interesting game mechanic anyway, and means even that newer players have a chance to survive (or they’ll learn stealth, which will help them out in the long run).

Health in DayZ matters. You have a blood meter, and if you’ve been in battle and taken a hit, sometimes you’ll start shaking from the pain, making accurate gunfire impossible. Thankfully, you can take painkillers to numb the pain. If a zombie breaks your bones, or if someone opens a door on you and you break a bone (it’s still an alpha, remember), you can fix yourself up with morphine. If you start bleeding out, you can bandage yourself up.

Yes, there’s quite a lot to DayZ — and we haven’t even discussed looting, vehicles, other players, playing in a group, or even death. But the reason DayZ works so damned well — even in its current alpha state — is that it’s just fun to play.

Diablo III isn’t quite the opposite in that it’s still fun to play, but it’s just not as compelling when compared to DayZ or even its predecessor, Diablo II. Diablo II was much, much darker than its successor, and Diablo III just feels as though it’s been given an overhaul for the worse. I know they’re essentially the same game, but it doesn’t feel as foreboding. It tries to be, what with the grotesque models and overall evil themes, but it just falls short of the level set by Diablo 2, and I’m not entirely sure why.

Don’t get me wrong, for the most part the graphical upgrades are more than welcomed (gaming at 800×600 isn’t my idea of fun these days), but instead of using those fancy new animations and graphics to make a better, gritter game, all Blizzard have done is put a few new colours in here and there, made gameplay simpler along the way, instead of making it darker, like a true sequel to Diablo II should be. I enjoyed Diablo II because it was exactly the kind of game I wanted to play — a dark and gritty game, filled with unknown terrors and semi-RPG elements.

Now, Diablo III feels like it just doesn’t have that special spark, and all because they’ve added a few new colours into the palette. The core gameplay hasn’t been changed all that much — Diablo III is still a dungeon crawler at heart — but it has been made to seem more attractive to newer players. The typeface is different, more inviting, which contributes a lot to the overall look and feel of the game. It’s a beautiful game, but there’s no compelling reason to play it besides the continuation of the storyline, and I’m honestly not sure if I would have played it at all if I wasn’t such a huge fan of the second Diablo game. For those that actually want a “nicer” dungeon-crawling game with a more upbeat tempo, there’s always Torchlight. Diablo was supposed to be the go-to game for dark and gritty, and the third one in the series just doesn’t deliver.

Which is a real shame.

DayZ is different in every way. Because it’s based on a military sim, it’s so much more different than your typical zombie apocalypse shooter. There’s not much actual gameplay, to be sure, but that’s half the fun: when you’re given no strict instructions and no real goal apart from just survival, you make do with what you have. At first, you’ll loot cities for all the beans you can get your hands on. You find a weapon to defend youself with. You kill any zombies that cross your path.  You make your own decisions when it comes to killing other players, or letting them live. You team up with other players with the goal of survival, and maybe you’ll abandon them to save yourself from the horde of zombies, maybe you won’t.

But that’s just where the fun begins. 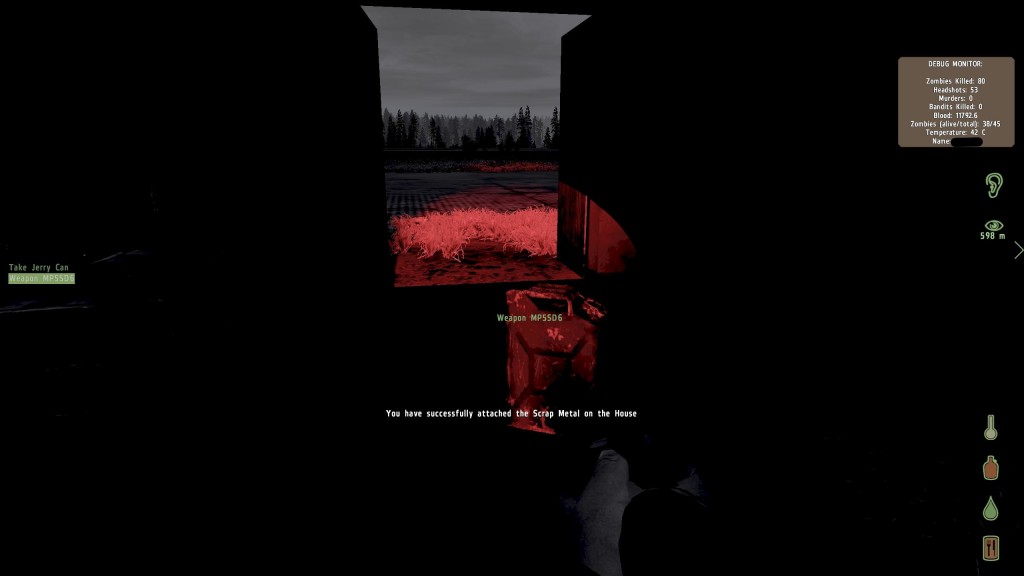 Sometimes you're killing zombies, or repairing cars — other times, you're attaching scrap metal to houses.