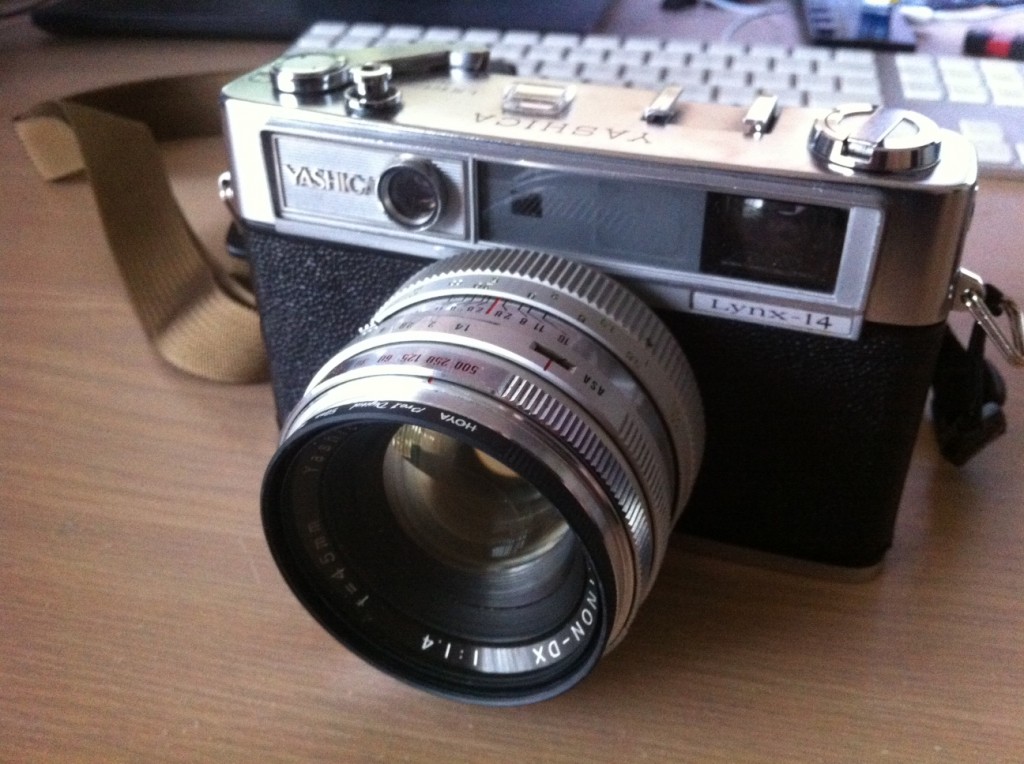 For about a fortnight now I’ve been experimenting with film photography. Truth be told, I don’t even think I’ve touched my DSLR in that time, and here’s why: film is not dead.

Far from it, in fact.

Our story today starts with an old 35mm rangefinder I bought off a guy recently. It’s a Yashica Lynx 14 from 1965, one that comes with a super-quiet leaf shutter and a huge, 45mm f/1.4 lens that completely dominates the camera. 58mm filters are gargantuan compared to normal rangefinder lenses, and big even compared to some of my DSLR lenses. There’s also a self-timer that runs for “approximately 8 seconds”, in case you were thinking of taking selfies without a mirror or something.

Not that you would want to, of course due to how incredibly awkward it would be at first: it’s manual everything: manual focus and manual exposure, featuring manual shutter speed and manual (stepless!1) aperture. The built-in light meter didn’t work when I received it, but I imported a few Wein cells which fixed fixed that up (mercury batteries are a little hard to come by these days, so mercury replacement batteries are the next best thing). Other than that, one of the greatest things about this camera and so many others like it is that it’s completely mechanical: the only reason you need batteries at all is for the light meter, which isn’t that big of a deal as you can always guess exposures or use a stand-alone light meter (or your iPhone, or your DSLR). The ability to take photos without batteries, is a pretty big deal. 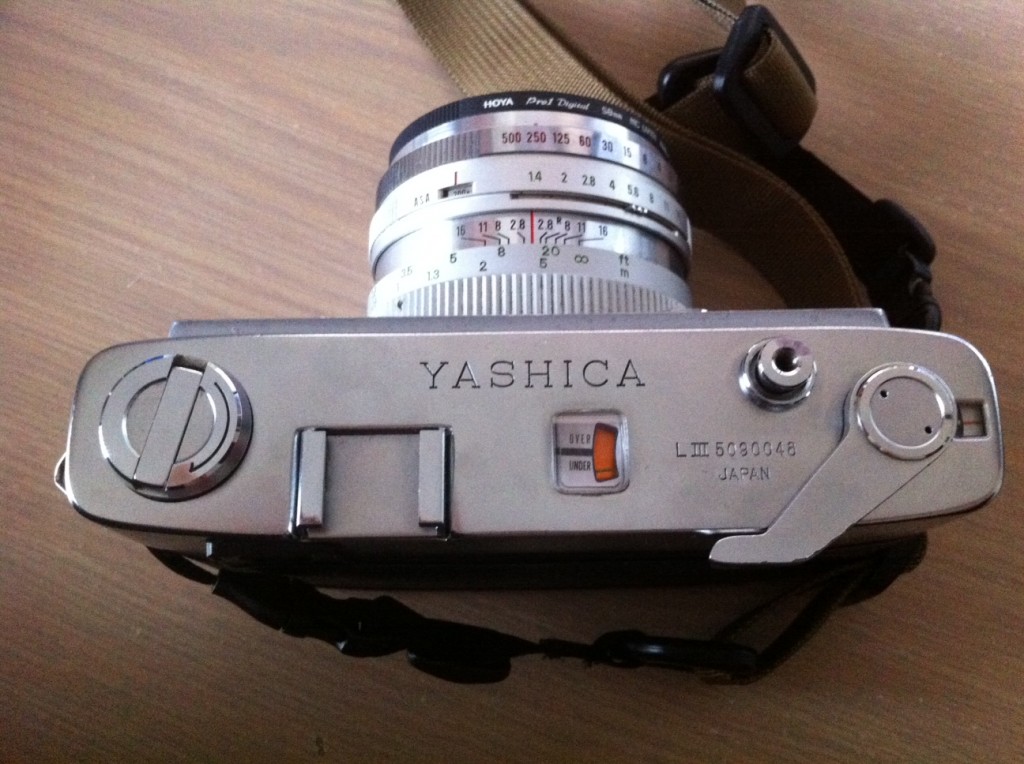 Why a film rangefinder, I hear you ask? I guess between a film rangefinder and a film SLR, the decision was pretty simple. They’re both about the same in terms of availability, and more or less around the same price range. Buying something like an EOS-type SLR body wouldn’t have been all that different to my current digital SLR. A later-generation EOS film body might have allowed me to use my current glass, but I wanted to shoot film mostly because it was different to digital. That meant I needed something much more different than my current DSLR, and for that, I needed a rangefinder. If I’m being honest, I just wanted a smaller, more discreet camera for street, a topic for another time.

Taking photos with a rangefinder is different to what you’re probably used to, as well as being much the same. One of the main differences is how you focus: there’s a small patch in the viewfinder that you place over your subject, at which point you focus your lens using the “overlapping” image that appears. When the two images overlap perfectly and are superimposed over one another, then you’re in focus. It’s really quite cool, and makes for a unique way of focusing. There are downsides to this method though, the main one being that it doesn’t work well with low-contrast images/subjects. For the most part, it’s perfectly okay.

For two weeks, I used my Yashica rangefinder almost exclusively, and how I shot  during the first week was by metering shots using my iPhone or on occasion, my DSLR, translating the same aperture and shutter speed to my Lynx, framing, and taking the shot. The batteries for the built in light meter didn’t arrive until the second week, so for the first week I’d meter my shot, use the same shutter/aperture on my Lynx for that speed film I was using, and take the shot. Sometimes metering the shot was too time-consuming and pretty unwieldy having to get out my iPhone/DSLR and consult its superior metering (actually, now that I think about it I’m going to have to go with it was unwieldy most of the time), so for the first two weeks I guessed a fair few exposures based on the light conditions of the previous shots.

I more or less started and finished the first two rolls of film in an afternoon in the first week, all without an in-body light meter. I decided to get them developed as prints-only, as they were mostly just “test shots” to see how things would turn out if I was guessing exposures (not to mention one of my first real experiences with manual focus). 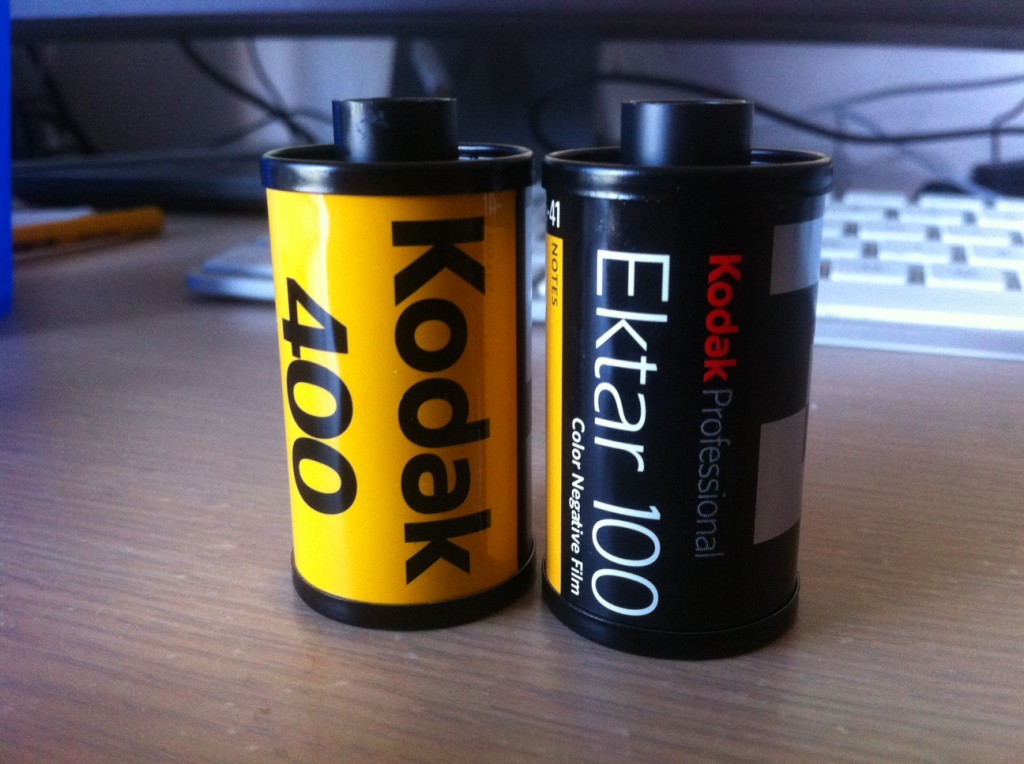 These first two rolls turned out okay, surprisingly. I was guessing exposures for much of it, and only one or two were grossly over- or under-exposed. Most could have done with an extra stop (or minus) here and there, but mostly they were pretty good. Focus didn’t seem to be an issue either, but I think that could mostly have been attributed to the higher apertures I was shooting at, upwards of f/8 or so.

After the success of my first two rolls, I was excited to do another two, centered around what I would normally be shooting (i.e. candids of people on the street).I got them back last week, and imagine my disappointment when they turned out worse than the previous two rolls. Quite a few shots were out of focus and exposures were all over the place. Suffice to say, my manual focus skills could definitely be improved — but I was kinda expecting that with film that was two stops more sensitive (and thus needing slower shutter speeds/a wider aperture for the same light).

Taking photos with a rangefinder is incredibly good fun. If you’ve never experienced shooting with a film rangefinder, you’re missing out one of the best shooting experiences you can have. Part of it has to do with the fact that you’re doing exposures manually according to what your iPhone light meter says, or trying to do the whole “match needle” thing for every new lighting situation. The other part of it is the entire feeling of film photography: without getting too hand-wavey, depressing the shutter then manually advancing the film using the film advance lever every time you take a shot is something special, as is rewinding the film back into the cassette when you’re done with that roll.

The truth is, I’ve been wanting to try film for a while. Ever since getting a digital camera I’ve wanted to give film a go: not because there are any inherent advantages in film vs digital, but because it’s just something different. Plus, the barrier to entry is relatively low, with a few exceptions (ongoing cost of film and developing). Film has always held this kind of special aura for me, and that might have been to do with the fact that most of my childhood pictures are from an electric film camera (auto-advance and rewind, wow!) that’s still floating around, incidentally.

And you know what? I think I like it. I like it a lot, in fact. I don’t think I’m quite ready to ditch my digital kit entirely as that still has advantages of its own (on-demand, selectable ISO up to 12,800 without having to change film is more of a plus than you would think), but I’m warming up to the idea of shooting predominantly film. There’s something appealing about film photography that can’t be quantified in words, something that can’t be explained except in pictures. It’s just good fun. I’m not saying digital is cheap or anything, but shooting film gives you a whole different appreciation for photography, even more so if you’ve only shot digital thus far, and even more so again if you have an all-manual camera and you’re doing exposures manually.

Now, if only I had a better film camera…