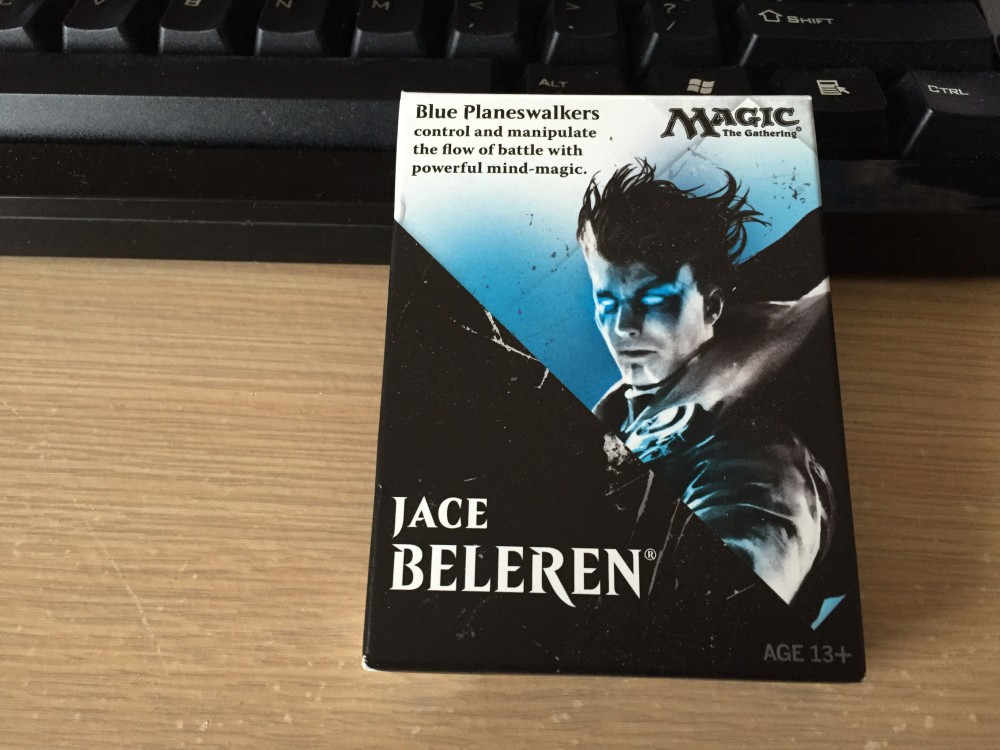 When we last left our intrepid explorer on his quest for the glorious Sarkhan pin at PAX Aus 2014, he had just gotten his card stamped after taking a really weird picture of himself as part of the three tasks he had to accomplish before gaining the pin and taking over the world. Wait, maybe not that last part. One down, two to go.

After getting my picture taken and getting one of the three stamps needed for the Sarkhan pin at PAX Aus 2014, there were just two other events I needed to complete. Spell-slinging, duelling, or learning to play Magic were the options available to me, although there was one more I can’t remember for the life of me. In any case, I had no idea what spell-slinging or duelling was, and I was pretty sure I wanted to learn how to play Magic, so the choice was between spell-slinging or duelling.

With the primary goal being acquiring the Sarkhan pin in the least amount of time, the “learning to play Magic” line was a little too long for my experienced line-gauging eye. I did notice a collection of iPads setup in the Magic area, and after confirming with a passing attendant about how they were being used for the “duelling” part of the Magic exhibition, I joined the queue (which was, thankfully, much shorter than the learning to play line).

Just so we’re absolutely clear: I already knew how to play Magic. The Pokémon Trading Card Game might have been all the rage when I was in primary school, but in high school, Pokémon had all but died out, and Magic was the flavour of the month. I was intrigued by the card game the older kids were playing in the library every lunchtime, and before I knew it, had two Magic decks of my own and was spending the inevitably-too-short lunchtimes playing with and against some of the older kids.

But all that was many moons ago, and like Pokémon, I fell out of the Magic scene after a few years. I stepped up to one of the iPads set aside for duelling, and when presented with the screen asking whether I had played Magic before, I selected yes. At that point I fully expected get my arse handed to me from a computer, what with its perfect decision making and innate knowledge of the game. Luckily, I had overheard a Magic staffer saying you’d get a stamp on your card whether you won or lost the duel, so my fears about losing and having to do it all again were assuaged. With my newfound brevity, I started playing Magic on the iPad, an experience that was entirely new to me.

At first, I was losing. Pretty badly — the hand I drew had nothing usable, and I was still putting out lands when my AI opponent started doing damage. Nothing serious, just a few chips here and there, but enough to put me on the back foot. Combined with the trepidation and unfamiliarity with Magic on an iPad, I wasn’t really sure I would be able to win.

The Magic iPad experience itself was pretty standard — like any game, Magic follows a set of rules which can be codified and turned into a series of steps, much like an elaborate dance. Only in this case, my AI opponent held the entire ballroom captivated with his delicate footwork, and I was just doing the ol’ two-step in the corner.

Eventually things started turning in my favour and after a while, I had the upper hand. A few more turns later, and I had won the duel, defeating the boss. I resisted the temptation to do a small victory dance and instead settled for calling over one of the Magic staffers over, showing him my win. He grinned and congratulated me on a job well done, and rewarded me with a hole punched in my card, over the section that said “duelling”. Two down, one to go.

I began making my way over to the learning to play Magic area, and on the way, reflected on my Magic experience. Even though I’ve never really picked up Magic since high school, I have played the occasional game. My most recent game was at the inaugural PAX, where I played with James and a friend of his from Brisbane, while we were lining up for a panel in the queue room. James had just showed me the latest Plants versus Zombies game on his iPad, commenting how he found the unlocking mechanism strange, and soon after, we broke out the Magic decks in order to stave off boredom. The most recent game before that, I think, was with cousins in Malaysia a few years prior. We had run out of things to do, and started a game that we never finished. I still see those cousins occasionally, only we don’t play Magic anymore — these days, it’s mostly mahjong when we’re together, and Dota when we’re not.

Arriving at the learning to play Magic area, and I first noticed how packed it was. There were people everywhere, sitting at black tables with cards laid out in front of them. As I was being led towards the person who would teach me the game (or so he thought), I wondered if I was even welcome, being the Magic veteran I am. That all evaporated as he introduced himself with a smile — I don’t remember his name, but I remember him being totally OK with the fact I was familiar with the game but hadn’t played in a while. “Just let me know if there’s anything you’re unsure about or need clarification on”, he said (or words to that effect), and I replied “sure, let’s do this”.

I fumbled through choosing a deck to play with. I shuffled my cards in the most awkward possible way. I clumsily drew cards, unsure if I was “doing it right” — on the iPad, the computer had done all the work for me. Doing things on my own was new and foreign, and I’m sure that’s the kind of feeling I gave off. But my Magic mentor was forgiving — encouraging me when I seemed unsure, and providing instruction when I was confused about what to do next.

After the initial awkwardness of setting up the cards and drawing a hand, I got into the rhythm of the game. I placed lands from my hand onto the battlefield, tapping them whenever I played creatures or instants. I stumbled when discarding a card, but once again, my mentor was there to guide me. I started to get anxious when he had played a few fearsome cards when I had nothing but islands — an enchantment that gave +3/+3 to one of his creatures, another that gave instantly gave him +1 life, but I was determined. I hung on grimly, playing the long game.

He ended up drawing first blood, I think. But after asking clarification on playing an Artifact card — Staff of the Mind Magus, which gave me +1 life whenever a blue spell or Island entered the battlefield — I began to make my comeback. That, combined with a string of un-blockable flying-type creatures, ensured my swift victory, and that’s when things got really awkward. I’m not sure if he was just going easy on me, or if he didn’t think I knew what I was doing, but winning the match and doing so convincingly made things weird.

As we were packing up the cards, I sheepishly asked him if he’d had many people who knew what they were doing. He said a few, but most people were new to the game. That was about all the awkward small talk I could manage, so I thanked him for his time, pocketed my Blue Planeswalkers starter deck, and went to claim my prize: a stamp on my Magic flyer, and with it, the coveted Sarkham pin.

I think, if there’s anything to take home about PAX, it’s that it’s all about the experiences you have during the show. Whether you’re watching professional CS:GO players go up against a bunch of amateurs, StreetPassing with every opportunity, or just chilling in the console and PC freeplay areas, you get to experience a whole bunch of stuff with people who are just as into games as you are.

Or in the case of those guys who decided to cosplay as Misty, perhaps even more so.