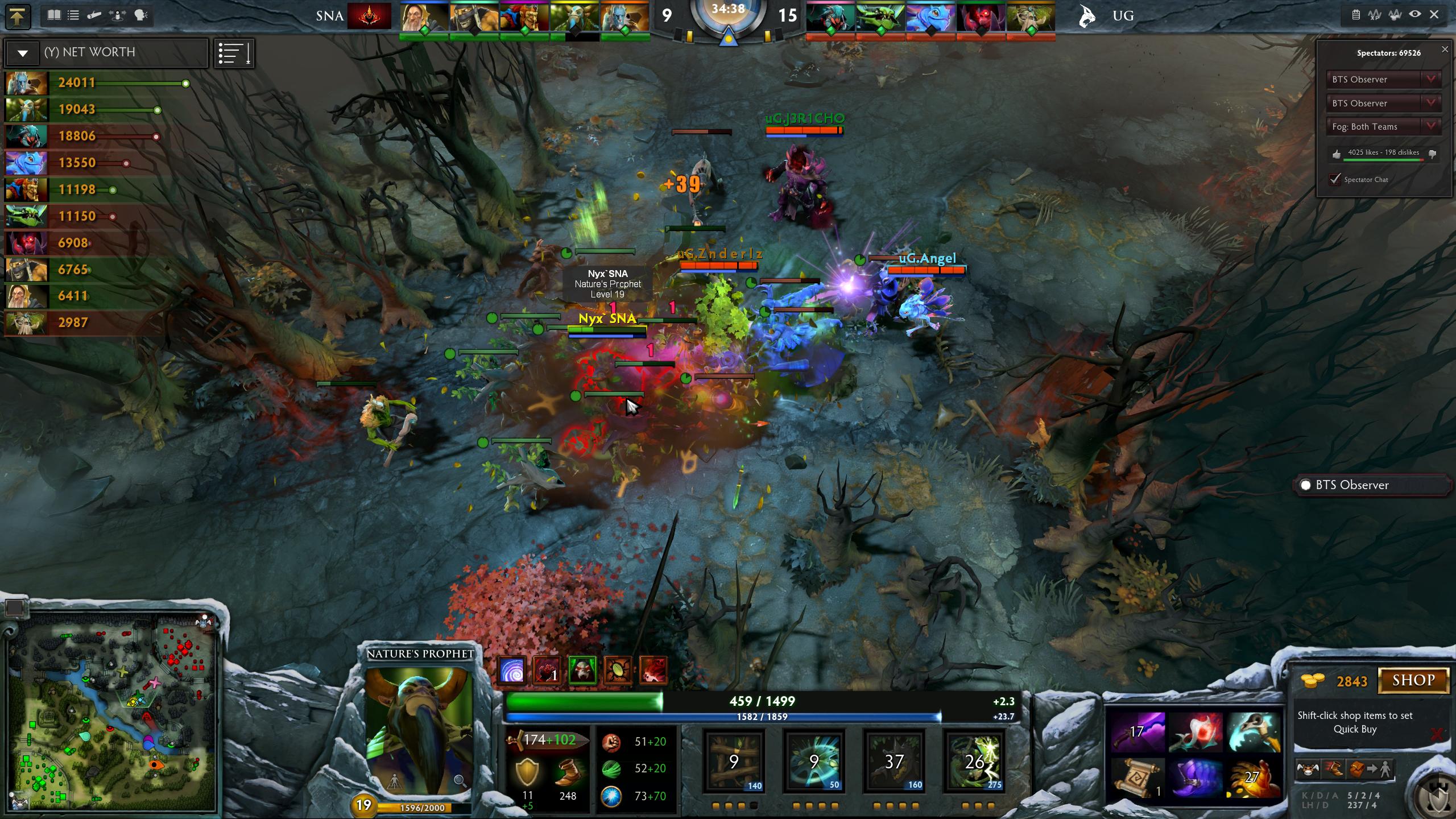 I’ve never really been into actual sport, least of all the AFL or NHL or whatever three-letter acronym people watch on TV these days. Incredibly un-Australian of me, I know, but the appeal just hasn’t been there. There are two exceptions to this rule, the first being international soccer and infrequently, cricket, both domestic and international — but for the most part, I just don’t watch sport, at least not in the traditional sense.

But ever since I can remember, I’ve liked watching people other play video games. Even if I wasn’t playing myself, I liked watching to see how they approached the same problem I came across earlier, or seeing how much faster they progressed through the game than I did. From other people’s battle strategies in Pokémon to seeing what kind of mischief they could get up to in the earlier Grand Theft Autos, I’ve always enjoyed watching other people play games.

Which is weird, because I didn’t think I’d be that into watching other people play Dota 2. I like playing the game, for sure, but I didn’t think watching games would be that great; somehow boring, having to watch people last hit, gank, and move around the map. 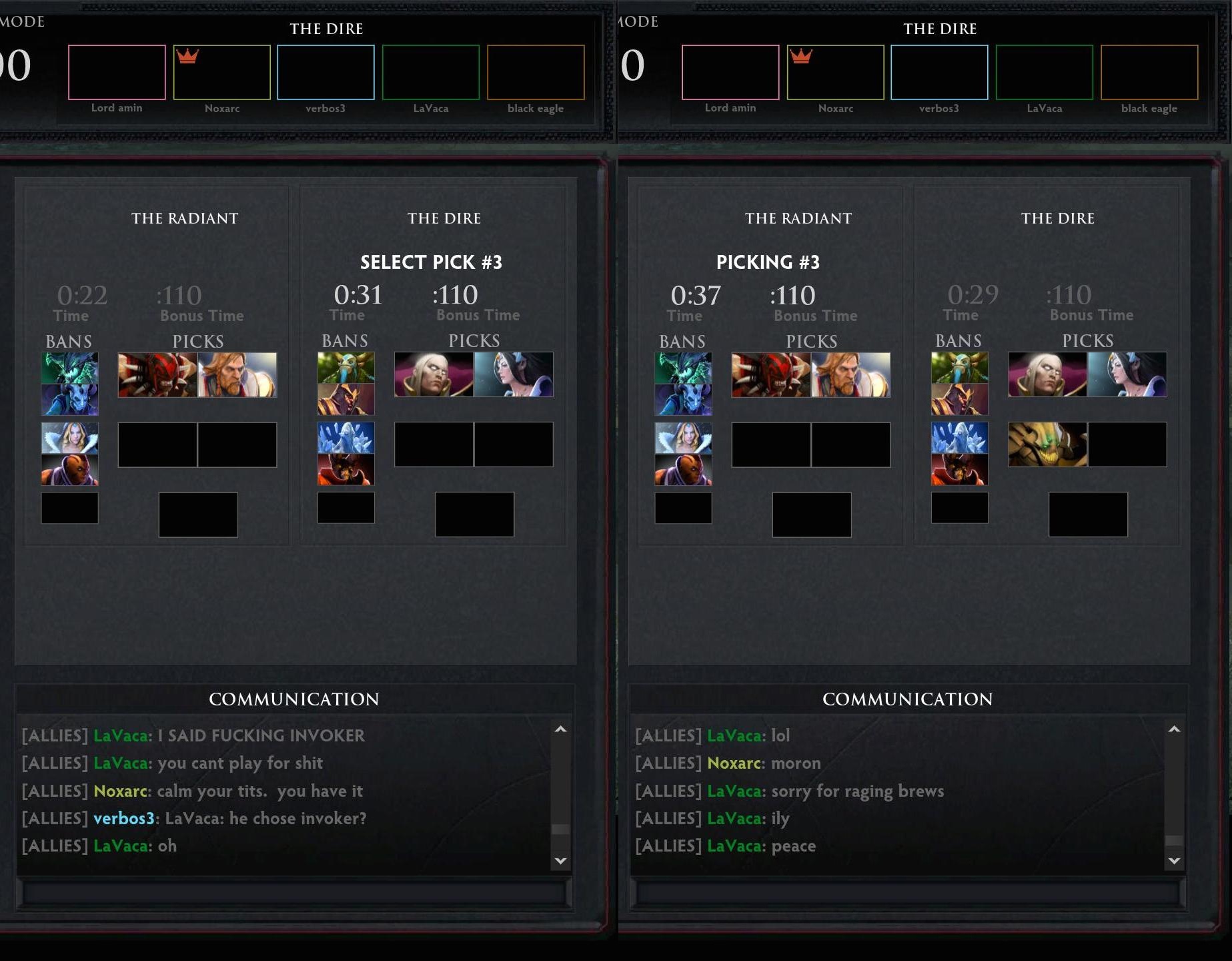 In this thread: someone gets mad before he realises that he’s looking at the other team’s picks in Captain’s Mode. We ended up losing that match, but in another CM game I wanted the Mirana, another guy stole it and I ended up with Tiny. I’ve only played him a handful of times, but I bought a Midas and went to town.

The International 2014 is coming up, and after spectating umpteen games from the qualifiers, I can safely say it’s far more enjoyable than I ever predicted. I didn’t think I’d be into it because of the reasons listed above, because I thought it would be boring, but the combination of broadcasters and professional, high-level Dota 2 play, turns something I thought would have been boring into something interesting.

The broadcasters add a lot to the overall experience, to be honest. Having former pro-players cast the pro-level games gives real insight into all aspects of the game, from the picks and bans in Captains Mode to the various strategies employed during ganks, roshan kills, or what the teams need to do to win the game at any given point. I guess they’re kind of similar to normal commentators in that regard, in that they’re always adding commentary into the mix so that watching fantasy avatars kill each other doesn’t ever become boring.

The best casters don’t have to be funny, but they do have to know the game, and, perhaps more importantly, their audience. Watching Beyond the Summit is fine if you’re comfortable with the meta (or just like EG.Fear’s insights into pro-level play), but watching someone like joinDOTA cast a game is great if you’re looking to pick up a few tips. There was a recent game I watched where the joinDOTA casters were discussing the difference between blink and semi-blink, and the difference between them in terms of disjointing targeted spells, and that was useful stuff for someone who doesn’t play a lot of Anti-mage or Queen of Pain. 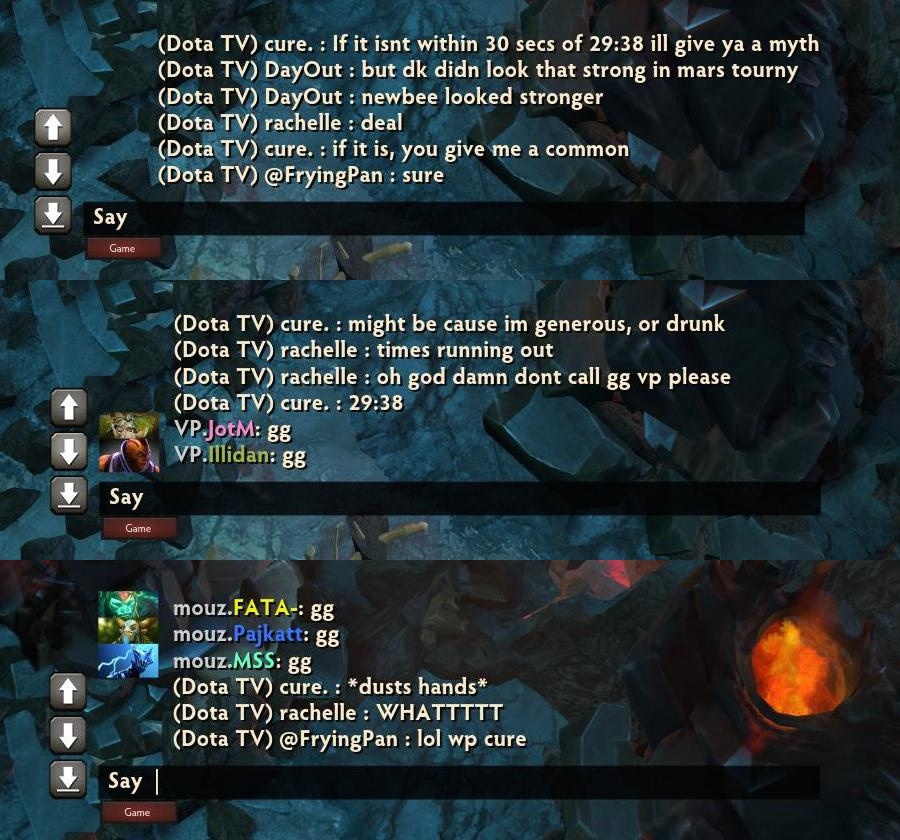 In this thread: dude picks the exact time, down to the second, when the Mouz vs VP match ends. Full size here: 1, 2, 3

The other thing I like watching about higher-level Dota is the sheer skill of the players. Some of it’s because they’ve got great coordination and teamwork — rarely seen in the pub matches I play in — but seeing someone get disrupted into a Mirana arrow stun or someone get avalanched, tossed, only to then land in the avalanche again is impressive every time I see it. Granted, some of that comes with playing the game a tonne, but being able to do it consistently never ceases to amaze. In terms of my own improvement in the game, watching games has let me pick up a wealth of knowledge I (probably) wouldn’t have gotten just by playing. The International Qualifiers have inspired me to play better, and I’m sure I’m not the only one.

It’s kind of funny — when I first started out with Dota 2 I wasn’t sure what Valve were going for. I didn’t really understand why the game had such a large focus on spectating games as much as it did actually playing them — but now I know. The prize pool for The International 2014 is something insane like $6.75 million so far — which is only 25% of all Compendium and in-game purchases since the beginning of this month. Valve were making so much money they even had to put some updated stretch goals.

I didn’t really think I’d be into watching long-ish games of Dota 2, but when it’s casted by current and former pros, those that know the game inside out, and when I’m seeing some impressive carries, it kind of becomes exciting. Perhaps this is what being a sportsfan is all about, but then again, I wouldn’t know 🙂