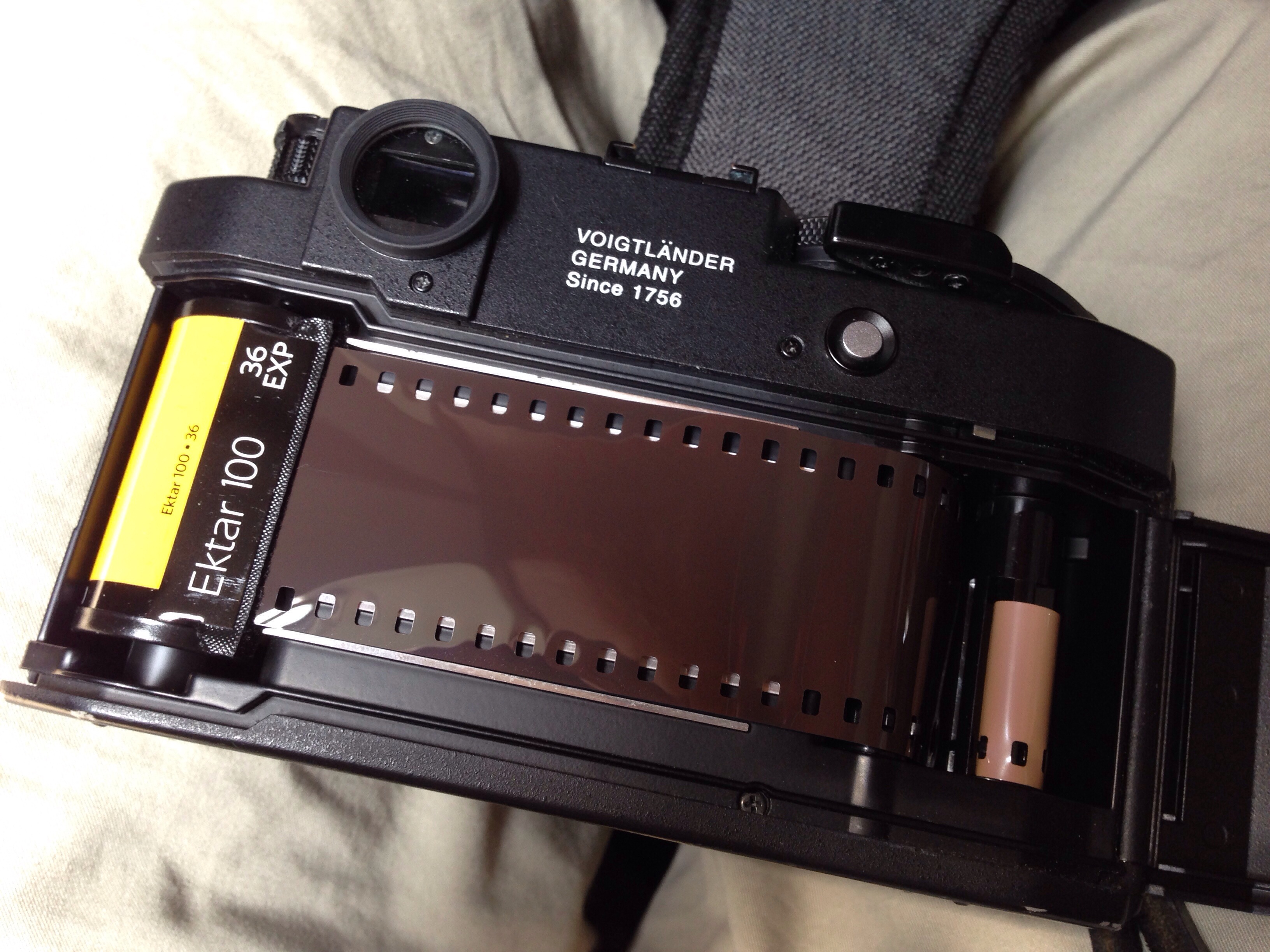 I brought two cameras with me to Malaysia this trip. One is my recently-acquired Sony RX100 II, the other is my slightly older Bessa R2A film rangefinder. But for some reason, most of the time I’ve found myself taking the Bessa with me everywhere, and leaving the very capable RX100 at home.

It’s not like I hate digital photography, as I’ve said many times before. As any film photographer who’s ever been caught out with the wrong kind of film loaded in his camera will tell you, there are many benefits to user-selectable ISO, autofocus, and even being able to instantly see and review your picture immediately after you’ve taken it, all features you can find on even the simplest of digital cameras. Instead, the reason why I choose to use a film rangefinder over an advanced digital camera is a little less clear cut than just “because I’m an analog camera hipster” or “for the sake of it”.

While it’s true that the Bessa produces equal or better photos (on occasion) than the Sony, or that film has a certain unique quality about it that can’t be replicated by the super-clean files of digital, unless work happens in post (processing). Those are both true, and both are compelling reasons to shoot film over digital, but neither of them are the reason I choose to take photos with the Bessa when I can.

I was reading Craig Mod’s piece in The New Yorker, entitled Goodbye, Cameras. There, he us about how the iPhone is a compelling choice for many photographers, not only because it produces images that more or less equal many of today’s point and shoots, but also because it’s a powerful networked camera that lets us instantly share the images we’ve taken, along with whatever context we want (a witty tweet, a geotag, a — shudder — hashtag on Instagram):

Yet if the advent of digital photography compressed the core processes of the medium, smartphones further squish the full spectrum of photographic storytelling: capture, edit, collate, share, and respond. I saw more and shot more, and returned from the forest with a record of both the small details—light and texture and snippets of life—and the conversations that floated around them on my social networks.

He makes a good point. There’s something intrinsically advantageous about the notion of a networked lens, one that is capable of capturing not only a beautiful landscape or social situation, but also recording the thoughts and memories to go along with it. Not only that, but then being able to instantly share that with anyone in the world makes for a pretty desirable device, wouldn’t you say?

But as great as all that is, what use is a networked lens like the iPhone if there is no network? During my trip to Malaysia I didn’t have internet access for the majority of the time (by choice, not because it was physically not available), and I still took photos with my iPhone. I just wasn’t able to instantly share them with friends on various social networks. Why, then, would I choose to take most of the pictures I did with a film camera, instead of a very capable, much more advanced, digital one like the Sony?

The answer is twofold: one, I’m a dirty analog camera hipster, and two, I enjoy the experience of film photography, especially with a film rangefinder, more.

The first needs no explanation. If money was no object, you can bet I would be out there with a medium format Hasselblad or a Polaroid land camera, snapping away. The only reason I’m not currently is because I’m a poor, somewhat-unemployed individual, not because I lack the desire or the time to do so. I still probably wouldn’t develop my own film, as that’s another can of worms I’m not quite willing to open just yet, but would I be doing everything physically possible to take my street photography to the next level and walk the streets with a great big hulking Hasselblad, if given the opportunity? Abso-frickin’-lutely.

The second is a matter of personal preference. Because digital is cheap and digital cameras these days are so good, it doesn’t take much to capture a good photo with a digital camera. Film, on the other hand, requires a little more finesse. You could get a film camera that takes all the hard work out of the equation (I actually own one), but where’s the fun in that?

Fun is a big part of the film photo-capturing experience, if you’re doing it often. In my opinion, there’s very little joy to be had in looking at some pixels on a screen, deciding they make a good photo, and hitting the shutter button. Looking through the viewfinder of any half-decent film rangefinder, on the other hand, can be an almost otherworldly experience. You’re not just making sure the shot you want is within the frame lines and focusing the lens by matching the two images to each other, you’re putting in actual effort to make sure your image comes out exactly the way you saw it through the viewfinder.

Before you’ve even considered touching the shutter button, all you’ve done is ensure good composition. Only then can you find the right exposure settings for your particular shot, although your camera can help you out here if it has aperture or shutter priority. And after the exposure is locked in, you gently depress the shutter button, the shutter fires — clack — and then you can wind-on the next shot.

I probably make it seem like a slower process than it probably is, but that’s part of the experience, too. Film photography is a slow process. There’s no need to rush film photography, because you only get 37 chances every roll to get it just right; it’s not like digital where you can instantly review, delete, and re-take the shot if necessary. There’s none of this “take selfie, upload to Facebook/Instagram” business all the young people seem to be obsessed with these days.

At the end of the day, I wouldn’t go so far as to say film photography could replace digital entirely for me. My photographic interests are far too varied for that to even be a remote possibility, and besides, I know there’s advantages to digital that you just can’t get with film, no matter how hard you try or how much you spend. But at the same time, it’s about using the right tool for the right job.

I try not to get involved in the whole PC vs Mac argument. It’s been done hundreds of times before, and I honestly have nothing to say that would add value to the conversation. I have a Mac because I prefer it for day-to-day web browsing and general productivity, and my PC excels at the tasks my Mac can’t handle as well; gaming, mostly, but also for running esoteric Windows-only software. It’s all about using the right roll for the right job.

I’ve been playing Dota recently, and that’s been pretty great. But if I’m away from my PC for a few days (or weeks, in the case of overseas holidays), there’s just no way I can play. But wait, I hear you say, Dota is available on Steam for OS X! And indeed it is, but have you ever tried playing it under OpenGL? Performance is below where your or I may expect it to be. With every possible setting turned down I still get a hellishly unstable frame rate on my not-shabby model MacBook Pro — it’s not unplayable by any means, but it’s not exactly a great experience, either.

How does this fit into my “right tool for the right job” philosophy? Well, my PC does a much better job at gaming than my Mac ever could. And on the other hand, my Mac does a better job than my PC does for day-to-day stuff. It’s the same with the two cameras I brought with me to Malaysia: the Sony might have all the advantages of digital and be much more compact than my film camera, but I just prefer taking photos with my rangefinder.

Sometimes, that’s just what it’s all about.

Disclaimer: this entry was posted from the road during Malaysia 2014. Whilst all care has been taken to ensure this post is free from the usual linkbait-y list-o-ramas you may find on other, less reputable, websites, the author cannot be held responsible for any factual errors within, but can offer his sincerest apologies should you find any erroneous characters or punctuation, like so: +|>]^|£\¥| . The lack of images and links is somewhat intentional, owning to the fact this was written and posted entirely from an iPhone on the dodgiest of Wi-Fi networks. Seriously, I feel like I have to check my phone for sexually-transmitted infections now. There will probably be a post with a bunch of pictures from my trip once I get back to my wonderfully low-latency, high-bandwidth NBN connection at home, which I am missing a lot right now