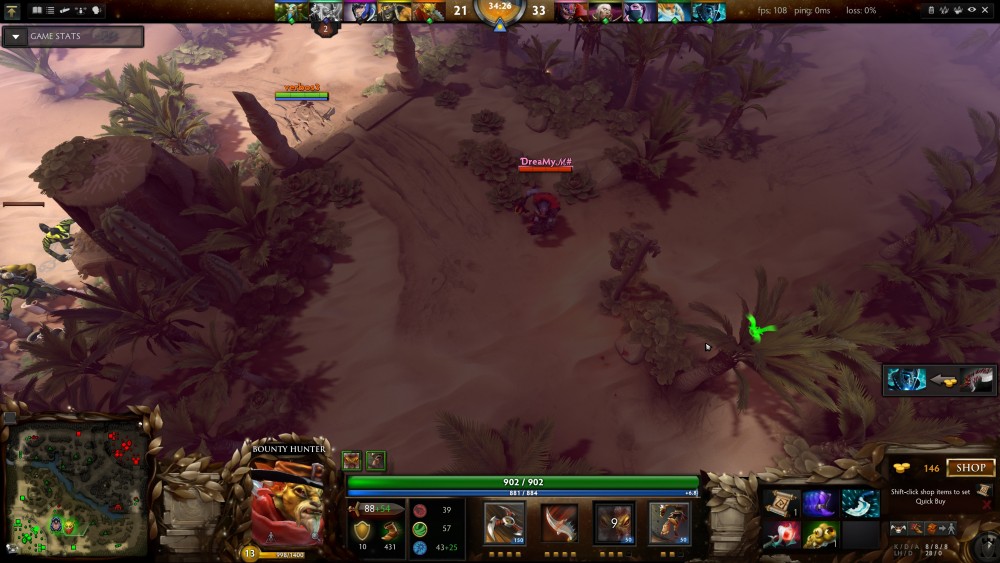 I can unequivocally say that this was not the play required. Even though I had uphill vision of the Lion, there was an Invoker there which did his usual combo and destroyed me, and my team that followed me in.

Every now and again, when I find myself with more losses than wins in my latest matches list on Dotabuff, I’ll ask myself what I’m doing wrong. Or doing differently, as the case may be. And every now and again, usually during a particularly depressing six or seven game losing streak, I’ll contemplate giving up Dota altogether.

Seeing as we both know that isn’t an option, I’ve determined that the only way to get better at Dota is not only to play games, but also to lose them, learn what I’m doing wrong, and then improve. Sounds crazy, I know. Sometimes, part of the learning process involves looking back at replays to see what happened in a game that led to a loss, or recording a snippet of Shadowplay footage to celebrate a bad engagement turned into an eventual win.

Recently, I’ve been asking myself what I’ve been doing differently that leads to losses. And this time, I came to the conclusion that I’ve watched too much pro-level Dota, to the point where it’s influenced my own play that I no longer go for the safe kills, but go for the low-percentage, only-possible-with-perfect-execution plays that don’t work out because I only have mediocre skill.

Don’t get me wrong, watching pro-Dota is a great learning experience when you’re starting out, especially if you have no idea what’s going on and what you’re supposed to be doing during the game. But as much as you can learn from the pros, you also have to recognise, that pro-level Dota is an entirely different world from the trench.

When all your games are classed as “Normal skill”, stuff that happens in pro-level Dota are the hopes and dreams of us mere mortals. Besides most people having a tiny hero pool, we farm slower, last-hit less efficiently, frequently miss combos, take bad engagements, and perhaps the most heinous of all, are incredibly inconsistent at all of the above, which means that even without the variety of heroes and item combinations, game-to-game we can play entirely differently, as evidenced by these two recent Bounty Hunter games (the Witch Doctor was the same in both games).

So instead of trying to make “the big play”, the idea is that I play it safe, taking less risks and carefully calculating about what I’m doing. Less flashy plays, more good clean dota.

Which is all harder than it sounds, because everyone likes being the flashy player, the one that dodges skillshots with a well-timed Euls, smokes at the last second to avoid a sniper ult, or uses Aphotic Shield to avoid most of the damage from some burst ability. Pulling off an X-mark into Sacred Arrow combo might look good, but if you can only do it once the entire game, what’s the point? Might as well try and get arrow without the X-mark.

Admittedly, plays are required some of the time in order to bring your team back into the game. But it’s better to take them early game, rather than throw the game later on, and if you can’t make the play, then it’s probably better to play to your strengths at that point in time – avoiding teamfights until your carries get more farmed, or baiting out skills/items in order to secure a favourable engagement later on.