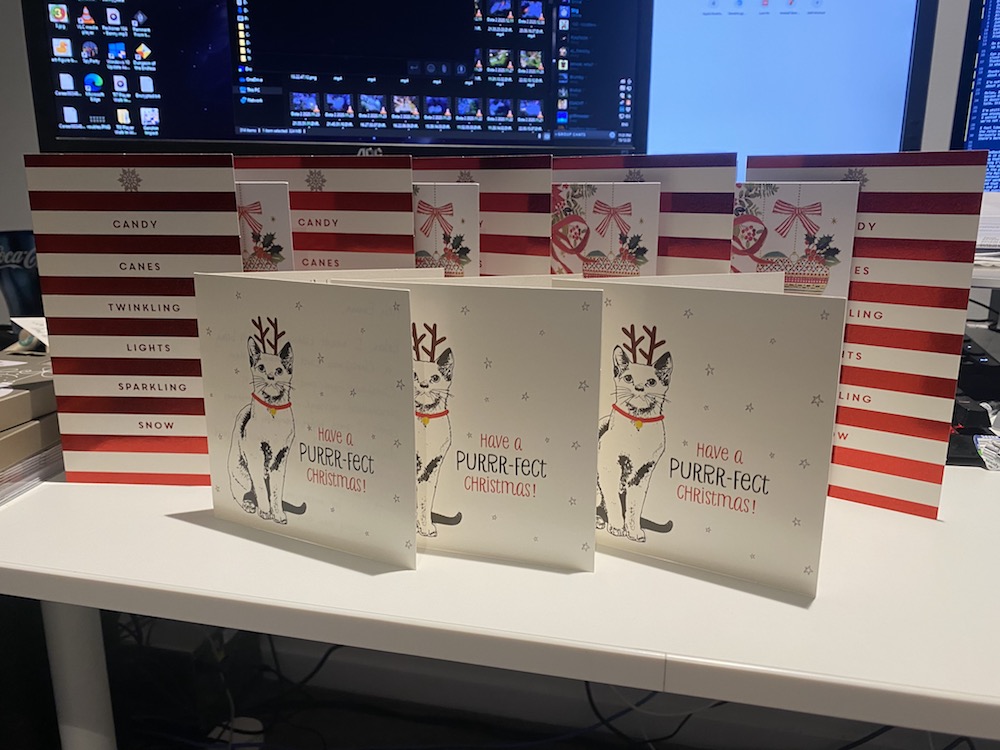 I did hand-written Christmas cards this year. It’s the first time I’ve really given out more than one card at a time, outside of birthdays or special events. I just think it’s a nice thing to do, after the year we’ve all had, and by writing supremely positive, personalised messages in each of the cards, it’ll be that little end-of-year pick-me-up to see all my favourite colleagues into the new year.

For the longest time now, I have had an unusual fascination with hand-writing things. While it’s usually faster and easier to use a keyboard to type something out, when it comes to giving things a personalised touch, it’s hard to go past something more personal than your own handwriting. What better way to convey your thoughts than pen to paper, written by your own hand, in a form that’s uniquely yours? Handwriting is that unique indicator that whatever words were written, they were something you personally produced, not something that was just printed out by a millions of tiny droplets or particles, a process that required very little effort on your part.

I’m not sure why I’m so attached to hand-writing things. I guess part of the reason is because in the modern world we live in, where everything can either be tapped out by two thumbs on glass, or on the loudest mechanical keyboard money can buy, writing something with pen on paper feels different somehow. Not necessarily any better or any worse, just different, somehow. Almost like you care about whoever you’re writing to and want to put in a little extra effort. I hesitate to ascribe some extra level of meaning to hand-writing that isn’t there, but ever since I stopped hand-writing things on a regular basis, going back to it feels… different. Special? Perhaps, depending on the message.

One of the interesting quirks of hand-writing is the whole permanence of it all. If you spell something wrong, or make an errant stroke with your pen, turning your previously borderline-legible scrawl into an art piece to rival even the most post-impressionist art pieces, that’s it! You can either chuck out the whole thing and start again, hoping you don’t make some other mistake, or you can decide whether you want to live with it and give someone something that’s less than perfect. But what if I’m not happy about how the words look on the page? What if my kerning is off, or the whole thing is slanted at some strange angle? It all comes as part of the territory when it comes to handwriting, and my choices are to either put up with it, or start again. Of course, no one expects perfection when it comes to hand writing, so minor imperfections are probably fine. After all, there’s only so many times I can decide to rewrite something before I start to run out of cards.

And yes, I’m fully aware that some colleagues will appreciate a Christmas card more than others. While it’s unusual — in 2020, at least, when everything is either digital, or stories, or even digital stories — to receive a hand-written Christmas card, I still think it’s something worth doing for the people at work that have made an impact on me this year. But for whatever reason, some people associate more value with a hand-written, personalised Christmas card than others. I’m not really sure why; perhaps they think Christmas cards are blasé, or that anyone can write some nice words in a card, wishing someone else a merry Christmas and a happy new year. Maybe they don’t think the card-writer means what they say — irrespective of how personal the message is — that the whole thing smells off, as if the card-writer is looking for a free win. Maybe they just don’t put as much stock in receiving cards as the next guy. But I like to think writing personalised, thoughtful messages for over a dozen individuals says plenty about the person writing the cards, even if some of the recipients aren’t as grateful as others.

Even if all of the recipients won’t see the Christmas card the same way, why does that matter? On some level I’m doing it as much for myself as I am for the Christmas card recipients. Writing personalised Christmas cards lets me say things directly to the recipients that I would otherwise find difficult to say in person. Not because I don’t necessarily think those things when I’m talking with them in person, but because I often feel awkward about expressing my feelings. Besides, I’ve always considered myself more eloquent in text, and sometimes even far more eloquent, depending on the friend and situation, so none of this is particularly new.

So I ended up doing over a dozen hand-written Christmas cards this year. It cost me a few hours, getting the messages and my hand-writing right, another few dollars, buying the cards. But being able to feel the gratitude of others? When all you really did was write something deep and meaningful on a Christmas card? That’s kinda nice, too.

Which, as I said in a few of the cards, nice is all something we could all use a little more of, given the year we’ve all had.