Okay, so there’s a lot more images in that folder than I expected. No worries, it just means more posts for you! Here’s another, entitled “Wait, I’ve seen that somewhere! (Part Two)”. 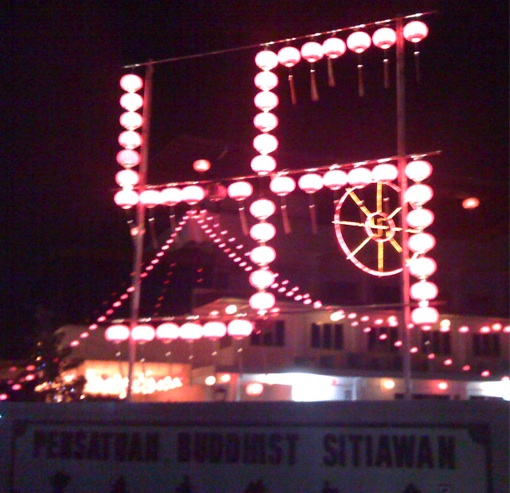 Right – so yet more late-night driving. I think this was after my Gramp’s 80th bday party, but in any case, we had seen this a couple of times before.

Armed with lots of photon-capturing devices (read: cameras, iPhone), we went back to take some good photos.

Now, the question remains: what is it? Sure, it’s a swastika, but it’s not for a Nazi party. Nope – if you read the text at the bottom of the image, it says something along the lines of “Buddhist Church of Sitiawan”.

The design of the swastika is actually pretty cool – it’s made out of lanterns which make for an ominous sight at night-time.

Pretty blatant of them to just stick it out there, though, considering how easily it could be mistaken for a Nazi symbol, and it’s not a small sign either, easily being taller than 2m in height, with a couple more for elevation.