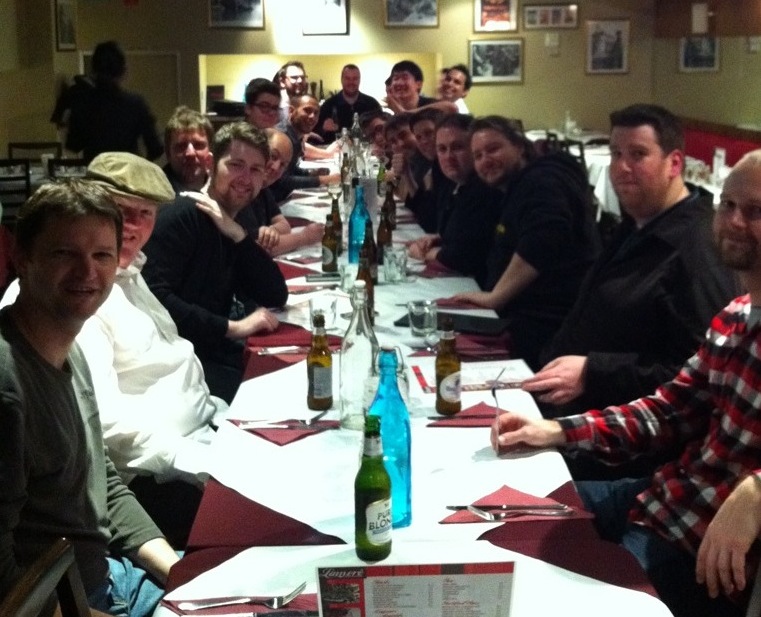 What’s the word for that moment when you realise that the work you do is appreciated by many, many people all across Australia?

This weekend was nothing short of amazing, all thanks to a little site called MacTalk.

Back in 2007, I joined a little site called MacTalk. Fast forward a couple of years, a few thousand posts, and many internet arguments later, and I come across a little post by then-overseer and hater of pants, decryption, asking for volunteer writers for some news posts. I put my hand up.

The rest is turtles all the way down.

This weekend was basically the culmination of all that; a dinner with most of the people who have contributed to MacTalk in some way, those who have silently decimated the not-so-silent spam, those who have kept things ticking over behind the scenes, and those who have written articles, reviewed products, or gotten on their perennial soapbox and given a few thousand listeners an earful about how non-developers shouldn’t be using beta releases on the podcast, past and present.

There were a few people missing, but by and large, most of the big players where there and a fantastic time was had by all. Putting faces to online personas is always good fun, even if it can be a little daunting at first. Once you get over that initial awkwardness of “hey, do I follow you on Twitter? What’s your name on the forums?”, then it’s apples, ladies and gentlemen, apples — which is lucky, because that’s pretty much what MacTalk is about (Apple, Inc).

At some point during the night, there was a thing where had to go around the table and tell everyone about ourselves — our Twitter or MacTalk usernames, what we did, and so on.

Some people were known simply by name or by reputation, others had to describe their role in MacTalk a little more. When it came around to me, I simply said “I’m Benny, and I write the news”.

This isn’t just me being naive, it’s a genuine realisation of the culmination of hours of early morning (and some not-so-early) news posts over last two years. It’s me realising that podcast topics which were formed off the words I had written, it’s about me realising that “whoa, people actually read this stuff — and they like it!” Me realising that the words I type into one of those new-fangled computers actually has some sort of impact.

One comment (from Chrome, I believe): “everyone sets their clock from Greenwich Mean Time, but Greenwich set their time from [me]”.

There’s nothing quite like the feeling of being appreciated and recognised for your work, which, I guess, was really the whole point of that night; everyone in that room had contributed in some way, shape, or form to MacTalk over the past few years.

This morning I considered writing a piece on Steve Jobs (you know, seeing as he stepped down as CEO) as a sort of editorial on MacTalk (like all the cool kids are doing), but as I thought about what I would write about, I couldn’t think of anything. Seriously, not a thing — not because there wasn’t anything to say, but because anything I wrote about would be so, so, insubstantial compared to the big picture.

And yet it’s times like the above, when I was applauded for simply saying my name and what I do, that make it all worth it.