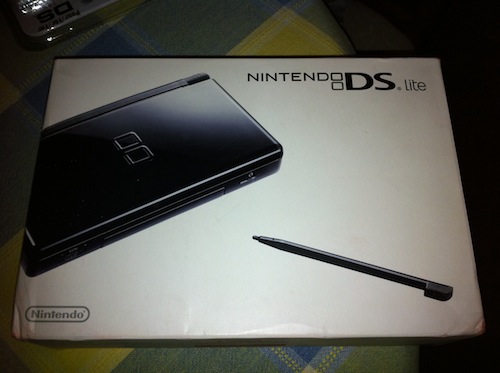 I feel as if there needs to be something written about the hardware that I’m using to play Pokémon. Not because it’s strictly that important, per se, but because it seems appropriate considering the circumstances (I’m a pretty huge geek about this stuff).

I’m using a Nintendo DS Lite. When I first started thinking about which console I was going to acquire I (naturally) looked up the appropriate Wikipedia page. Suffice to say I was spoiled for choice but eventually settled on the Lite — the original was no longer available (besides, I already had one of those before I sold it a couple of years back). The DSi looked impressive — hardware improvements all around, but the lack of a GameBoy Advance slot was a pretty big down side. Plus, the DS Lite also had the best battery life of all the DS models, including the XL and the current 3DS. No region lockout of games, and an older model (which meant a cheaper price) sealed the deal.

After the console itself was sorted out, I had to start thinking about games. Now, I’m using an Acekard and a EZ Flash 3-in-1 — but before we get into that, I just want to say something about piracy…

Piracy is bad, don’t get me wrong. It’s sad to see game developers and publishers put hundreds of hours into game development only to see none of the payoff. I guess there are all sorts of arguments for and against piracy, but in terms of games I’ve always held the opinon that games should always be paid for, with perhaps a couple of caveats. One, if the game is simply difficult to acquire. Two, if doing so is prohibitively expensive, either time or money wise. I’m not a collector — I just want to play the games, which is why I’ve got legal copies of Pokémon White, Soul Silver, Platinum (well, I did except it turned out to be a fake), Emerald, and Leaf Green. The GBA carts had to be off eBay.

Which is exactly what the Acekard lets me do. Along with the AKAIO firmware, I get to play games — and as it has a micro SD card slot, I don’t have to swap DS carts to switch between DS games.

Now, the 3-in-1. Basically this thing plugs into the second slot on the DS, the GBA slot, and has a couple of cool things — a rumble feature, RAM for a browser, and so on. However, the one thing it does do brilliantly is GBA compatibility. The reason I chose the 3-in-1 is because it works very, very well with the Acekard with AKAIO software — load some GBA games onto the Acekard (as the 3-in-1 doesn’t have non-volatile storage), and the AKAIO firmware detects the 3-in-1 and automatically loads the GBA ROMs onto the 3-in-1 if you decide to load one of those. It’s completely transparent to the user, and works very, very well.