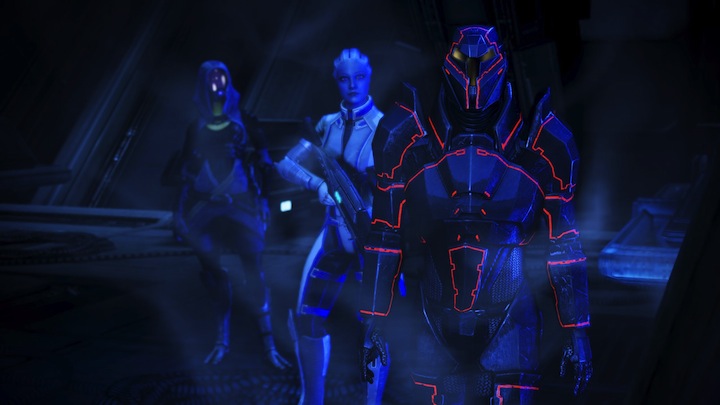 Now that I’ve finished my first playthrough of ME3 and grinded my way through some multiplayer, I’ve been sitting on a second playthrough for about a week now.

That is to say, I’ve started my second playthrough, but haven’t actually played any of it yet. A FemShep, Vanguard, Paragon, if you must know.

The way I’ve played all three Mass Effect games thus far is that the first play through is always using the default male Shepard, with all choices made as I would make them. Usually this falls on the Paragon side of things, with decisions made as I would make them (with perhaps a bit of divination as to what might happen in the future). Many people play Mass Effect like this, as it is, after all, a role-playing game.

The second play through is a little more relaxed in terms of choice. It’s the play through that lets me experiment with different choices, as well as allowing me to be a hard-ass Renegade where I believe it’s required. The second play trough is usually played as a female Shepard, too, just so I can experience another level of voice acting and see the difference between the two Shepards.

Now that the background is all out of the way, I can tell you why I haven’t brought myself to continue my second play through of ME3 beyond the first priority mission.

You see, dear reader, Mass Effect is all about choice. The Mass Effect series has always been about the choices you make as a player, as male or female Commander Shepard. And that’s why I can’t bring myself to play Mass Effect 3 any more than once.

Let me explain: in the first two Mass Effect games, you have lots of choices to deal with. Some of those choices carry across to the second Mass Effect game, and some of the decisions you make in ME2 carry across to ME3, and so on. Lots of choices, like, literally, quite a few — so many that it’s reported over 100 variables are carried across from Mass Effect 2 to Mass Effect 3. As an aside, the whole concept of continuing the same character across games is a brilliant, ingenious concept that I really think more games should adapt: rewarding players for hanging onto their save files so they can continue the story in future titles is nothing short of brilliant, and doubly so in a role-playing game centred around the story. There are small issues with this approach, one being that there isn’t a way to “confirm” your choices in later games (in case you lose your save file); what I’d love to see is some kind of prologue to each game that makes you make those decisions again, but I can see how that would potentially sour the game for many. Tough call, but I digress.

Okay, so back on track: Mass Effect forces you to make choices. Not necessarily decisions between good and evil, but more subtle decisions: sometimes the decision between being a nice guy and a ruthless hard-ass isn’t as clear as some of us would like it to be. Like whether to free the Rachni queen. Or whether to keep a mad Salarian scientist’s work on curing the Genophage. Or killing Urdnot Wrex on Virmire. And so on and so forth; as a player you’re never sure how the outcome of your decisions will turn out. It keeps you guessing throughout the series, and it’s great.

Now, here’s where it gets interesting: for the most part, you had no idea how these decisions were going to affect future games. Maybe your act of goodwill in letting the Rachni queen live will come back to bite you in the arse in a future title. Maybe Urdnot Wrex turns out to be indoctrinated, I don’t know. The thing is, in the first two titles of the Mass Effect trilogy, you pretty much can do whatever you want without there being too drastic consequences (at least, not consequences you care about, not consequences you actually know about).

Mass Effect 3 changes all of that. Suddenly, you know what the end-game is. Suddenly, your decisions will weigh heavily on you, moreso if you made the “wrong” decision somewhere along the line.

Being the third title in a trilogy must be pretty hard. Even before you rip open the packaging, you know that this is it. After this, there’s not going to be any of a series you have some kind of a vested interest in, emotionally or otherwise. You know that after this, there will be no more. It’s the final countdown. The end of days. The beginning of the end.

Which is why, as you make your choices in Mass Effect 3, you make them damn carefully. Unless you’re some kind of sadist who doesn’t care about the story at all, you’re going to try and get the “best” ending possible. You’re going to try and make peace with everyone. You try to “do what’s right”, to play the hero Shepard everyone seems to think you are. So many times during Mass Effect 3, I sat there for minutes on end, staring at that little dialog choice circle, agonising over the choice I had to make. Because short of saving right before and reloading saves (a practice somewhat frowned upon), there’s no going back. What choice you make will either be the right one, or haunt you until the very end. There’s no sense in being a ruthless, at-all-costs Renegade, because even though you might get the job done, you’re not going to make many friends along the way. And that, ladies and gents, could affect how it all plays out in the end. 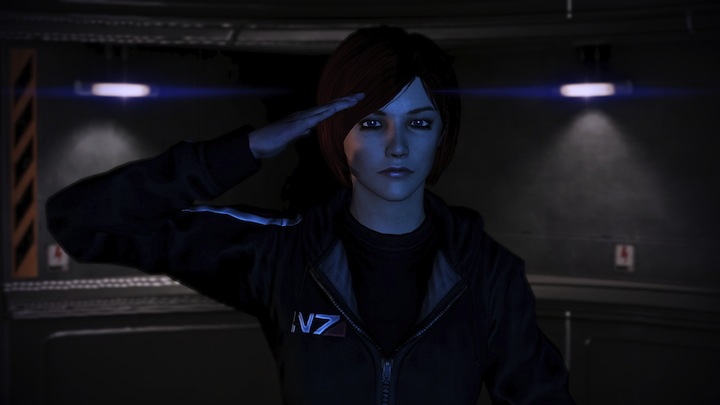 Which brings us, somewhat nicely, to the section wherein I talk briefly about the ending that everyone seems to be so upset over. People have petitioned Bioware over the ending in Mass Effect 3, and rightly so, in my opinion. Gaping plot holes and non-sensical cut-scene theatricals aside, the ending is so incredibly unsatisfying it’s an embarrassment. Unsatisfying is probably too light a word; if I’ve invested over a hundred hours into a series of three games spanning a number of years, I want the ending to be to my satisfaction. I’m all for leaving the reader guessing at the end, but the ending of Mass Effect 3 just doesn’t do the rest of the trilogy justice. It’s almost as if Bioware just ran out of time and/or money to put together something as stellar as the rest of the series, and now we have… The Ending That Shall Not Be Discussed. I mean, this is the culmination of everything you’ve been working towards ever since the first Mass Effect, and for what? I wish I could say something other than “a wholly unsatisfactory ending”, but I can’t.

Yes, it could probably be argued that the entirety of Mass Effect 3 is the ending to the Mass Effect trilogy, and in some respects you’d be absolutely correct. That’s not the point though, the point is that the climax of one of the most anticipated games this year, not to mention the entire series, feels like a complete and utter let-down by Bioware. They dropped the ball on this one; not just a small fumble, a complete and utter shambles.

Phew. The good news is Bioware has apparently caved and are planning to re-work things a little. Exactly what that means is still up in their air, but at this stage I’d be prepared to DLC my way to a better ending, whatever that might entail. Bioware, are you listening? I’ll gladly pay for a better ending, one that’s worthy of flying the Alliance flag.

But you know what? Mass Effect 3 is still a fantastic, triple-A title. As a whole, Mass Effect has evolved a little throughout the series, but only to culminate in what is easily the best game of the year thus far.

It’s a passable third-person shooter with quite a decent wave-based co-op multiplayer reminiscent of Left 4 Dead’s survival, or Horde mode in Gears of War, that also features objectives every few waves. The single campaign is where it’s at for the majority of players though, and that’s where Mass Effect shines. The storyline is unparalleled, the pacing, fantastic, and besides that ending that we really shouldn’t be talking about, it has very few, faults.

I’ll admit, there were many times during Mass Effect 3 that I felt something. Reunions with past squad mates in the previous game are particularly heartfelt, as is hilarious dialogue with likeable characters. Mass Effect 3 has managed to pull off one of the hardest hitting emotional aspects of any game I’ve played, and it does it so well. There were times during the game that I sat back and thought: hey, why don’t more games do this? Or, I love how this game manages to evoke some kind of response from the player. The down time between missions isn’t as frantic as the main storyline, and there are periods where you’ll be standing around on the Citadel trying to work out where you’re going/doing next, but it’s all good. All part of the package, if you will. Mass Effect 3 is, in my opinion, the pinnacle of gaming today, whether you think the ending sucked or not.

Mass Effect 3 is the very definition of Role Playing Game, with one of the most epic plots that’s as engaging as it is compelling — triple that if you’ve played the previous games; if you get sucked in, hang on and take a deep breath — you’re in for one crazy ride.