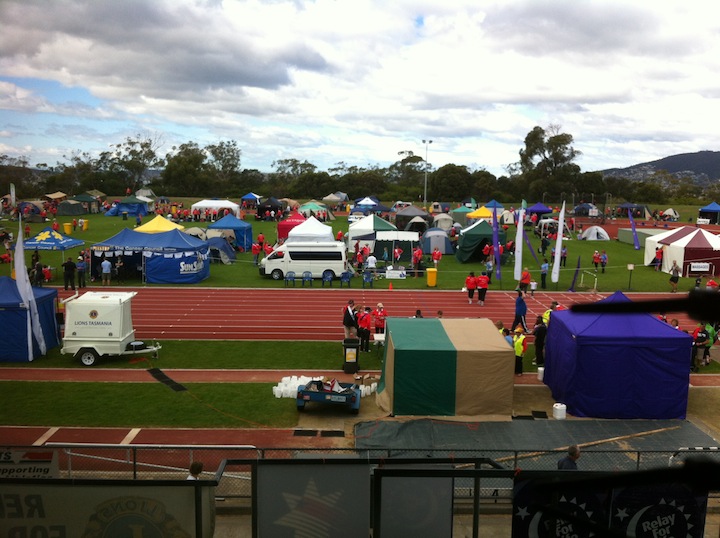 Another year, another relay.

After seeing a great tilt-shift time lapse by a guy in Melbourne, I thought it would be time to try my hand at time lapses, and what better event to do it at other than the Relay for Life 2012?

The original plan was to do a tilt-shift time-lapse in the same style, but then I found out that a lot of the work would have to be done in post. The way the guy did it in the video was with his Canon S95, a great little point-and-shoot. Turns out, the S95 does it pretty much automatically… Not fair!

With only a DSLR an still wanting to do time-lapses, I decided to acquire some gear.

First on the list: a GoPro. Truth be told this could have been anything with a built-in intervalometer, but I wanted to try a GoPro. In past years we’ve had a pram going around the track for close to 24 hours straight, so I thought making a time lapse of the event that way would be kinda cool. I borrowed a GoPro from my boss, and that was that.

During testing of the GoPro a few days before the event, I discovered it only had about 3 hours of battery life. I wanted to do a continuous time lapse of 24 hours, so I needed a way to power it. Cue external USB battery pack with massive 10,600mAh capacity and 2.1A output. The GoPro has a battery capacity of about 1,100mAh, so I was covered there. 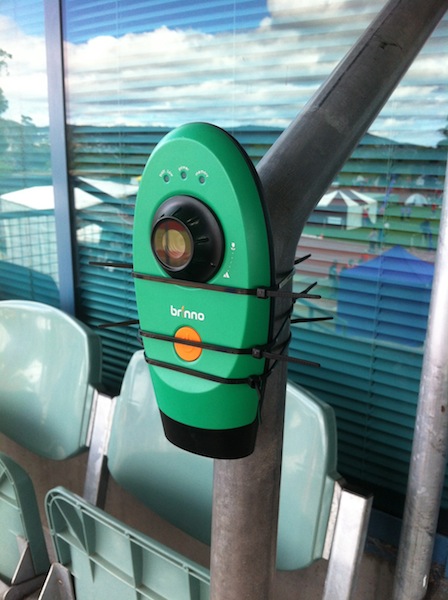 The GoPro would cover me from ground level, but I still wanted to do some kind of a tilt-shift one lapse. Or at least another time lapse from another vantage point. To that end, I borrowed a time lapse camera from a friend, a dedicated time lapse unit that was designed specifically to take time lapses of plants. The plan was to mount this unit somewhere up high, looking down on as much of the area as possible.

Finally, I borrowed a smaller point-and-shoot with a built in intervalometer from a colleague for even more time lapses, just in case things went pear-shaped with either of the other cameras.

With four cameras (three for time lapses and my own DSLR), I think I was ready for whatever was going to happen at Relay.

So, how did it all turn out?

The GardenCam got knocked about a little. You can see in the video above, it changes angle a few times, the quality isn’t great, the focal length is too long, yada yada. The positioning could have been better, but then mounting it would have been a pain. As it turns out, the GardenCam has a very slight (completely unintentional) tilt-shift effect — but I think that’s more the camera being completely crap at focusing rather than anything else.

For a time lapse to look good, you’ve got to have a nice connection between the shots. If the camera itself is moving (as mine was), then maybe shots more often is a good thing. I have a hunch that less FPS during the final movie (the 10-15fps mark, slower playback speed) in the final movie works better for time lapses with a fixed camera. Take more photos with a moving camera, speed up the FPS in the final movie (24-30fps). But then again, a lot of this is just pure guesswork on my part — you’ll just have to experiment to see what looks good1. Next time I would probably err on the side of taking more photos and varying the speed of playback in post — you can’t go back and re-take photos on the day, but you can cut out stuff in post.

Definitely worth looking at again.