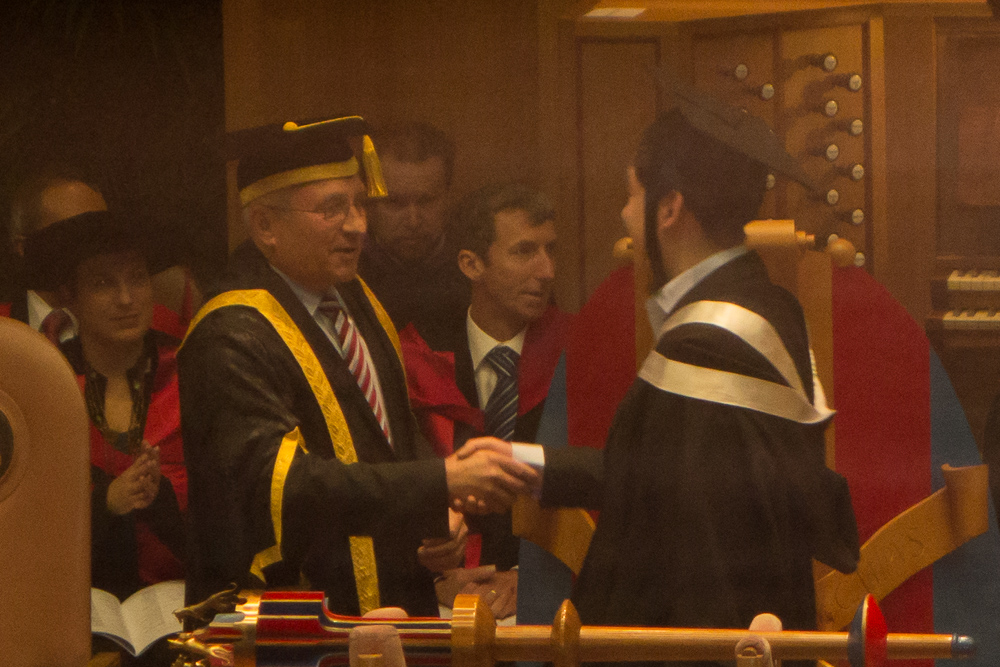 I promise you, this is a photo of me shaking the hand of the Dean at my graduation ceremony, not just a noisy, slightly out-of-focus shot of people in some funny hats. But it’s that too, of course.

It took me four and a half years to do it — when it probably should have taken just three — but it’s done, and honestly, I’m kind of glad it’s over.

When people asked me how uni was going, I almost always said “OK”, or “alright”. Never “fantastic”, “great”, or even “good”, but just “fine”, or “not bad”. I told others that I didn’t mind uni, but the truth is that I just liked the uni lifestyle; being able to do basically nothing for weeks on end was pretty great, right up until the point where I hadn’t started an assignment that was due in the next 72 hours.

Looking back at my time at uni, there’s a bunch of stuff I would rather forget. I’m ashamed to admit I failed more than a few classes due to sheer laziness on my part, and repeated multiple classes because I pulled stunts like not going to to the final exam. Mostly when I knew I wasn’t passing internally, but still. I’m keenly aware of the fact that if I was just a little motivated, or procrastinated just a little less, then I might have been able to complete my degree in maybe three and a half years, instead of the four and a half it took me.

It was around the end of my forth year when one particular individual asked me what I was doing at uni and how it was all going. This one time, I didn’t say that it was fine or good, but I said something along the lines of “it’s different to what I expected”, or “I’m not enjoying it as much as I thought I would”. It wasn’t intended to be a negative comment, but it just kind of came out that way. He seemed to sympathise, and said a degree was something that was good to have “under your belt”, so I should soldier on and keep at it.

I must have taken those words to heart, because that’s what I did.

That’s not to say I enjoyed uni immensely from that point on. I contemplated calling it quits a few times. More than a few times, actually. I never actually did (obviously), but there were times when I couldn’t be bothered going through another semester, another unit of whatever content was being offered up. But every time I thought about quitting I was always reminded that I had come this far, why throw it all away now? Quitting was never really an option when I thought about it — it might have been after the first year (at that stage I had no reason to quit), but it definitely wasn’t during the third or fourth years. No, there was nothing to do but grin and bear it.

And what do I have to show for it now? A degree, sure, but also a massive HECS debt. That’s not saying it wasn’t all bad (I would have made a good Arts student, I think), but there were certainly parts which could have gone better. Maybe I was to blame for that: it could easily be argued that by not putting in any effort than the bare minimum, I made things harder for myself. I’d probably agree with that statement.

The real question is: would I have fared any better if I had gotten into something I wanted to do, instead of my second or third choice? Hard to say.

Computing wasn’t my first choice; it was always the fall back option. Something I knew I could get into pretty easily, and something I might actually do reasonably well at. I remember the first time I posted exam results on Facebook, along with the comment of “not bad for all the effort I put in”. From memory it was all high distinctions and distinctions, and someone commented that “being gifted must be such a burden” — I found that amusing later on, when I was looking at exam results that weren’t all that crash-hot, i.e. failures. Needless to say, I stopped posted exam results after a few years.

Going back to the original question: would I have done better if I had gotten into my first choice (not that I didn’t try — twice — mind you)? I wouldn’t say I would have, but I wouldn’t say it was outside the realm of possibility, either. I might have found a great study group and been exceptionally studious, all because it was my first choice was actually something I wanted to do instead of something I did on the side, something I was interested in as a hobby.

At the end of the day, though, what’s done is done. I shrug it off like it ain’t no thang (sic), but I guess having a degree is an achievement, in and of itself.

Now all I have to do is make something of it. Find a job, or something.

Alternatively, I could always go back to uni, maybe even apply for what I wanted to study originally. But like that’s going to happen, right?