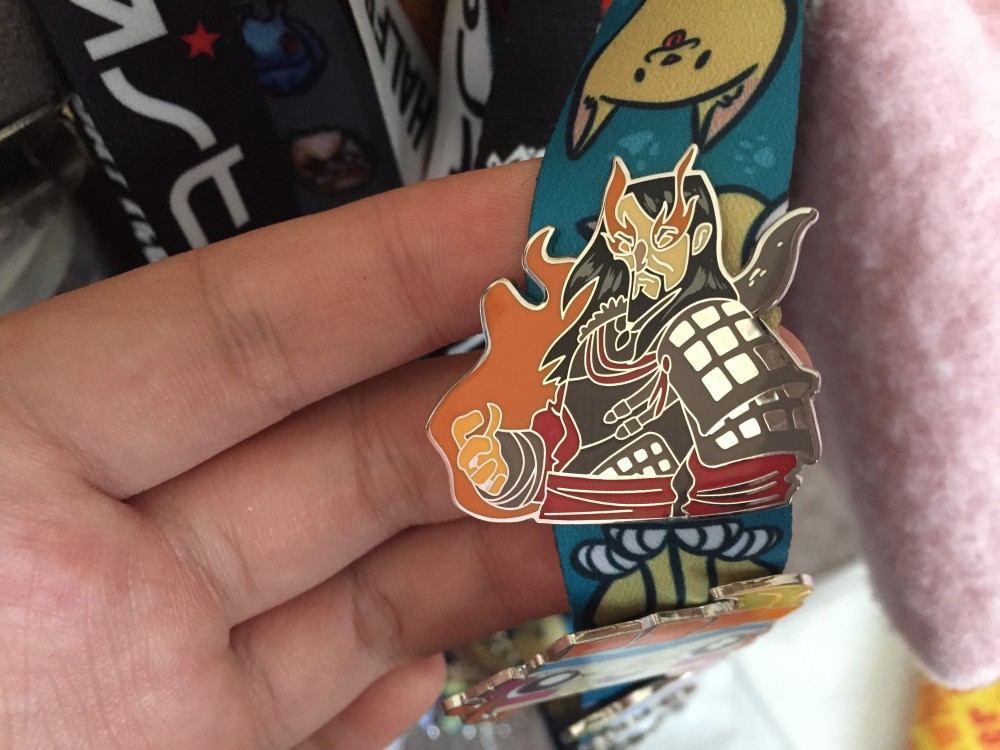 There’s this thing at PAX called Pinny Arcade, right, and it’s wonderful. It’s like a little subculture of PAX attendees who are obsessed about collecting and trading lanyard pins, almost kind of like Pokémon. You can buy many of the pins at PAX events or from the online store for little effort, but the most coveted ones are the ones that you have to trade other collectors for: Penny Arcade staff, some easier to find than others. Some, like the Sarkhan pin you see above, can be earned through a series of events. This is the story of how I came to earn the Sarkhan pin at PAX Aus 2014.

At first, I wanted to trade someone for it, it being the Sarkhan pin. I was wandering the area for panels with a few friends; they were searching for PAX Aus XP QR codes, I was mostly just killing time until the next panel I wanted to see.

An enforcer was standing outside one of the panel rooms, and I was drawn to his glittering lanyard of Pinny Arcade pins. After a quick glance, only one caught my eye: Sarkhan. I asked him if he wanted to trade, and pointed towards the mean-looking dude with flames. He seemed momentarily confused, as if this was the first time anyone had ever asked him that question before, before answering with a question of his own: “you know it can be earned, right?” I asked him where, and he said downstairs, at the Magic exhibition.

My companions at the time had heard about this, and informed me three tasks had to be performed before the pin was awarded. This being day two, one of them said the pin was actually easier to earn yesterday, on day one, as only two of four tasks had to be performed, but now, it was three out of five. Feeling a little like Hercules and his labours, I parted ways with my companions and wandered downstairs, passing through the many glittering attractions of the expo hall before arriving at the tabletop area, just past the console and PC free play areas.

Upon arriving, I made my way to one of the Magic areas, as they were cordoned off into various sections. I must have had a lost and/or confused look on my face, because I was soon approached by a guy who asked me if I needed any help. I asked him where I could perform the deeds to earn a Sarkhan pin of my very own. Looking pleased I was not there to collect his firstborn and merely after a collectible pin, he directed me towards another desk, currently staffed by a man and a woman. I thanked him for his assistance on the matter and moved on.

At the desk, I was greeted by the woman, who asked me what I was after. I stated my intentions on collecting a Sarkhan pin, and with a knowing look in her eye, she handed me one of the cards that contained the instructions for the five tasks. I only had to perform three, and from memory, I could choose from learning Magic, taking a photo, duelling, spell-slinging, and one more that I can’t quite recall.

Being the non-nerd that I am, I opted for taking a photo as that seemed the “easiest”. The goal was to get the pin in the shortest possible time, and I was thankful that PAX was such an inclusive place: they knew that a lot of people wouldn’t be up for the nerdery of learning to play a collectible card game, so they had an all-inclusive activity that everyone could enjoy. I donned a silly hat, picked up a sword, and stood in front of the camera as it took a photo. Looking at the photo now, and I wish I hadn’t chosen such a girly pose…

With the first of three tasks completed, I had my card punched. One down, two to go.

Wow, two PAX Aus posts in one day? Yeah, it happens when you’re six days behind in daily blog posts for the month of November.