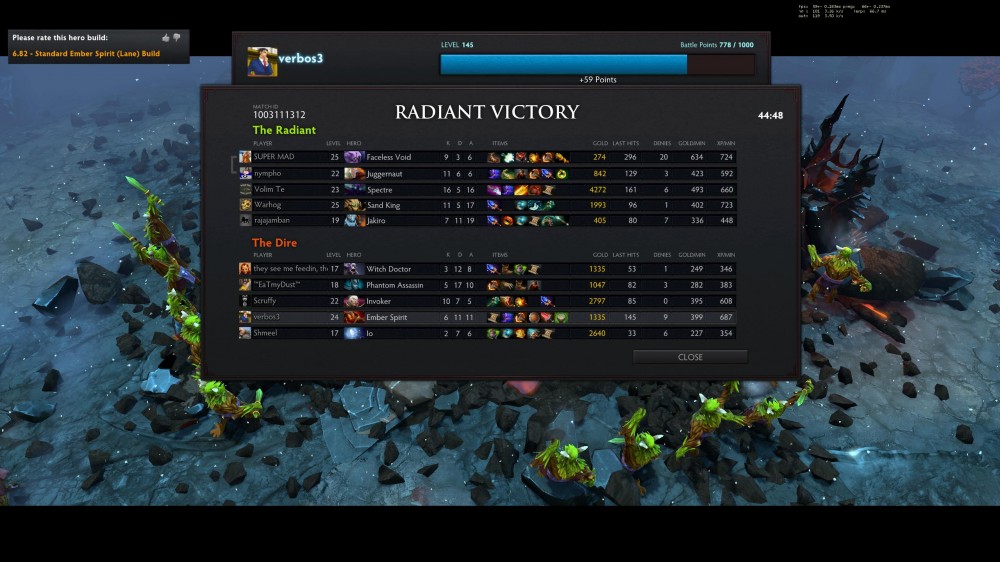 I call this one the PA that couldn’t last hit for beans.

OK, real talk: if a genie appeared and asked me what area of Dota I wanted to be perfect in, it’d probably be last hitting. Perfect decision making might be unachievable, but perfect last hitting mechanics are definitely within the realms of possibility. Not only can you practice last hitting without playing real matches, but it’s something you can improve in a measurable way.

Not only that, but having perfect last hitting mechanics has enormous potential to change your game, purely because if you can out-CS your opponents, you already have a huge advantage. You’ll have better items than them, and if you’re denying (something that’s incredibly important in the current patch), you’ll also have more levels over them, too.

When I started out playing Dota as a support, I didn’t think last hitting mattered all that much, purely because as a support, you’re usually not that farm-dependent. Sure you’d pull every now and again for your carry, but it wasn’t a big deal if you missed out on the last hit on neutral creeps in the jungle. A few more games of Dota later, and I can unequivocally say I was wrong in this regard, because last hitting matters to support as much as it matter for carries, and maybe even more so. Because you’re not getting as much reliable farm as carries, the last hits that you do miss out on matter even more as a support. Supports, generally speaking, don’t need items as much as carries do, but imagine how much better you could support if you had items. A fast Mek or blink dagger could mean the difference between a lost teamfight and one you win.

But I’ve started playing core roles now, and here, last hitting kind of matters. If I’m farming in the safe lane, I can average around 30-40 last hits at the 10 minute mark — not terrible, but OK I think for around my skill level. If I get free, uncontested farm, that number goes up to around 50-60, and if I’m having a bad time, I’ll have less than 30 last hits before 10 minutes. Against unfair Viper bot, with perfect deny mechanics? I’ll be lucky to have 20 last hits at 10 minutes.

I’ve thought about what to do when I’m playing a core role and am behind in last hits, and all it really takes is a couple of waves to get back to where I should be. That either means my team has to create space on the map so I can farm for a few minutes, or I jump into the jungle and hope I don’t get smoke ganked.

Unlike decision making, which can’t explicitly be practiced besides playing more games, you can practice last hitting pretty easily. By typing dota_tutorial_start lasthit will load up a practice game for you to practice your last hits against a single bot opponent, one that will stay the same depending on which hero and lane you pick. Starting up a bot game and just playing that has the same effect, but the last hit trainer means you don’t have to worry about ganks, tower pushes, or anything extraneous to perfecting your last hitting mechanics.

When I haven’t played Dota for a while, I’ll load up the last hit trainer just so I can get back into the feel for it. Because nothing — nothing — is as frustrating as a carry who can’t last hit. I practice last hitting so I’m never “that guy”, but I kind of wish other people would do the same.