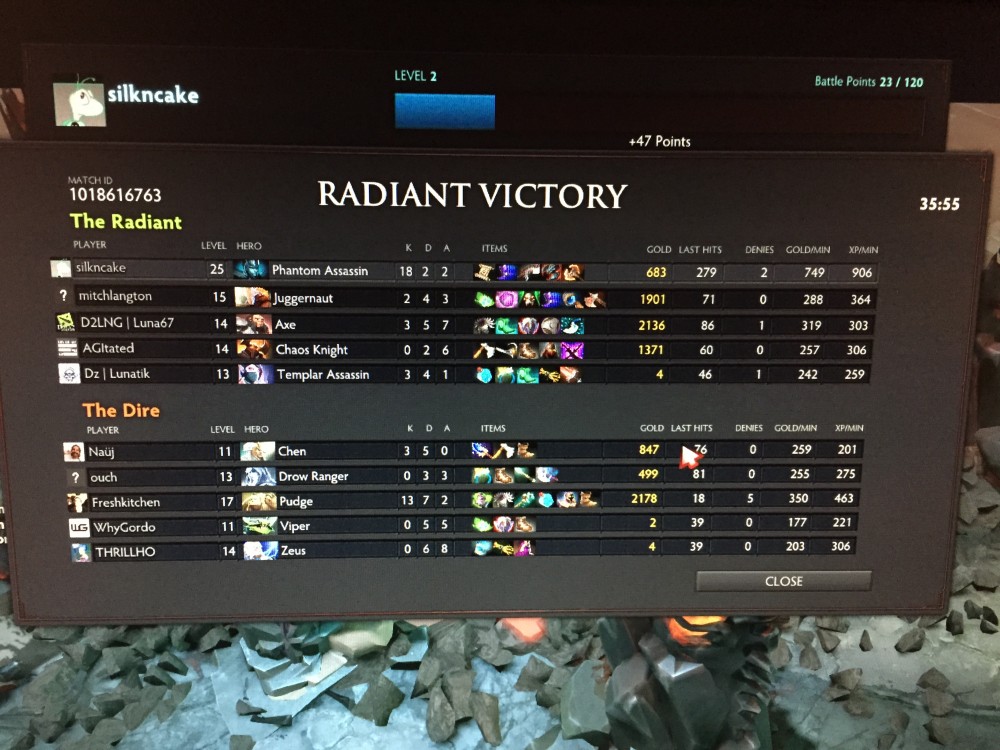 I probably could have taken an actual screenshot instead of a photo of the screen, but again, not my computer.

Continuing the list of things I don’t understand: smurfing. Otherwise known as the act of playing on a Dota account with a visible or invisible match-making rating lower than your own, in order to see how you fare against players below your skill level (or those also playing on smurfs).

Up until last night, I didn’t really see the point of smurfing. In my mind, the only two legitimate uses of it were either to play Ranked match-making with friends with a vastly lower MMR than yourself, or creating a new account in order to re-calibrate your MMR now that you know how to play the game, thus hopefully getting a higher MMR. Apart from those two reasons, there really isn’t any other reason to smurf — most of the other games I’ve played with or against smurfs have been very similar (or perhaps slightly above) to my kind of skill level, so what’s the point? Some people expect smurfing to match them with other completely new accounts, but Dota matchmaking is smarter than that, for the most part. After stomping a few games, you’ll start to get matched with harder and harder opponents. Eventually your invisible MMR will be the same as your “true” MMR, so the point of smurfing in the first place has been completely negated.

But last night, I played Dota on an account with one game played (plus a whole bunch of lobby/bot games), and it was, in a word, glorious.

I wasn’t really sure what to expect. It could have gone one of two ways: either I’d get matched with other people smurfing and subsequently get wrecked, or I’d be matched up against players who had a similar number of games played (i.e. they were just starting out) and completely steamroll them. It’s fairly safe to say I felt more than a little trepidation as I hit the queue button for All Pick.

Of course, there was no other hero to play other than PA, my current favourite carry. I wasn’t sure how the laning stage was going to go at this totally-unknown MMR, but I told myself I’d just play my own game, farm up as best I could, and then try and carry as hard as possible. Like other carry games, basically.

While my team were doing fairly average elsewhere on the map, I somehow managed to get a 17-minute phase/battlefury, even after dying once to a Pudge hook after a failed tower dive. The Drow on their team abandoned the game, so no stats were actually recorded, but it was pretty much downhill from there: I ended up with new personal records for XPM and GPM on any hero, much less PA — unfortunately those stats aren’t recorded on my Dotabuff profile, but that’s what I get from smurfing I guess. After battlefury I picked up helm of the dominator, then went skull basher, abyssal, satanic, bkb, and then boots of travel right at the very end. I managed to solo Roshan at about 25 minutes with a lucky double damage rune, which let me pick up my abyssal, and by that point, the game was more or less over.

As for the other players… the only other player who kind of knew what they were doing was the Pudge on the opposite team. He picked up a blade mail to (presumably) counter me, but it didn’t really matter though, as by that point I’d be able to Phantom Stirke up to him, throw abyssal onto him, then get a few lucky crits to kill him off before he managed to pop blade mail. Drow was slightly annoying with the silence, meaning I couldn’t quite get in range for a Phantom Strike, but after that wore off she, too, was pretty much dead.

The other players were completely underfarmed and underlevelled compared to me, so they were just food. I remember the time I one-hit Chen near the Dire secret shop. Another time I solo killed Drow and Viper who were attempting a push on our tier one mid, and then I managed to almost kill both Drow and Pudge who teamed up on me and made me consume my aegis. They backed pretty fast after they realised I was going to respawn — I attempted a chase but they must have TP’d out.

But as well as I carried that game, I still saw places for improvement. Most of my failures and screwups were from wrong settings — playing on an entirely different Dota setup than my own meant I had to re-bind everything for autocast, and then I found in the laning stage I would auto-attack creeps, so I turned that off two. I screwed up a TP early one when I respawned and the camera moved to the fountain making me TP right next to myself, so I turned that off, and then I had to re-bind hero hotkeys, courier, quick buy, sticky buy, and all the chat wheel functions.

The don’t even remember the second time I died. It may have been a gank when I was farming in the Radiant jungle but I’m not sure. I probably could have gone for more kills in the early game as the Zeus was really bad and kept getting clarities cancelled by Stifling Dagger, but the Chaos Knight I was laning with didn’t want to (or didn’t know how to) pull, so the lane was constantly pushed up against their tier two bottom (I laned in the radiant safe lane with a Chaos Knight who was fighting me for farm).

For people just starting out, item builds weren’t terrible, but I mostly put that down to Valve recommending items from the get go. Skill builds were pretty good as well — the Chen didn’t go Holy Persuasion level one, but still somehow managed to farm an aghs. He came to steal the dragon at the radiant ancient camp one time, just after I had finished farming them, and he died for that.

In summary: I didn’t understand smurfing. To some extent, I still don’t, but all I know is, I had a hell of a time playing on an account with a vastly lower MMR (I assume) than my own. Now all I have to do is not play very many more games in order to keep the MMR fairly low, and I’ll will continue to crit for days.

Match stats, for those that want it, are over at Dotabuff.