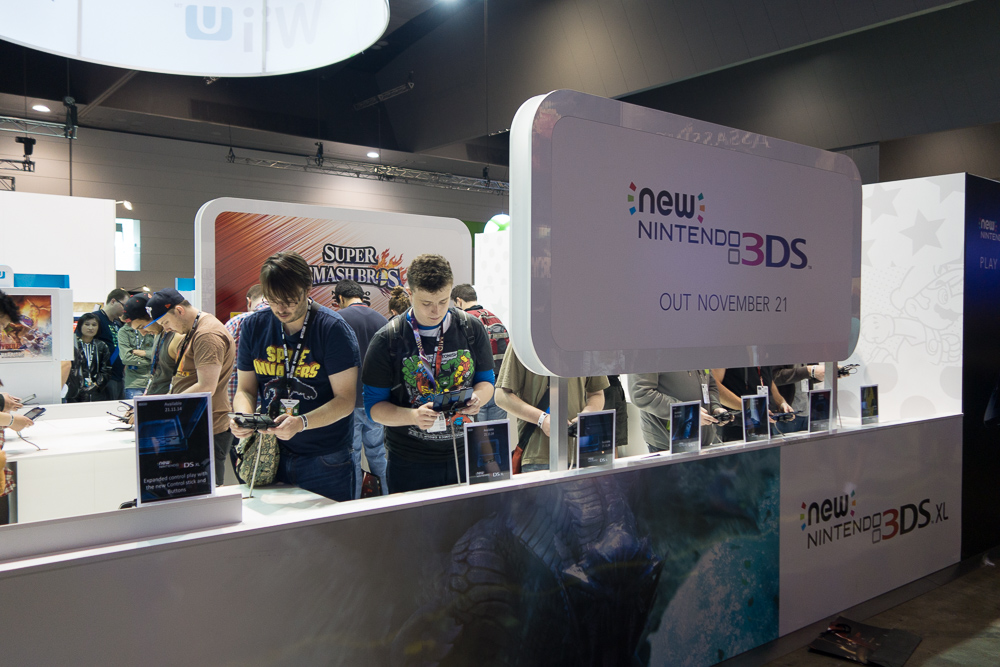 At PAX Australia this year I got some hands on time with the New 3DS. We lined up to watch a short presentation about it (barely audible over the din of the Riot folks and the Wargaming booth opposite), and after that it was into the little area where we got some hands-on time with the new console.

I know a little about the New 3DS thanks to some of the work I do, but it’s not like I’m an avid Nintendo fanboy who hangs on the company’s every word. From what I know, the New 3DS is notable because Australia and New Zealand are the two countries outside of Japan that will be seeing a release this year (November 21, if memory serves) — the US is getting it sometime next year, and other countries sometime after that again. While the New 3DS was on-show at EB Expo a month or so prior to this year’s PAX, PAX Australia was the first time the New 3DS was actually playable.

As far as the portable gaming console goes, Nintendo only had the New 3DS XL on display, which is somewhat disappointing because I wanted to see the size comparison between the new 3DS and the 3DS XL. Regardless, I had a bit of play on what I think was a Monster Hunter title (I’m actually have no idea, but it was some dinosaur-battling game from a third-person perspective set in an open-ish environment), as well as a bit of Mario Kart.

The console itself was pretty cool; the head-tracking 3D produces a much better 3D effect that follows your face so you don’t have to hold your head perfectly still in a tiny “sweet spot” for the 3D effect to work at all, and the extra should buttons will come in handy for some games. The new analog stick on the right hand side was a welcome change for games that need separate camera controls, but it felt more like one of those nub mouse pointers on older laptop keyboards. I wasn’t really sure what I was expecting it to feel like, but I guess that’s just how it is.

As for whether I’ll be buying the New 3DS, I’m not quite sure. I currently own a 3DS XL that doesn’t get nearly enough airtime, thanks to multiple other screens that are constantly vying for my attention. Mostly, I just neglect it along with my Vita and numerous other gadgets. Like my Vita, I imported my 3DS XL from the US because Nintendo persist with region locking (a topic I’ve written about before), and while recent news says upper management could be going in a different direction in the future, for the moment Nintendo consoles are still region locked. I haven’t looked into the issue for a while, but I generally prefer to have a bigger library available sooner as digital downloads, rather than having to buy cartridges — at the time, the US eShop was “better” than the UK/AU one for that.

A big factor I also have to consider is whether I want to go for the New 3DS or the New 3DS XL, with the biggest difference being that while the New 3DS gets the customisable faceplates (so. many. faceplates.), the New 3DS XL doesn’t. I originally went for the 3DS XL because I thought a bigger screen would be cool, but there’s no denying the 3DS XL is on the larger side of the spectrum. At the morning, I’m leaning towards the non-XL New 3DS, but who knows what I’ll end up with.

To be honest, I’m not even sure what games I want to play on the thing. Like I said, I’ve mostly ignored much of the portable gaming scene thanks to all the other stuff that’s going on (i.e. Dota) but off the top of my head the only game I’d really want to play is Smash Bros. And Hyrule Warriors, but that’s only on the Wii U.

And I definitely sure I don’t want one of those.

Vooks has a mega FAQ on the New 3DS and New 3DS XL for everything you need to know about the new portable consoles.