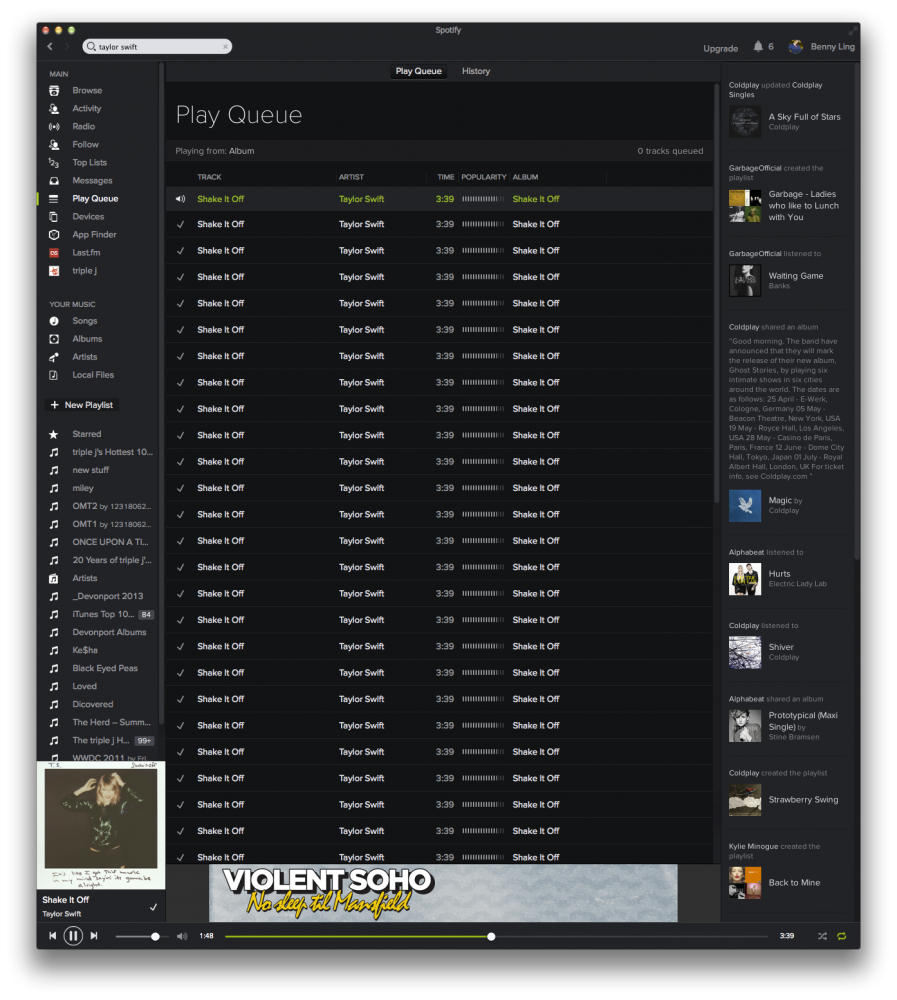 When Spotify was introduced to Australia a couple of years back, I wrote about how the music streaming service didn’t align with how I listened to music, both as a music curator and manic playlist creator.

For the most part, Spotify still feels more like a music lending service rather than a music library of your own. On the unpaid version of Spotify, you borrow music, one or two tracks at a time, and then you’re forced to listen to an ad before you can continue borrowing (or to continue the library metaphor, return the previously-borrowed tracks back before getting more).

If there’s one place where Spotify is better than my own personally-curated music library, it’s in the area of music discovery.

By all accounts, I have way too much music for any one person to listen to. Everyone does. iTunes puts my library at just under 12,000 songs with a total play time of 33 days, which means that assuming I live to the current Australian life expectancy of 80 years, I can listen to my music library 630 times in its entirety before I die. That’s quite a lot of music, when you think about it.

But even the largest music library in the world isn’t any good when you listen to a new tune and get immediately hooked. New music comes out all the time, and while I was never a huge fan of the radio, I’ll occasionally get exposed to new music via the radio or other means. Following artists I like and collecting their music is one thing, but discovering cool new tunes from artists I haven’t heard of is another thing entirely. So what’s the solution for new music discovery?

Maybe I’m a little different to you, but a lot of my new music comes from pop. I listen to many varied genres of music, but a lot of it is “pop” — or that strange genre which seems to be played mostly on the radio, encompassing everything from alternative, rap, hip-hop — you get the picture. I’ve previously experimented with trawling lists such as the Take 40 countdown to see if there was any music I was interested in, then go off and find those individual songs in order to pirate them. I used to do a similar thing with the iTunes “top tracks” list, seeing as iTunes has 90-second previews for most of its song.

A little while back, I started playing some new music with Spotify because I couldn’t be bothered pirating an individual track, and it kind of went downhill from there: I added Spotify’s top tracks in Australia to a playlist and went for the overplay, putting it on repeat. Then it dawned on me: music streaming was easier than music ownership, at least when it came to new music, stuff I didn’t already own.

So, for the month of October, I re-subscribed to Spotify Premium, giving me the ability to download high-quality versions of the music I was streaming, as well as going ad-free. I timed my subscription so it would coincide with a brief stint at work and my working holiday in Canberra, so I could have my “October hits” playlist with me wherever I was.

It’s not the first time I’ve re-upped for Spotify Premium for a month or two — I did a similar thing earlier in the year when I went overseas, all because offline play and ad-free streaming without having to lug around all of my own music is an excellent idea.

I’ve since cancelled my Spotify subscription, because as much as I like listening to new music occasionally, I remember that I still have my own music library that I love dearly. It’s uniquely mine — ludicrous playcounts, carefully-curated playlists, and all. Sure, it’s only $12 a month, but for someone who only gets so much out of streaming music, I’d rather buy an album every other month and support artists that way.