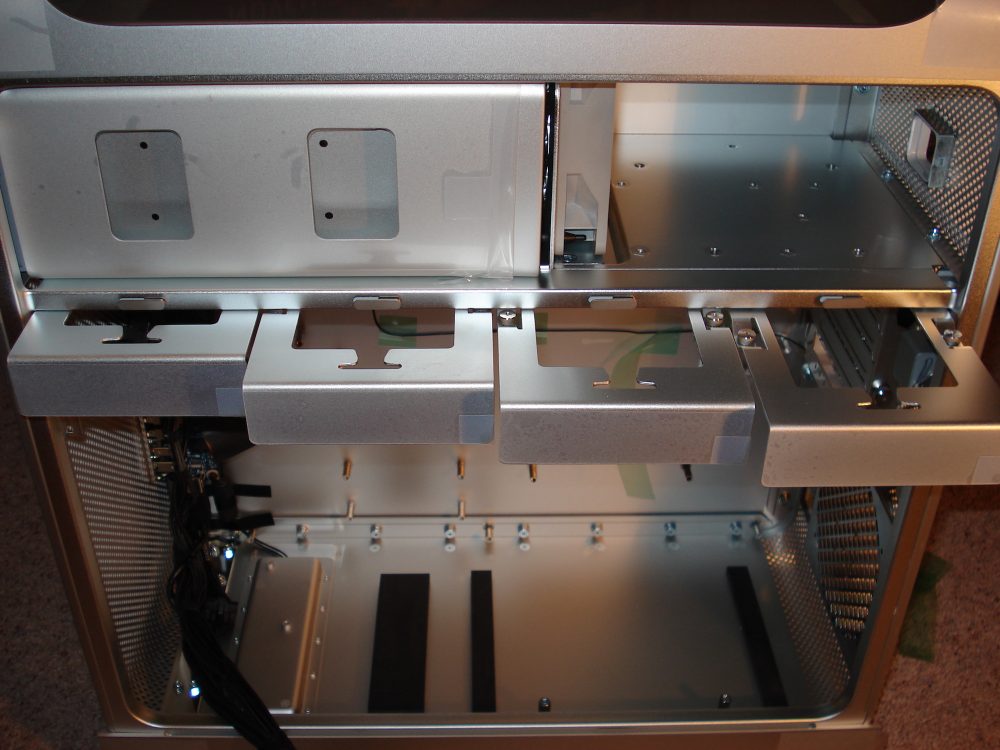 Through some fortutious mechanism I’m not entirely sure I’m allowed to disclose, one of my worldly possessions just happens to be a pristine Mac Pro case, to suit the 2007/2008 model Mac Pro

Note: this all makes a little more sense if you read this post first.

Hypothetically, if I were looking at switching to a single or dual-CPU Mac Pro as my daily driver and gaming rig two-in-one, I’d want to make sure it performs up to the standard of my current PC. At the very least, it would have to be close enough to make me feel somewhat OK about buying into a 6-year old platform.

Before we get into this: for the purposes of all discussion below, none of this is very scientific, but in an attempt to at least have a level playing field I’m using Geekbench as the benchmarking tool of choice. I would’ve like to have seen the CPU comparison from Anandtech, alas their Xeon benchmarks don’t go very far back. While they have the Xeons available in the current model of Mac Pro, we’re not really looking for a comparison between a quad-core CPU and one that has four times as many cores.

This is the Geekbench of my current PC. Comparing it using Geekbench’s Benchmark Charts tells an interesting story. The i7 6700K scores higher than any available Mac on the 32-bit single and equivalent (i.e. quad-core) multi-core benchmarks, even beating out some early-2009 Mac Pros which have double the number of cores. Predictably, the quad-core 6700K loses to the 8 and 12-core variants of the Mac Pro in the 32-bit multi-core benchmark.

So then the question becomes, what kind of Mac Pro configuration would I have to have in order to equal or beat my current Geekbench score? The bad news is, there’s no Xeon chip currently on the market that beats the 6700K in terms of raw, single-core performance. And if we’re looking at multi-core, we really have to jump up to a dual-Xeon configuration before we get to the same ballpark figures, and if we’re looking at eight or twelve cores, we’re also looking at the kind of power consumption that brings.

Good thing we’re well past the point where CPU performance matters for day-to-day tasks, right? A single-CPU Xeon X5690, a six-core, 3.47GHz unit, scores a paltry 2423 on Geekbench’s 32-bit single-core test. That’s not a whole lot higher than the i7-930 that I upgraded from, which scores somewhere in the mid 1900s. The X5690’s 32-bit multi-core test is a little more respectable, bringing home a Geekbench score of 16627, which is at least within striking distance of the four-core 6700K, but still short.

The fact of the matter is, no matter which way you try and slice it, no CPU configuration you can put into a 2009 or 2010-era Mac Pro will measure up to Intel’s latest and greatest, at least not without incurring an extra power or heat cost. I’d expect those 130W Xeons to get mighty toasty on occasion.

But what about current-generation Xeons? Hypothetically, what if I built my own Hackintosh, put the fastest Xeons I could in it, installed OS X on that thing and called it a day? Then I’d be poor, because top-of-the-line Xeons are not cheap, and the whole reason we’re doing this is so I can technically have a Mac as my daily driver and all-in-one gaming rig on the cheap.