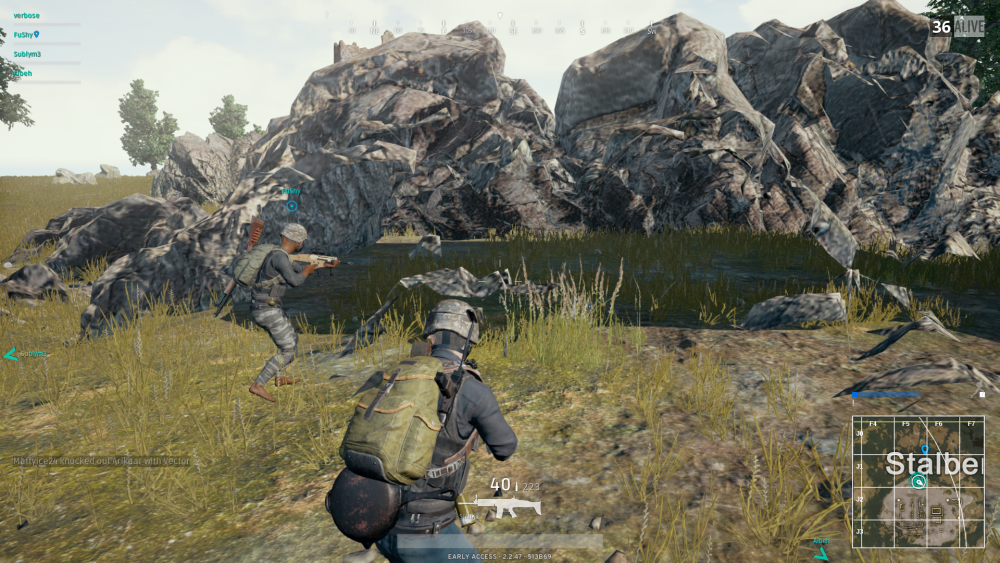 Yo, am I supposed to be able to see through these rocks, or what?

The end of the year is upon us once again. Wherever you look, there’s one game that’s making every game of the year list. I’m talking about PlayerUnknown’s Battlegrounds, of course, and no matter how many GOTY lists I read, it’s always PUBG this, PUBG that. Always in the top 5, if not at number one.

Don’t get me wrong, PUBG is a fantastically good game, and it absolutely deserves all the praise it gets. It’s been the only game I’ve really played this year besides DOTA and a minor fling with CS:GO that only lasted a few weeks. There’s just something about the battle royale gameplay of PUBG that makes it appealing to everyone, whether you’re a lone ranger slowly working your way towards a solo chicken dinner, buddied up with a friend trying to win as a pair, or working tactically as a squad, against a whole bunch of other squads.

You loot your way across the map. Hopefully the play area shrinks in your favour, lest you spend the entire round “circle-chasing”, constantly riding the outside edge, one bad encounter away from death. Occasionally, when you decide that you like the look of a set of buildings and decide to make camp, some unlucky squad will drive up, only to be gunned down by your squad’s perfectly orchestrated burst of assault rifle fire from multiple angles. Sometimes, you’ll be that unlucky squad, and other times, you’ll will that encounter, only to die to a unfortunate circle shrink mere minutes later, pinned down by two other squads.

Maybe you’ll be involved in an epic car chase. Be half-a-second late to save a mate. Jump out of a window to get into a better position. Crawl prone through some nice wheat as the battle erupts around you. Spray and pray with the micro-uzi. Get a lucky headshot to kill the last man in the squad. Notice someone out the corner of your eye. Revive someone, only to have them be immediately downed again. Or, if you’re really unlucky, get your entire squad wiped out by a single mortar round. 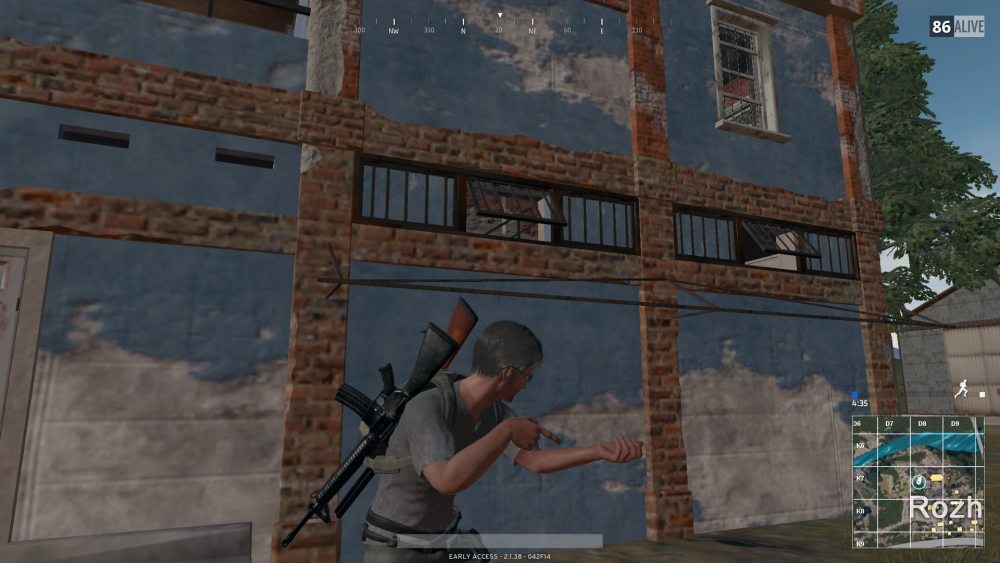 Has anyone seen my guns? I knew I left them around here somewhere…

PlayerUnknown’s Battlegrounds is a lot of fun. It’s all the more impressive that this game reached 1.0 just a few short weeks ago.

That’s not to say PUBG has been without its fair share of bugs. Everyone who has played before 1.0 experienced some kind of wonkiness. Nothing particularly game-breaking, just frustrating inconsistencies between patches that make you want to quit playing the game forever. I’m not talking about the patch-to-patch balance issues — we have to be a little lenient, given that it was listed as early access for the vast majority of 2017 —
stuff that was “working” in one patch is now completely broken in the next.

All of this might sound like PUBG is a broken mess of a game, but honestly, PUBG has been pretty good in that department. There aren’t many bugs that I can remember, and while the game will likely have “balance” issues due to what seems like an inconsistent ballistics model, those are unrelated to any technical aspects of the game. It’s by no means bug free, but animation bugs are about as worse as it gets.

But isn’t that the price you pay for being an early adopter? Isn’t the trade off of a few bugs — many of which you might never run into, most of which have workarounds, and none of which break the game completely — worth being able to play one of the undisputed standout titles of the year?

None of this is particularly new, of course. Even for games that aren’t listed as early access on Steam, games from developers and publishers bigger than PUBG have always had more issues on release than they do months after their initial release. Not because they couldn’t live up to their astronomical-levels of hype, but due to technical issues plagued them from the outset.

Prey is one such game. I’ve been playing Prey in the last week of the year. I remember the demo coming out a few months ago. At the time, I was quick to dismiss it after an hour of uninspiring gameplay. Truth be told, Prey didn’t even make it onto my radar of games this year. Seeing it on as many GOTY lists as PUBG changed that, and I thought I should give it another go.

I’m glad I did, because Prey is great, exactly the kind of action-RPG that I am into. In more ways than one, I’m glad I didn’t play it when it was first launched, because it apparently had save-corruption issues when it first came out. Save corruption bugs are the worst of all, because they’re lost progress, putting them squarely in the game-breaking bucket.

Unfortunately, this isn’t the first time Arkane/Bethesda has had launch issues with one of their triple-A titles. Dishonored 2 suffered at the PC performance altar when it first launched late last year, and it took a bunch of patches until it were finally fixed1. Even after six months, I still ran into one performance issue with one specific part of Prey, even though the game ran perfectly otherwise.

And isn’t that the ideal scenario? Wouldn’t you rather wait a few months to play a game you’re really looking forward to, just to make sure that all the bugs are ironed out of the 1.0 release, so you can have the best possible experience of the game?

In a perfect world, games would be released with zero issues. In reality, games are often broken on launch because programming is hard and because people aren’t perfect, so we end up with these bugs and issues. In the world of pre-order bonuses and where games spend years in development, it’s hard to not want to play a game as soon as it comes out, even if that means using a VPN to get a few extra hours playtime because the game has already been released in a different region. All I’m saying is, sometimes waiting can pay off.

But bugs can be fun too. 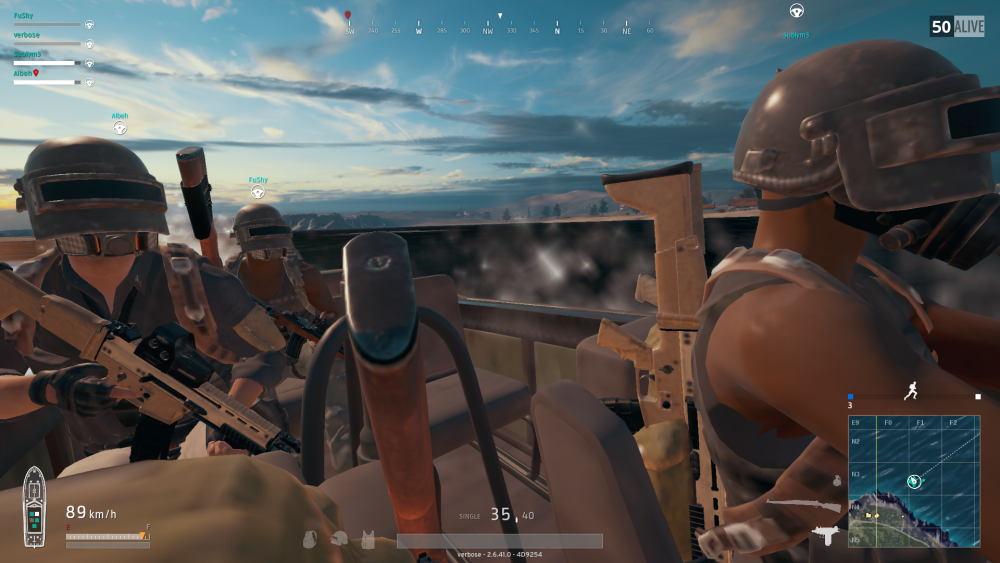 I call this one “the level 3 helmet squad”.