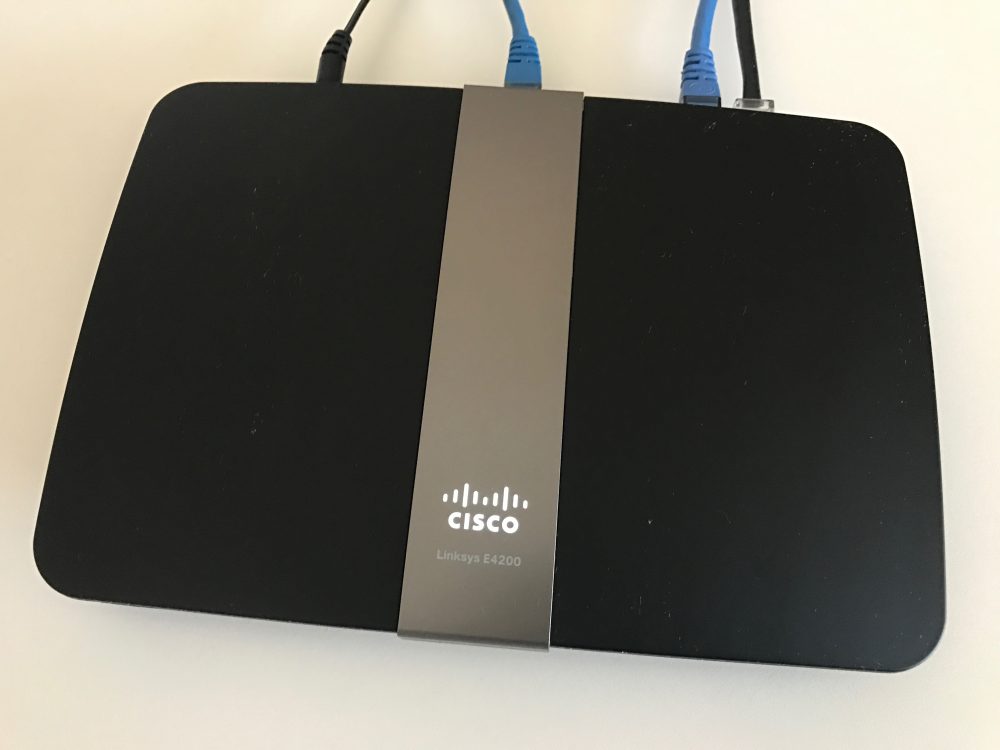 Back in August 2013, I wrote about the simple, it-just-works mentality of Apple products. I was experimenting with dd-wrt at the time, and once I had worked out that it definitely wasn’t the simple option, went out and bought an Apple AirPort Extreme to serve our family’s NBN connection to every device in the house capable of communicating via TCP/IP.

And for a while, everything was great. The AirPort Extreme dished out fast, reliable Wi-Fi, just like it says on the box. A few years pass without incident, and when I move to a different state, I trust that my network setup is robust enough to require zero maintenance. But soon enough, my family begins to complain about internet issues. Unfortunately for me, the kinds of issues they describe necessitate an in-person visit to ascertain what the issue actually is.

I’m back in Hobart now, and the Wi-Fi situation is even worse than I imagined. I realise something is seriously wrong when I try connecting to the Wi-Fi. For some reason, the wireless network is broadcasting its SSID even though I’ve set it to be hidden. It also tells me the password is wrong, even though I, nor anyone else, has changed it since it was setup. I ask my parents more questions about it. We give it a reboot and leave it at that. I’ll need to witness a failure to figure out what’s wrong, not have it broken to begin with.

As luck would have it, the Wi-Fi dies a short time later. And that’s pretty much all I have to go on, given that I don’t have any other way of connecting to the unit to check it out. All the devices in the house are wireless and don’t have an Ethernet port; any troubleshooting that I was planning to do is severely hampered by the fact I can only connect to it wirelessly.

I mean, there’s an old XP box that still has one, but I’m not sure I want to try troubleshooting anything from that. My mum has a Surface (Pro?) that has an USB dock with an ethernet port, but I’m loathe to install some potentially dodgy Targus Mac drivers for it on my MacBook Pro. My sister has a MacBook Air, which doesn’t have an Ethernet port, and even my old Chromebook doesn’t come with an Ethernet port. Of course, I own a Thunderbolt to Gigabit Ethernet adapter, but I left it back in Brisbane, and buying another for the sole purpose to diagnosing a Wi-Fi issue seems somewhat wasteful.

In the meantime, I remember that I have an old Linksys E4200 sitting around. The same one that is currently running an older build of dd-wrt. The same one that I couldn’t get a full 100Mbps out of its WAN port from. In a stroke of genius, I realise that it will act as a “Ethernet” connection, if I setup the wireless radios on it and connect it up to the AirPort Extreme using an Ethernet cable. At the end of the day, I can always replace the AirPort Extreme with it, too, with a few caveats.

I update the build of dd-wrt on it, going through the same 30/30/30 reset, upgrade, then 30/30/30 reset process that I did to flash dd-wrt on there in the first place. I check out a few guides on how to set it all up it so I don’t run into the same issues that I did last time around, and after a few day’s worth of Googling, I have it configured just how I want. This time, when the Wi-Fi on the AirPort Extreme dies, I’ll be ready.

The Wi-Fi dies. I’m still connected, but there’s no internet connectivity, and with a few diagnostic pings, I soon realise there’s no network connectivity, either. I connect to my backup wireless served by the Linksys and discover that it’s working fine. I can even still admin the AirPort Extreme via my E4200, which I’m currently using as a kind of wireless bridge in absence of an actual physical Ethernet connection directly to the AirPort Extreme.

Now that I know what’s wrong (intermittent wireless failures resolved by a power cycle, sometimes multiple times per day) now the decision becomes: what do I do?

Option 1: I could replace the AirPort Extreme… with another AirPort Extreme. But the cost of replacement is at least $250 if I go for a refurb unit, or $300 if I go for a brand new one. And while it may work well for another few years, what’s to say it won’t die in a similar fashion in another 3-5 years, or develop some other issue that kills it even sooner?

Option 2: I could replace the AirPort Extreme… with the Linksys E4200 I have right here. I’ve already paid for it, so the cost of replacement is nil, and with dd-wrt on it, the idea should be that I can admin my family’s Wi-Fi from wherever I’m connected to the internet. It’s got a pretty complex setup process, but otherwise should be fairly reliable.

I’m leaning towards option 2 at this stage. The idea is that I’ll give it a test run for the remainder of the days that I’m still in Hobart, and if I’m still happy with it, I can install it as the permanent replacement. The 100Mbps limit on its WAN connection isn’t a concern any more as my family downgraded to a 50/20 NBN plan once I left. It also “only” does 802.11n, not the 802.11ac that the AirPort Extreme was capable of, but my family doesn’t have any devices that would have taken advantage of the extra speed anyway, and plus, there are other bottlenecks in the home network I have to worry about before the speed of the wireless network becomes a limiting factor. Although it’ll kinda suck to be giving up the one dd-wrt device I have ever owned, I’ll know that it’ll be for a good cause (and hopefully mean I get a few less calls about the internet not working).

Replacing the AirPort Extreme also lets me remove another device from the network. I was previously using a small 8-port Gigabit Ethernet switch to serve a few wired Ethernet connections to a few computers, but now there’s only two wired devices (the controller for our VoIP phone and my trusty HP MicroServer). Everything else is wireless.

It might not be as simple as an Apple product, but somewhere in Hobart, a Linksys E4200 has found a new lease on life. Hopefully, for many years to come.