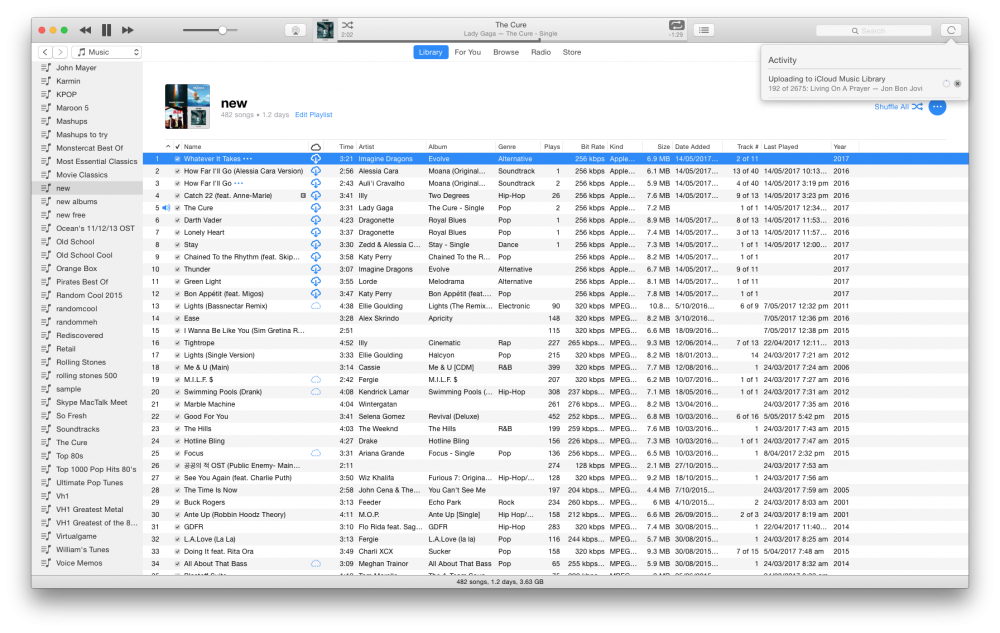 We’ll get back to the agony and ecstasy of personal transport in a bit, but I wanted to do a quick write up about subscriptions (and Apple Music).

I have something of an aversion to subscriptions.

It’s a bit of a dilemma for me, because while I get that you need to pay for things, the idea that I have to continue paying to get access to a piece of software or, to a lesser degree, some service, is kind of scary. I realise software development isn’t free, and subscriptions make for attractive revenue streams for developers who constantly work on new features, but not enough to release proper upgrade versions, but traditionally, paying an upfront cost for something and then owning it until the day you die is still somehow more palatable.

Maybe it’s just because we’ve paid upfront for software for so long that makes this idea that you need to keep paying or lose access to the stuff that you’ve worked on seem so foreign. Office 365 isn’t so bad in that you can still open and view documents created with the office suite, but even when the price of the subscription makes the cost the same over time, it’s still a hard pill to swallow.

At the time, the Photography Plan for Adobe Lightroom and Photoshop made a lot of sense. I recently purchased Lightroom 5 about a year after Lightroom 4, and at that stage I was paying about $100/year for Lightroom, so I’d essentially be paying $20/year extra for Photoshop which seemed like a great deal. Unfortunately, a few things have made this less attractive over time.

For one, Adobe hasn’t released a new version of Lightroom since 2015, so I’ve ended up paying more than those who picked up the standalone version. I also haven’t used Photoshop as much as I thought I would have, making that “added value” null and void, and to top it all off, Adobe has slowly increased prices. New subscriptions to the Adobe Photography Plan are currently $14.29/month, which starts to eat into that extra value of Photoshop, especially if you’re only using it a few times a year.

So that’s software, what about services? Things get a little more complicated when we’re talking about services. I don’t watch enough mainstream TV to subscribe to streaming services like Netflix or any of the other Australian offerings, and even though there are some great streaming services for anime, I’ve never really been able to reconcile paying a monthly fee for their entire library when I only want to watch one or two shows.

I think one of the main problems I have with subscriptions is that most of the time, I’d rather pay for an entire year upfront, instead of a month at a time. It’s weird, but I think I have an easier time justifying $120/year than I do $10 a month, especially if I’m getting some kind of discount that makes the annual option even more appealing.

How does all of this apply to Apple Music? To answer that question, we kind of need to talk about Spotify first…

I’ve never been a heavy Spotify user. While I enjoy using it occasionally for listening to new music, I’ve never ponied up for a Spotify Premium subscription for more than a few months at a time. My main use case for Spotify turned out to be using it in conjunction with favourite, now-defunct, music website. I’d “trial” songs in Spotify to see what I liked, and then go a grab them from elsewhere to add to my carefully curated iTunes library.

(It’s funny, because since writing that post back in November 2014, I’ve only increased the size of my iTunes library by about 250 tracks. Seriously, almost three years, and I’ve only added roughly a hundred tracks per year?)

On the surface, you’d think that Apple Music would be the ideal music streaming service for me. Completely integrated into iTunes and my existing music library, works with every device I own, and has a few other perks that mean I get my entire music library on all my devices without having to carry around 40,000 songs in my pocket (and buy the more expensive iPhone as a result). Plus, I mostly listen to pop, so the chances of Apple Music not having something I’m interested in listening to is pretty low.

The good news is, Apple Music is now mature enough that most of the kinks have been worked out. It’s no longer the all-you-can-eat music streaming service that also happens to completely destroy your music library, even though I still somehow managed to get duplicated playlists the first time I signed up for the three-month trial.

But when I let my trial lapse, exactly what I was afraid of happened: all the songs that I had added to my music library disappeared. A modal dialog box popped up saying I was no longer subscribed to Apple Music, and close to a hundred tracks were wiped from my library as if they were never there. All I was left with was half a dozen completely empty playlists, with the only evidence I had listened to those songs and not hallucinated the last three months being my scrobbles on Last.fm.

I’m pretty sure I want to subscribe to Apple Music again; I miss new music too much not to, not to mention there’s a new Taylor Swift album coming out in November. Since the demise of my music acqusition service, I’ve added nothing to my music library, missing out on new tracks by my favourite artists. In my three month trial, I probably added about just shy of 100 songs to my music library, most of it stuff that I had missed out on since adding nothing new to my iTunes library since December 2016.

So here’s the real question: given that I’ve only added a hundred songs to my music library every year, and an Apple Music subscription is $120/year, would I be better off spending $120/year on music and owning that forever, or having the transient nature of a music streaming subscription? That’s what I said I’d prefer doing, back in 2014. Obviously, a lot of Apple Music’s value lies in having access to the 40 million songs currently available to subscribers. But remember, I’m just interested in maybe a hundred tracks per year — and at roughly $17 per album, I’d only be able to buy about 7 albums before Apple Music becomes the more attractive option.

All of this means I’m no longer sure where I stand on music ownership. Back when streaming services were in their infancy, music ownership seemed like the better option; the music you had in iTunes or on your computer was yours forever, and nothing short of catastrophic data loss could separate you and your copy of So Fresh. But it’s 2017, and it’s pretty clear by now that music streaming is here to stay.

Now that I know what happens if I let my Apple Music subscription lapse, everything should be fine when I re-subscribe. Apple Music even offers annual gift subscriptions (which I assume you can gift to yourself), and you even get a discount if you buy a whole year at once. I guess I’m just overly cautious paying for subscription services. The jury’s still out on whether it’s warranted, but maybe I should just run with it. After all, over 30 million subscribers can’t be wrong, can they?