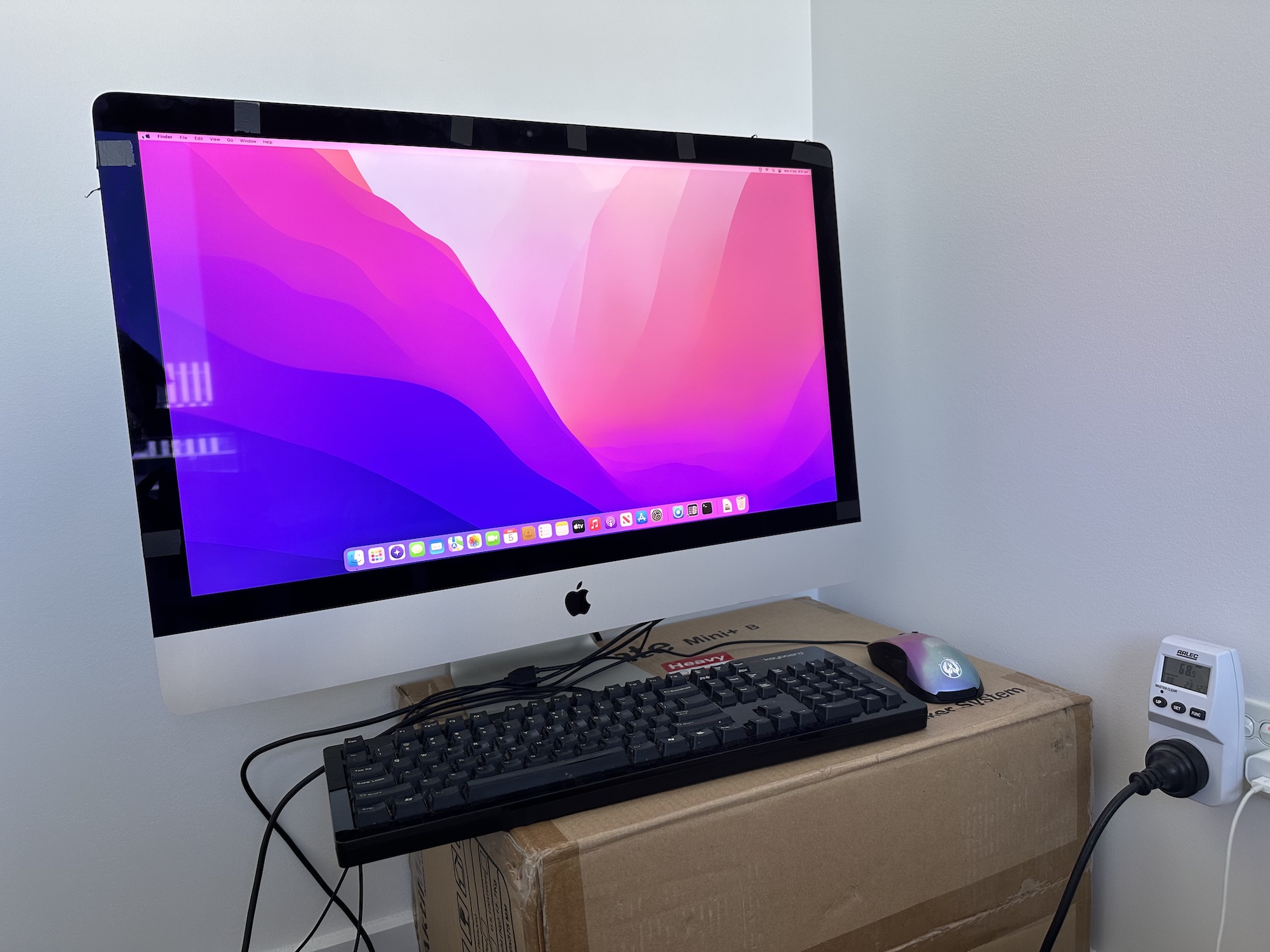 Yes, the screen is attached via electrical tape. Temporarily, because attaching it with adhesive is a one-time thing.

By some fortuitous mechanism that can only be described as “scoring something off the local computer forum” (close enough to be my own version of “scoring something for cheap off Craigslist”), I am now the proud owner of a late 2015 27-inch iMac. Yes, that’s right, the one with a 5K display. Now to be clear, there’s something wrong with this iMac, which is why I was able to get it for so cheap, but I figure if I can put a little work into it to get it working again, then that’s time well spent, in my books.

It’s a pretty decent-specced machine, too; an 4GHz quad-core Intel Core i7 (as it turns out, the same i7-6700K CPU that’s in my current gaming rig), maxed out with 32GB DDR3 RAM, and an AMD R9 M395 with 2GB VRAM. It’s in great condition, too. There are some very minor, superficial scratches on the display that you can only see if you’re looking for them when the screen is off, but otherwise no chips, dents, or scratches anywhere else on the screen or on the external aluminium enclosure.

The issue with this particular iMac was that its internal 3.5-inch hard drive was dead. These iMacs came standard with a Fusion Drive, which was Apple’s term for a SSD and HDD combo that was supposed to give you the best of both worlds in terms of speed and storage. This particular iMac had a 128GB SSD that still seemed to be working, but its hard drive was only good for making clicking sounds and being recognised as an unknown 4GB storage device, which I’m taking to mean it was one of those even weirder hard drives with built-in SSD caches, or something.

Installing the latest supported OS on the thing turned out to be a nightmare, even for someone who has had some experience with Macs. No matter what I did, macOS Monterey would get halfway installed before rebooting and restarting the install process. At first I thought this was some kind of reboot loop — an issue I also experienced with my own late 2013 MacBook Pro when attempting to install Catalina or Big Sur, I can’t remember which — but no matter how many times I tried, I couldn’t get Monterey to finish installing. Catalina, on the other hand, installed fine. I had issues getting Big Sur install media working, so for the time being, it was Catalina or nothing.

I suspected my Monterey install issues were related to the failed internal hard drive. That seemed to line up with the random kernel panics I was getting in Catalina, where it seemed like macOS would attempt to access the internal hard drive, realise it was dead, and then freak out and fall over when it didn’t know what to do. It seemed Catalina was as far as this thing was going. At least not without opening it up, disconnecting the hard drive, and then trying again… which is what I ended up doing about two weeks later, after some tools arrived for me to open it properly (and put it back together again).

See, my original plan for this machine was to turn it into a standalone 5K display. I had first heard of the idea via The Sizzle, a great tech newsletter by the founder of MacTalk. By pulling out all the internals of the iMac and replacing them with a relatively inexpensive — I’d hesitate to call it cheap, but it was definitely cheaper than buying a standalone 5K display — driver board you can buy from AliExpress, you can turn your 5K iMac into a standalone display that you can drive via regular old DisplayPort, which is great if you’re after none of the complexities that come with a Thunderbolt-driven 5K display1. A YouTuber probably wasn’t the first person to turn a 5K iMac into a standalone display, but they probably contributed to popularising the idea.

Like I mentioned in my other post on Retina-class displays, there are very few options if you want something other than the not-quite-Retina-class 4K at 27-inches, and none of them can be had for under $1800. With any luck, this iMac conversion will be a third of that. Not cheap — you could easily buy a great display for $600, even if it’s not quite 4K 144Hz, but 1440p 144+ Hz is easily doable — but much less expensive than what a new 5K display would set you back.

And all for an extra 55 PPI compared to my current 27-inch 4K displays? There’s a small part of me that wonders if all of this is worth it, considering this display “only” supports a 60Hz refresh rate, will have massive bezels compared to the 0.5cm ones on my current 27-inch, 4K, 144Hz display, and will require some creativity when it comes to mounting the driver board, it’s power supply, and all the DisplayPort cables inside the iMac, then pray that the third-party screen adhesive doesn’t fail six months after putting it all back together and send my glass display crashing onto my desk.

But after opening up the iMac, noting down the particular model and revision of display that I had, and unplugging the hard drive while I was in there, the machine now runs macOS Monterey perfectly. No issues. And with a little help from the OpenCore Legacy Patcher, I can even use the display as an AirPlay target from my iPhone or iPad, a feature that’s not officially supported by my particular iMac model, but one that now works. It’s currently taped up with some electrical tape and serving as my bedroom iMac, where I’ll sometimes throw up a Twitch stream or movie before I go to sleep.

All I’m wondering now is: do I still want to turn it into a standalone 5K display? After all, I now have a fully-functioning, albeit slightly old, 5K iMac. With only a 128GB drive I won’t be using it as my main machine anytime soon, but only a slightly harrowing disassembly process prevents me from upgrading the internal storage with a higher-capacity M.2 SSD. If I’m going to take out literally every component to get to the thankfully-not-soldered SSD, why wouldn’t I just leave everything out and replace the internals with one of those driver boards so I can give my dream of Retina-class displays a go? Of course, there are less involved fixes. I could pull out the dead hard drive, replace it with some 2.5-inch high-capacity SSD, and leave the rest of the internals alone, and I’d still end up with a working iMac.

Or do I take my perfectly working iMac, gut it, and put in a driver board so I can have a standalone 5K display that I can’t even put on a VESA mount? Will I be able to turn it back into an iMac again once I’ve had my fun in Retina land? Maybe.

All I know is, I’d regret it if I didn’t try. How else am I going to know if it was worth it? Worst case I mess it up, I put the internals back into the iMac, and take it to the Apple Store.

Not really sure what I would tell the Genius in that case, but it’ll be an interesting story. For another time!