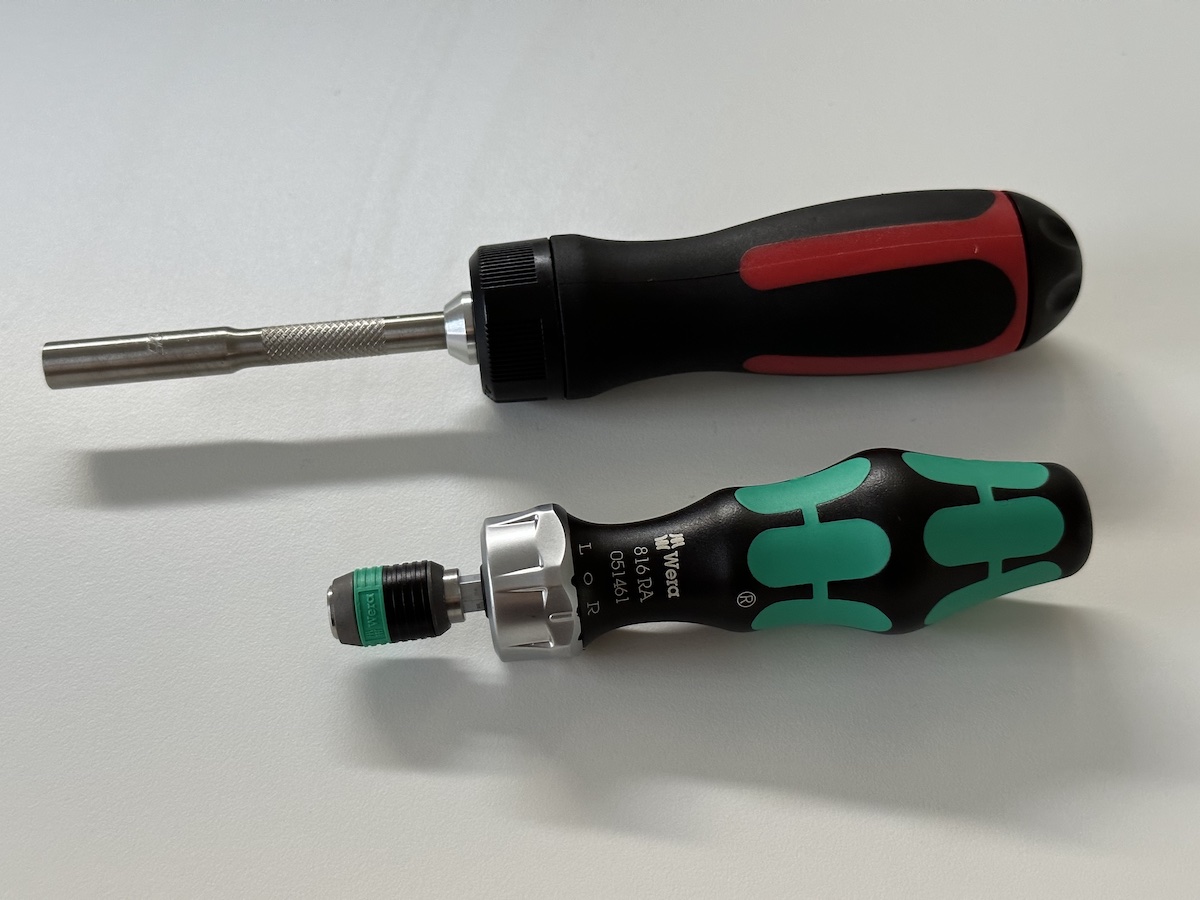 I have plenty of stories from my time at Next Byte. Maybe one day I’ll even write about a few of them, once I’m a little more comfortable the statute of limitations has passed. The one I’m telling you about today is about a really nice screwdriver I used to use, but also about some really nice screwdrivers I now own.

When I was doing iPhone repairs at my first place of employment, Apple mandated using a torque-limited, ESD-safe screwdriver on iPhone screws. I think this Wera 1460 ESD Kraftform Micro was the exact one that we used. It was a really nice screwdriver because it made it impossible to over-tighten the screws used on the iPhones, thus preventing any tool-based damage to the devices, but my managers at the time took every opportunity to remind me how expensive it was if, for whatever reason, it needed to be replaced. Which was fair enough, Apple repair margins were slim enough without having to pay three figures for tools, but it meant that while I wanted one, I could never justify owning one for the handful of times I’d need to use it around the house.

Just kidding! We’re talking about ratcheting screwdrivers, remember? That particular Wera torque-limited model wasn’t ratcheting, but I feel as though I would only own one (and the specific bit set that it comes with that can’t be used for any other non-Wera screwdriver) if I was getting serious about repairing devices, which I’m not. So the next best thing is a ratcheting screwdriver, which has more general use cases outside of device repair.

Because work has progressively slowed down as we get into the Christmas and New Year period, I’ve been watching a bunch of YouTube videos. And when you watch ANY tech-related YouTube, you inevitably get recommended the Linus Tech Tips channel. You know the one, all praise the algorithm. Which is fine, LTT videos are fine. They can even be great if you’re looking to build a PC, or see lots of sometimes very-interesting PCs get built. One thing I’ve been noticing is that they’ve been pimping their screwdriver for what seems like years now. And the crazy thing about how marketing works is that when you get repeatedly told about how great something is for long enough, you start thinking about how great it would be to have one of your own, even if you have no real use for it outside of a handful of times per year.

But the truth is I’ve wanted a ratcheting screwdriver for a while now.

Now, the question that you really need to answer about ratcheting screwdrivers is, what does it really give you that you can’t get from a good electric screwdriver, given that you’ll basically pay the same amount? And the answer is that, for the handful of times a year that you might actually use a screwdriver, you don’t have to worry about whether your screwdriver is charged, or worry about having to replace its batteries in however many years because the battery can no longer hold a charge and is borderline useless. Plus, by all accounts those handheld, pencil-shaped, battery-operated screwdrivers have such low torque anyway that they fall exactly into the chasm of suck between “might as well have used a manual screwdriver” and “might as well have used a proper cordless screwdriver”.

But a ratcheting screwdriver? When you’re working with computers, that can come in handy. Being able to use a screwdriver without having to remove and re-insert your bit into the screw, or take your hands off your screwdriver to reposition it, is actually super useful and comes in handy when screwing things in at awkward angles or when a little forwards pressure is needed.

But which one? Obviously, for any purveyor of LTT videos, the LTT screwdriver is the only choice. There’s only one problem: it’s $70 USD ($95 USD including shipping), which seems untenable in this economy. Even if it is undeniably good and purpose-built for working with computers, as you’d expect an LTT screwdriver to be.

So what did I buy instead? Two ratcheting screwdrivers, for less than what the price of what one LTT screwdriver would have set me back.

The TTI ratching screwdriver that I found at my local hardware store is pretty similar to the LTT one. Like the LTT screwdriver, there’s a knurled portion of the screwdriver shaft for when you need more precise rotation, and while it doesn’t have the fancy pop-up bit storage on the back-end, the end cap screws off to reveal a bit storage compartment. Although the 10 included bits are not mounted to the inside of the screwdriver, you can completely remove them and the clip they’re attached to if you prefer a lighter screwdriver. It’s even similarly balanced when the bits are stored in the rear compartment. But the TTI “only” comes with 10 bits instead of 12, and its included bits are less computer focused and more general use, so no hex or square bits. Instead, the TTI comes with Torx bits. The magnet seems strong enough, even if it’s not quite as strong as the LTT one. The TTI also has a satisfyingly loud, industrial-sounding ratcheting mechanism, and I picked it up because it seemed like the best option of the other ratcheting screwdrivers that they had available. Plus, it was comparatively a steal at $40 AUD — not the cheapest one there, but the it was better than the cheaper alternative.

The Wera 816 RA, on the other hand, was more of a luxury purchase at $66 AUD with no included bits. That’s not a huge deal, as I can either use an adapter to use some 4mm precision bits I already have from an older iFixit screwdriver kit, or use the bits that came with the TTI, or even choose to pick up another bit set entirely. But where the TTI is a fairly generic screwdriver, the Wera seems like some thought was put into its design. The handle is contoured, has grippy green rubber sections, and feels nice in the hand. The bit-holding mechanism is exactly the same as the one on the torque-limited ESD-safe screwdriver that I used for iPhone repairs, ensuring that there’s no way the bit is coming out when being used, and the ratcheting mechanism feels more precise and sounds more refined, more engineered, even if both screwdrivers have similar amounts of wobble and play in their mechanisms.

As for which one I prefer, I’m not sure. The Wera seems like it is better for more general PC usage, just because of how compact it is compared to the comparatively large TTI, while still being able to do some of the heavier duties like working on the exteriors of PC cases. But even the Wera is much larger and much heavier than the precision screwdrivers you can get from the likes of iFixit, which I prefer for using on tiny-scale electronics repairs like most consumer electronics, so maybe it really is just a case of using the best tool for the job.