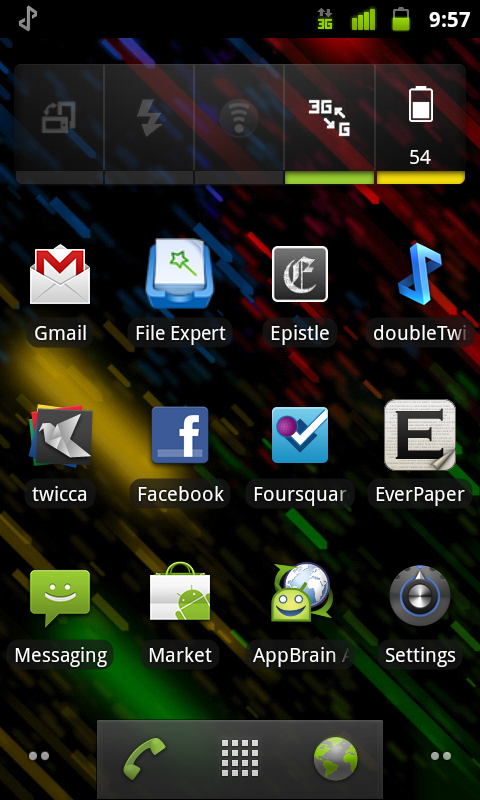 In my previous post in the series, I detailed a few of the more user-facing things about Android, like app management, music syncing, and so on. In this post, I intend to talk more about some of the finer points of things like text selection, general usability, and finally wrap it up at the end with a few choice sentences about Android as a whole and how it compares to other mobile platforms. If the previous post was about a 3 (not quite computer illiterate and yet not quite your average nerd) on the Benny Ling official scale of nerdery, this post is about a 6 or a 7 (getting up there). Not to mention it’s fairly long… You have been warned!

You want to talk about fragmentation? Okay, let’s talk about fragmentation. Fragmentation isn’t an issue. Geeks like us might like to harp on the fact that everything (apps-wise) doesn’t run on, everything (hardware-wise), or that some apps are restricted to certain regions, or that different versions run on different devices, but the fact of the matter is, fragmentation isn’t an issue for most end users. I say “most”, because if you’re one of the unlucky few who has chosen either the cheapest Android phone you could find, or somehow gotten stuck with a manufacturer notorious for releasing updates very slowly, or even worse, not at all, then, then, fragmentation might be an issue. You can hardly blame Google for your fragmentation issues though, as it’s up to manufacturers to release updates for their phones, which also makes it super-easy for them to drop support in way of software updates for a particular phone. Exactly why I would only ever buy an Android phone either from the Nexus series (as you’re guaranteed software updates, it being the flagship Android phone at any given time)), or from HTC, or any of the other big players (Samsung just manages to sneak in here) — any other manufacturer is a crapshoot. I mean, sure you can put the latest ROM or whatever from XDA Developers on your Motorola Milestone, but do you really want to learn about bootloaders, custom restore images, and all that kind of stuff? Perhaps if you’re a geek, otherwise, probably not. 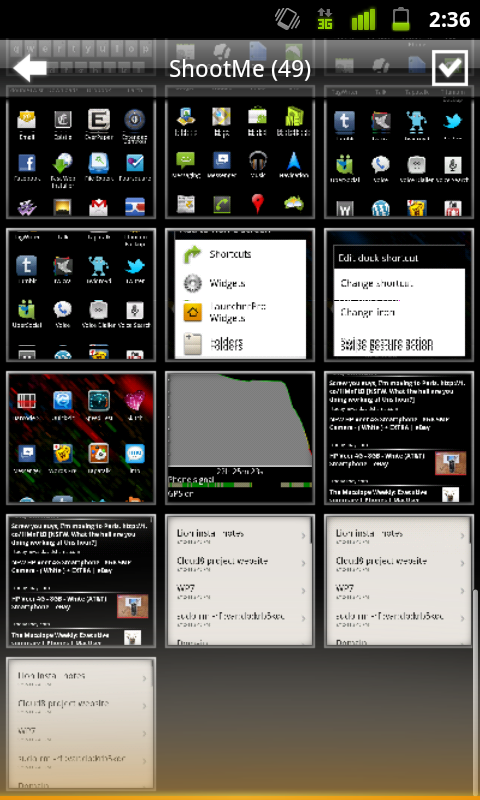 First seen in iOS, there’s a rather nice visual feedback effect to let you know when you have reached the end of a long list, or scrolled to the bottom of a webpage. The UI “bounces” to let you know there’s no more content, the scrollbar appears for a second to do the same, and you can go about your merry business. Android 2.3 brings a similar sort of effect, only instead of a UI bounce, you see a nice flash or orange whenever you reach the end of a scrollable section. It’s pretty nicely done — as you drag more and more away from the edge, you get more and more visual feedback (but only the very edge is tinted with orange, the rest is a semi-transparent white that builds upon the orange effect).

The funny thing is, I can only think of the Windows Phone 7 accent colour whenever I see these orange flashes. Orange is a good colour choice as it manages to stand out against pretty much everything, but it would have been nice if we had a choice of colours to choose from; I’m guessing that their particular implementation of this kinda of visual feedback means that basically any colour will be visible against the background. As it stands, the orange is used lots of other places, too — like when the spacebar can autocorrect a word for you, there’s a orange line that appears on it (more on text entry a little later), and even punctuation keys and suggested words use this orange colour. It’s not bad, but it could have been better. END_OF_DOCUMENT_TOKEN_TO_BE_REPLACED

As it stands, I have two assignments due in just under a week. They’re both major assignments — one requires me to write a few thousand words on ubiquitous computing with references AND do a not-insubstantial iOS programming task that involves pigs (no, it isn’t an Angry Birds clone), and the other requires me to do a Java-based version of Minesweeper.

I, of course, haven’t started either.

It’s not that I find the content boring (okay, maybe the Java one isn’t all that appealing) — heck, just today we were making a super basic read-only version of Twitter (but without actual tweets). The spec called for a normal UIButton to be placed somewhere in the interface that would link to a map view of the “tweets” on a map (I think the idea was that we were playing around with CoreLocation and MapKit). After trying a few different things and deciding that looked like crap, I stuck a UIBarButtonItem in the UINavigationBar, which made it look much cooler. A tiny, ten-second version of going above and beyond, but my interest was definitely piqued.

Like I said, it’s not that I find the content boring. Most of my Uni subjects have been interesting enough, but try as I might, I just can’t find the motivation to get things done (and by things, I mean super-huge-mega-assignments that always seem to get left to the last minute).

It’s not that I’m lazy, either — at least, I don’t think it is. I’m definitely very un-lazy about some things, recent examples including staying up for Apple keynotes, and downloading and installing the Battlefield 3 beta so I can play — and later this month, I plan to go to the midnight launch of Battlefield 3 at my local games store. That’s not lazy, right?

So what is it?

A choice except from the New York Magazine on The Steve Jobs and Mark Zuckerbergs of Tomorrow:

“Taking a job is in some ways like a ­second option,” says Akshay Kothari, who with his friend Ankit Gupta converted a Palo Alto garage into office space for their iPad-news-app company, Pulse. “If you say you’ve taken a job, it’s like, ‘Oh, you haven’t figured it out?’” Last year, the two Stanford classmates started building the news app as part of a class at the Institute of Design. Five weeks later, it launched on the iTunes App Store, where it sold for $4. It now has 5.5 million users.

The thing about startups is that I have no end of respect about what they do. Whether it’s all-night coding sessions or just churning out idea after idea, hoping one day to strike gold, that’s cool.

Basically, because I don’t have enough work as it is (October 2011 pretty much means Battlefield 3, I’ve already put some 12+ hours into the beta in just under a week), not to mention the end of the Uni semester (Official release of Battlefield 3 is October 25, last exam for the year is October 29, you do the math), I’ve decided to take up Blogtober for another year.

Same rules as the last time: a photo here, review there, random ramblings scattered throughout, but always a post a day. And catch-up posts where I forget — and sometimes even a little WordPress trickery when I’m a little late. I probably won’t be publishing anything from Posterous, but you might see the odd video or photo from me. Oh, another new rule: all posts published must be as original as possible. Photos taken by me. Video taken by me. Etc.