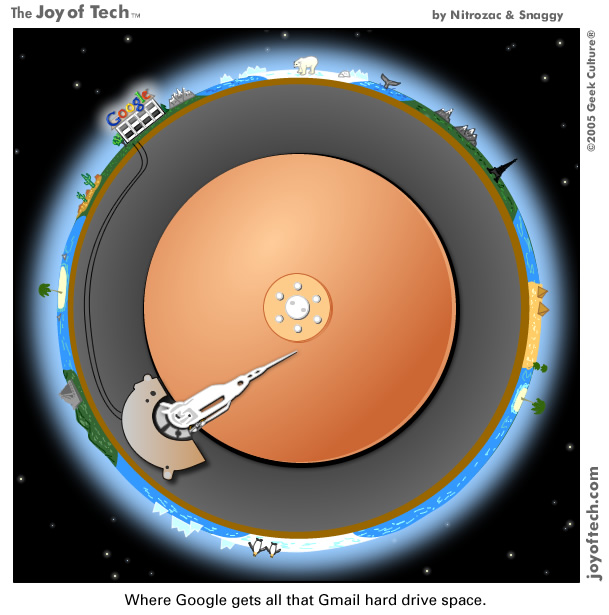 …and somehow, it’s probably possible within the next decade or so.

BLDGBLOG does some fascinating navel gazing on the subject of hard drive storage on the planetary scale: if ferromagnetically charged minerals can be arranged to make hard drives, what’s stopping us from turning Earth into one giant binary storage capsule, short of the technology?

If a 1.8″ drive can hold a quarter of a gigabyte, then the earth, measuring 6371km in diameter, would hold a hell of a lot more – obviously.

Good luck with those seek times, though. You random access times would be shot to pieces (unless you had heads that travelled at the speed of light). 😛

Telstra, in their infinite wisdom, have decided that their data packs are far too expensive and are now bringing up the included data in them.

It took them long enough!

The difference between the two to bring them on par in terms of data is now $16.50 – a reasonable price to pay, because Telstra has far better 3G coverage in Tassie that Optus, which only reaches Taroona according to some reports.

So Telstra, I salute you. Data AND coverage ftw.

Original link courtesy MacTalk, and the Telstra press release can be found here.

I’ll wade through the usual stuff and just leave you with the important bit:

In other news, the UMAT (that’s the Undergraduate Medicine and Health Sciences Admission Test, folks) was this Wednesday. Section 1 was hard, 2 easy, and 3 mildly challenging… Hopefully, I’ll do well, but as we all know, how ‘easy’ (relatively speaking) the test was isn’t necessarily a reflection of how ‘good’ you went 😀

If you’re wondering why this post is here and not on freshbytes – it’s ‘cos I’m trying to cut down on the personal posts on freshbytes, instead focusing on things that affect school life and so on… If you have any comments, feel free to contact me.

This post was composed and published from OSX blogging software, Ecto. I like using it because I don’t have to be online to compose posts, but it also allows me to focus on what I’m writing instead of getting distracted – which means more high-quality posts for you! There are a few things I don’t like about it, though, one of which is how it handles images – IMO, the WordPress editor is far better and handling those sorts of things. Anyway, most posts here will continue to be published in this way, and I’ll be doing some of freshbyte’s posts in this manner as well. I should publicly thank Martin P for purchasing Ecto for me – credit cards are great things – and so here it is: thanks!

More things will be here soon, I promise!