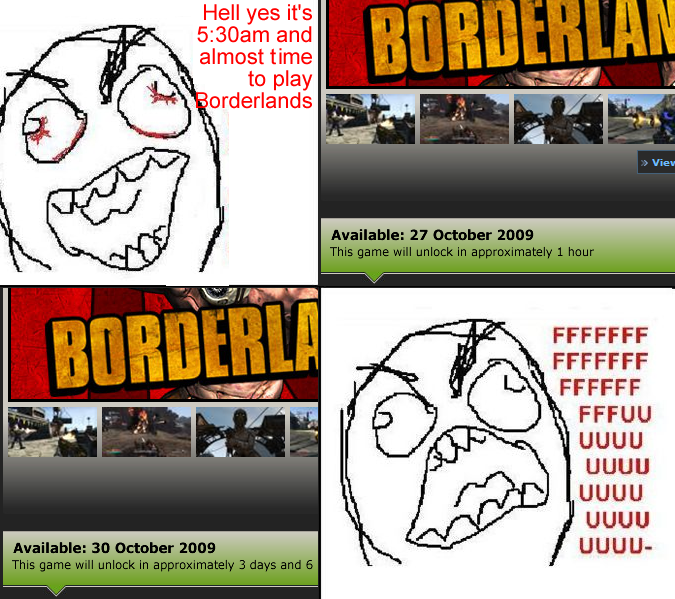 Yep – the above image was pretty much me at 6:30am this morning. (Image credit Whirlpool forums)

Having done lots of study the previous day to make up for what I had hoped was going to be an excellent day of FPS/RPG fun, I was greeted with the words “Pre-load complete; unreleased” when I looked at Borderlands in my Steam Games.

Shock turned to horror as I visited the Steam page for Borderlands, which happily, even casually, informed me that the unlock date had been pushed back a little over three days.

Horror turned to pure anger (much like the ragetoon above) when I realised what Steam had actually done – screwed Australian gamers over once again.

The official Steam comment is nothing short of abysmal:

The count-down you see on the page now should be accurate.

A SLIGHT MIX UP is the understatement of the year.

Here’s a quick recap as to what’s happened in relation to Borderlands so far:

So. Here we are – 3 days out of the official Borderlands release in Australia, all while our US counterparts are playing the game.

That’s not the real issue here, though – it’s the fact that, up until ONE HOUR before the game unlocked (that is, 5am this morning), the countdown on an Australian Steam client showed the US countdown. This just doesn’t make sense, especially when you take into account that there was a separate “Borderlands Australia” store item created in the first place.

Enough about that, though.

I’ve played Borderlands for a good 3 hours now, and can say it’s completely awesome, and deserves all the credit it gets.