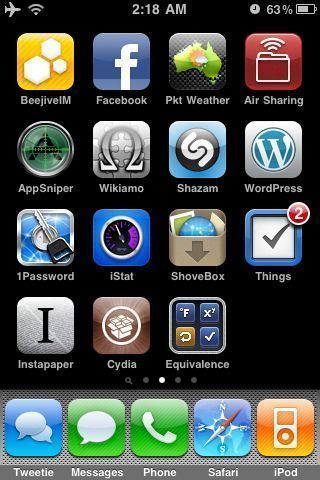 There’s a space on my second iPhone homescreen, and it’s just waiting for the perfect iPhone RSS reader to come along.

For that to happen, though, two things need to happen:
1. NewsGator (creators of Mac RSS client NewNewsWire), need to finish NNW 3.2, which brings with it support for Google Reader syncing, and
2. I need to decide on exactly which iPhone client to use.

Of course, I have little to no input on how the first is completed. The second choice is all mine, however, and it just so happens that I have a couple of candidates in mind…

There’s Byline, which has already been designed for Google Reader straight out of the box. From what I’ve heard it’s not a bad client, syncing and also caching articles so I can read them without an internet connection (hardly an issue on the iPhone, but a feature nonetheless). Because it’s been built from the ground up with Google Reader compatability in mind, the idea is that I won’t have any issue Starring, Sharing, or Liking items, just like Google intended.

The NetNewsWire client for iPhone, however, doesn’t event support Reader at this stage. Like the client on Mac which shares the same name, NNW on the iPhone is gonna be one of those “hackjobs” which have been “converted” to work with Reader, instead of being built from scratch. Can you feel the cynicism yet?

By all means, I’ll still be using the Mac version of NNW, only because there isn’t a Mac client for Reader outside of the web interface, short of rollling your own via something like Fluid.

Of course, the question now becomes exactly _when_ I’ll be able to migrate to Reader from whatever the hell I’m using at the moment… but that’s for another time (read that as rant), no?

I guess for now I’ll just have to leave that spot empty.