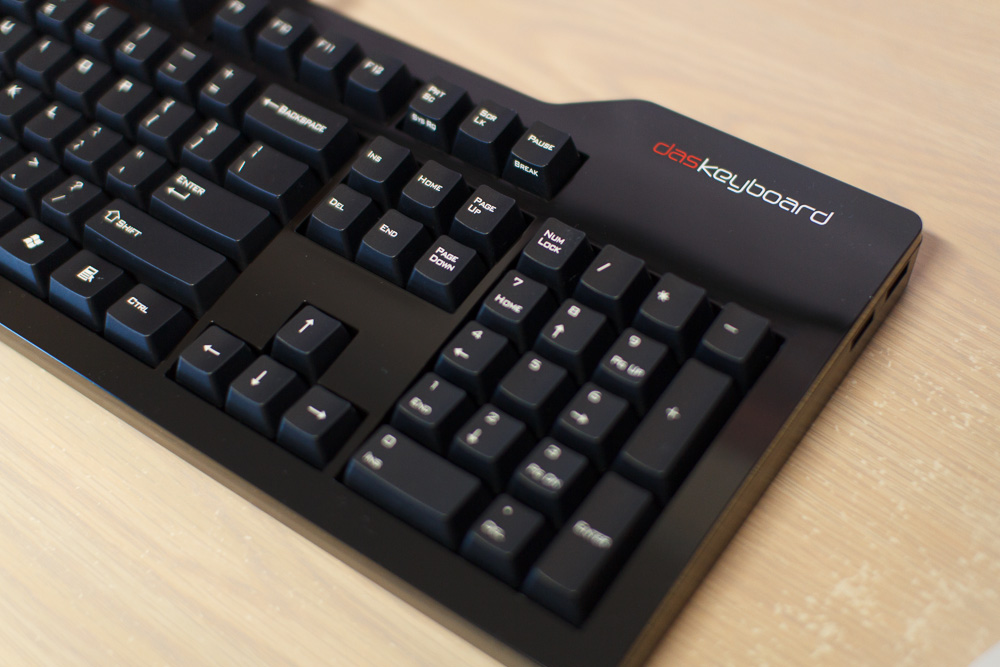 If there’s something interesting about humanity, it’s that people want better products. Products that not only satisfy some kind of need, but do it in a way that’s better than anything else on the market. From swanky coffee machines and Herman Miller chairs, all the way through to Apple products and whatever else you care to name, these kinds of products command premium price tags and claim to offer better experiences. And now, even the humble keyboards has joined this cohort.

The thing is, you can. Ladies and gentlemen, let me introduce you to the loudest, most obnoxious keyboard you’ll ever use: the mechanical keyboard.

A little while ago I picked up the Das Keyboard Model S Professional Silent, a mechanical keyboard with Cherry MX Brown switches (more on this later). It’s a mechanical keyboard designed for PCs, even though my primary usage is with a Mac (again, more on this later), and it offers a fantastic typing experience. As well as having the distinction of the most expensive keyboard I’ve ever owned, it also carries a far more prestigious title:

It’s the best keyboard I ‘ve ever owned. 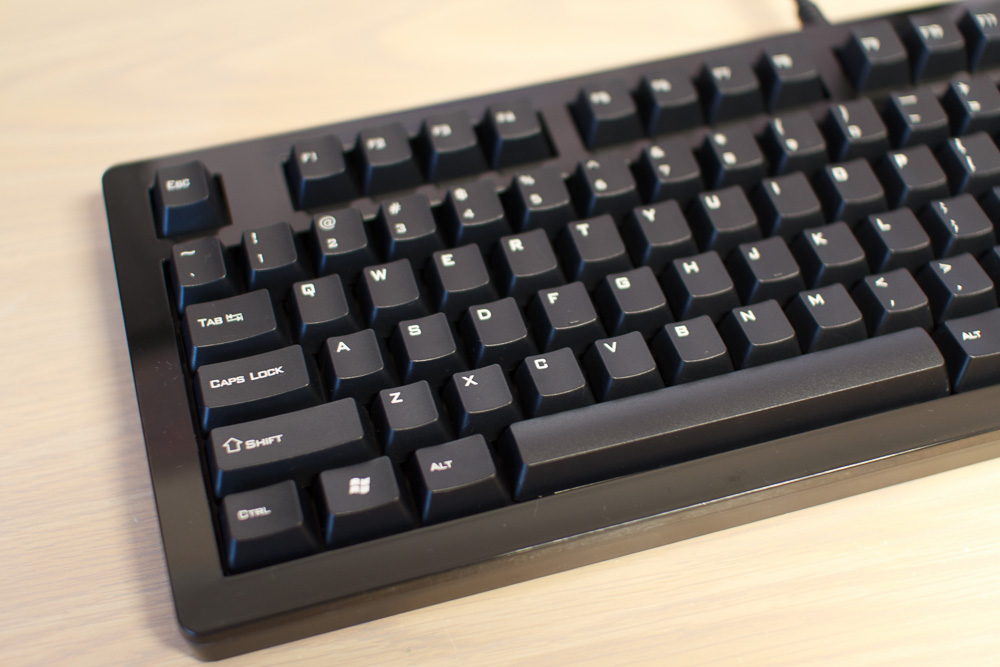 Aesthetics
The first thing you have to understand about the Das Keyboard series of mechanical keyboards is that they are big black monoliths. They can easily take over your desk if you give them the chance, and these days even my 27″ Dell UltraSharp looks smaller by comparison. From what I can tell, most of the Das keyboards sport more or less the same design: they’re big, black, and, for the most part, have glossy surfaces with matte black keys. The Professional series of their keyboards feature the labelled, laser-etched keys, while the Ultimate series simply have blank keys.

As for physical dimensions, the Das isn’t overly huge. Generously sized, perhaps, but not overly huge. They’re a few centimetres longer than the Apple aluminium keyboard with numeric numpad, my previous keyboard, but nothing too extreme. You probably won’t notice the extra length unless you have a tiny desk, or have some kind of aversion to innuendo in seemingly innocuous keyboard reviews.

Overall, the build quality of the Das is good. It feels incredibly solid, and seeing as it weights in at 1.36 kilos, this is the kind of keyboard that would make a nice impression on someone’s head, if it were to be used in that fashion. I probably wouldn’t recommend it, though — for one, you would definitely be kissing your warranty goodbye. Alternatively, if you’re one to fall asleep at your keyboard, I’m sure the keys will make a lovely impression on your forehead.

A extremely bad photo of a very good keyboard.

The Das is no different in this regard, and every key has a satisfying click-clack sound that can’t really be explained. Suffice to say, it’s going to be much more different than any non-mechanical keyboard you’ve ever used — you’ll definitely know when you hit a key, as each keystroke sounds different.

At first, you’ll hate how loud and different this keyboard is. I certainly did — being able to hear every keystroke was painful. It was awful — the sound was incredibly jarring, coming from a near-silent Apple aluminium keyboard. But over time, you’ll get used to it. Roughly around the one-month mark, you’ll stop noticing how obnoxiously loud your keyboard is, and simply turn up the music to compensate. Yes, you might still cringe every now and again when you’re tapping out a review well past midnight, but for the most part, the sound becomes unnoticeable once you’re accustomed to it.

What’s hilarious about this keyboard is that even though Das Keyboard market this particular model of keyboard as the “Silent” model, it’s still quite loud. I do quite a bit of my typing past midnight, and other family members have complained (and continue to do so on a frequent basis) about how much noise I make. Perhaps the walls in my house are thin, but you can definitely hear the click-clack of my keyboard at night from adjacent rooms. You can somewhat reduce the sound by hitting the keys more softly and not hitting the bottom on every keystroke, but it’s hard to type fast in this fashion; if you’re typing fast, there’s just no dampening the sound of the keyboard as you type.

I wouldn’t go quite as far to say it’s an aural delight mostly due to how jarring the sound is at first, but how the Das sounds is quite different from any other keyboard you’ve used, and much different to the silent-by-comparison Apple Aluminium keyboard. You’ll probably get used to it, even if you do cringe every now and again at how loud the sound is when you’re typing fast. Over time, you might even come to enjoy the sound — the tactile feel and feedback you’ll definitely come to enjoy, but the sound is another matter entirely.

A mechanical keyboard review wouldn’t be complete without at least some kind of discussion on the various Cherry MX switches, so let’s do that: the Professional “Silent” keyboard uses Cherry MX switches of the brown variety (normal Professional keyboards use Blue switches). Brown switches are sort of a half-way point between tactile and audibility. In my mind they’re sort of a halfway point, in between the more popular Blue switches (loud and clicky), and the Red switches, which are a lighter key with little feedback.

I’m not entirely sure how Brown keys stack up against the other colours, for the simple fact I haven’t used any other colour. (I’d buy keyboards of every type and try them all if they weren’t prohibitively expensive) I believe most people buy mechanical keyboards with Blue switches, purely because they seem to be the most popular — but the differences between the various switches is striking. I don’t think I’d like Blue switches, for example, as they’re louder still. If I were to buy a second mechanical keyboard, I’d probably spring for the Black or Red variety.

More on the various switches here. 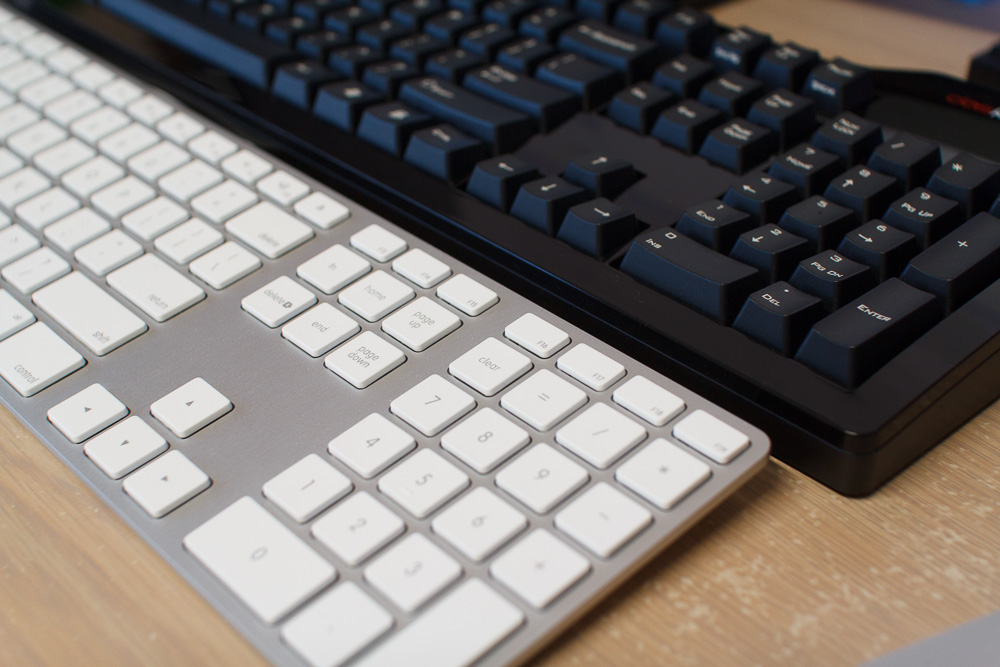 Comparison and Typing Experience
Different keys sound differently, too — the standard alphabet keys all produce the same sound, but that sound is different to the sharper clack of the number row, which is different again to solid clunking of the backspace key as you remove whatever typo you just made. Getting into a good typing rhythm is easy with a mechanical keyboard, because you have both the audial and tactile feedback that lets you know how you’re going.

After you get over the initial shock of how loud each keystroke is, you begin to realise how satisfying — visceral, even — typing has become, and all because you’re using a mechanical keyboard. Typing out this review was an absolute joy, as I heard every key being struck as the words appeared on the page, and the rhythmic tap-tap-tapping of the spacebar as you type is almost hypnotic in nature once you begin to get accustomed to it. It’s a strange thing.

My previous keyboard was the popular Apple aluminium keyboard. They’re good little keyboards; super thin, low profile keyboards with the laptop-style, chiclet keys that have practically no travel and offer very little in the way of feedback. I liked them a lot better than the old style clunky keyboards I was used to, because I didn’t have to move my fingers up and across the surface of the keyboard to get to other keys, I could kinda just scoot across. 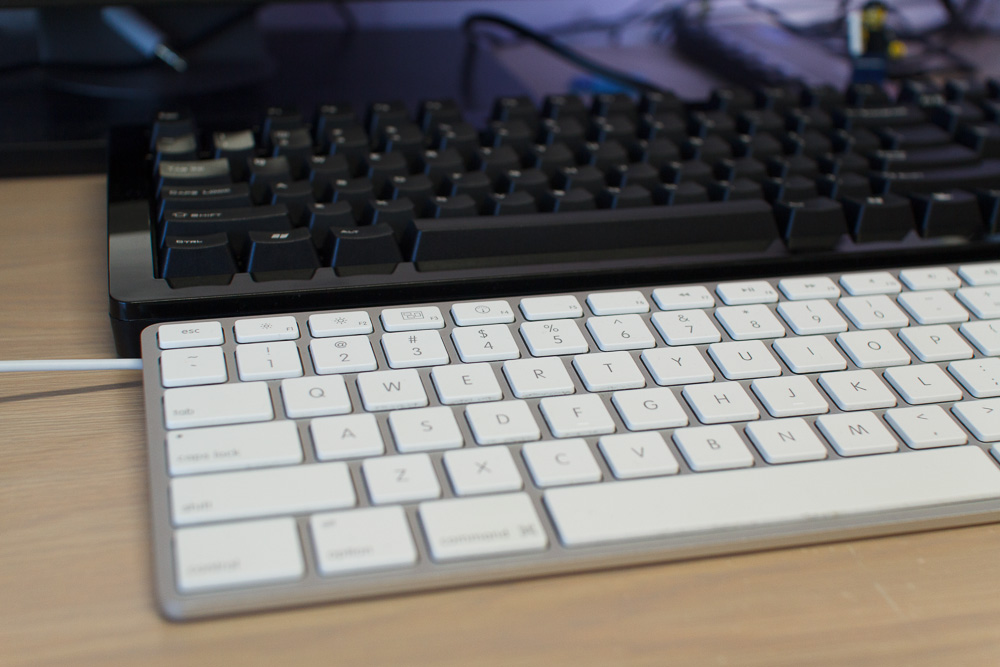 Mac Usage
Even though this keyboard is designed for PCs, I use this keyboard primarily with my Mac. Das Keyboard do make a Mac version of their keyboard, the Model S Professional for Mac — but it’s only available with Blue switches, which I wasn’t so keen on. The differences are slight: it has a few special media keys for previous track, play/pause, next track, as well as special keys for controlling brightness and volume, and, of course, the special command and option keys Mac owners will be used to.

The Model S Professional doesn’t have those keys. You can re-map the normal Control and Alt keys using the Keyboard pane in System Preferences, so you make Alt the Command key, the Windows key the Option key, whilst Control stays the same — but what about the special media keys, brightness keys, and so on?

Enter Keyboard Maestro1. With Keyboard Maestro, remapping any key on your keyboard is easy. It was trivial to remap the proper keys to the media keys, with perhaps the only shortcoming being that every time you activate any of the “normal” F-keys now, it will do whichever Keyboard Maestro action I assigned to that key, even if I’m not using the Das. Thankfully, this isn’t a huge issue as I can’t even remember the last time I actually used the function keys as function keys — they’re always used for controlling brightness/volume/tracks in iTunes.

So, there you have it: a few too many words on what it’s like to be one of those pretentious mechanical keyboard owners. It’s easily the best keyboard I’ve ever owned, and I would definitely recommend mechanical keyboards to anyone that’s looking for a better typing experience.

Strangely enough, mechanical keyboards are recommended to people who do a lot of Starcraft/RTS gaming, too — I’m not exactly sure why (perhaps something to do with the feedback you get when tapping lots of keys frequently), but after spending a few good months with my Das, I can safely say this: if you do a lot of typing and aren’t using a mechanical keyboard, you’re missing out.