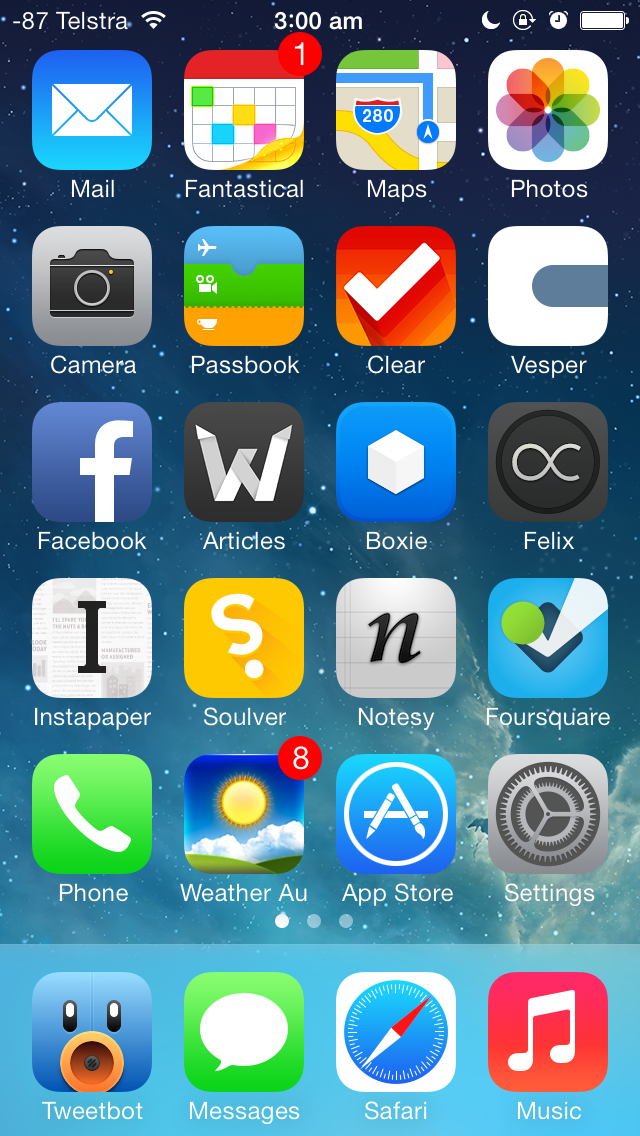 It’s been a year since the last time I wrote one of these, so I figured it was about time I updated the previous post with everything that’s changed during that time.

IOS 7 brought a massive list of changes, first and foremost of which was a massive overhaul of how everything looks and feels. Some people absolutely hate it, but I like it, for the most part — it makes everything fun.

Anyway, let’s talk about some apps.

Fantastical 2 is everything I’ve ever wanted in the iOS calendar app. I’m a huge fan of Fantastical on the Mac, and Fantastical on iOS is just as good. It has two different views, but I’m mostly in the one that gives me a month view with a list of upcoming events down the bottom. Tapping directly on a day jumps the list down below to the events happening on that day (or if that day has no events, the next events). I’m not a huge calendar user, but Fantastical is worth it when I am. And yeah, Fantastical 2, which now has reminders support with natural language creation, is every bit as good as the first.

Clear is pretty great. I still use Apple’s own Reminders app for repeating stuff-I-need-to-do, but the fast item creation and gesture-based interface of Clear are too fun to pass up. In my mind, Clear is good for if you need a quick list of to-do-items and need to get them down as fast as possible — while Reminders isn’t bad, Clear just works. And yeah, unlocking all the themes was one of the first things on my to-do list.

Vesper is an interesting one. I’ve got a few apps which let me do writing — Notes from Apple, Vesper from Q Branch, and Notesy from Giant Yak Software. They all let me put words down, but they all serve slightly different purposes. Notesy is great because it syncs with Dropbox, where I put all of my plain-text writings. But Vesper is also great because it lets me just write, without having to worry about sync conflicts, markdown formatting, or anything else. If I’m honest, I could probably drop Vesper and just stick to Notesy for my iOS writing needs, but it’s a nice app (and I feel some kind of loyalty to the developers), so I keep it around.

The iOS 7 redesign of Facebook isn’t bad, actually. I kept the debug icon version around until the iOS 7 version dropped.

I hate the new Articles icon, though. Love the app, loathe the icon1. The older version of the icon was much nicer, even though it made less sense — a better Articles icon would have been the global puzzle logo the Wikimedia foundation uses, but I’m guessing that’s copyrighted or something. I can’t help but feel that the developer of Articles doesn’t give a damn now that she’s working at Apple. It happens, but as for Articles, the reason it’s still on my home screen, ugly icon and all, is that there is no better app for browsing Wikipedia articles.

Boxie is the latest addition to my home screen. It’s a better Dropbox client for iOS with a few advanced features such as bookmarks (quick access to files in your Dropbox), Favourites (the usual offline files), and if you have the Pack Rat expansion in Dropbox, even lets you see versions and deleted files right from within the app. It also has a few nifty sharing features (you can share files between Boxie users without being kicked to the Dropbox website), as well as the ability to share files to non-Dropbox users in the usual Dropbox manner. It can notify you about changes to files whenever you launch the app too (which you can disable, thankfully). Plus, it’s been updated for iOS 7 — the official app still hasn’t been.

I still don’t use App.Net as much as I would like to, but Felix remains one of the best apps out there. If I remember correctly, Felix was one of the first apps out of the gate with a brand new design for iOS 7 — but it was extremely gesture-based before, and now it’s even more so. Not bad for a one-man show.

I don’t think I’ll ever switch from Instapaper to another read-later service, even after Marco Arment sold it to Betaworks, since it’s so well supported in apps. Plus, I have every faith in Betaworks doing the right thing by their customers: they always seem to be open to feedback about Instapaper or Digg, another service of theirs that I’ve been using lately. Instapaper remains an old favourite of mine, even if I’ve all but given up on reading stuff in there.

Soulver is a great calculator. Now updated for iOS 7, with a new icon, refreshed user interface, syntax highlighting, and unit conversions. The best calculator app just got even better.

Like Instapaper, I’ve been neglecting Notesy of late. I used to write a lot on my iPhone (mostly on the bus), but these days I just enjoy zoning out with whatever incredibly shameful music I’m currently into (today: new Avril Lavigne!). Probably why I haven’t published all that much here in recent times (the lack of writing on public transport, not new albums from pop artists).

Foursquare is great. Every time I use it to check in to some place, I’m reminded to making the user experience as smooth as possible for the most common task. Foursquare nails the user experience by providing the tap-and-hold method for checking in to a location, and the progress bar that replaces the status bar is just icing on the very tasty cake.

Pocket Weather Australia hasn’t officially been updated to iOS 7 yet either (it still uses the iOS 6-style on-off switches), but it had such a custom interface in the first place that it doesn’t really need to be. If you’re not poking around in the settings of the app, there’s no way you would be able to tell it wasn’t designed for iOS 7 from the ground up — it’s truly a design that has stood the test of time. Still one of my favourites, and the best option for Australians to get locally-sourced weather from the BOM. I weep every time someone else comes out with a new weather app for iOS, only because I know it’ll be pretty much useless to me — because regardless of how pretty it is, or what unique feature it offers, I know the data won’t be as good as Pocket Weather.

I’m still getting used to the new iOS 7-inspired Tweetbot 3. The sounds are weird. They’ve removed the ability to swipe towards the right to see a conversation view. There’s no dark mode (yet), Lists are now less functional than in the old version, double and triple-tap are gone, and the way it has a larger default text size than any of Apple’s apps that use Dynamic Text in iOS 7 is a little strange. But there’s plenty to love, too: the design is much “lighter” in that it’s less customised than their previous apps, while still having enough little touches and fine details to still feel like a Tapbots app. The swipe-to-dismiss images is nothing short of amazing (try swiping up, or left, or right to dismiss), and the sense of physicality within the app is stronger than ever. Have you see the way it unblurs header images in profile view? Or how it supports swipe-to-go-back everywhere? It’s one of the best apps on the platform, which earns it a spot on my dock.

In iOS 7.0.3, there’s an option to turn reduce motion. You lose the parallax effect the home screen had (where the icons and wallpaper would move according to how you tilted the device), but what you also lose are the zoom-y animations that happen whenever you open/close an app or a folder. What you get in return are nice cross-fades, which, even though they might not actually be any faster than the zoom in/out animations, definitely feel faster. App content appears more or less instantly, even though you might not be able to interact with any of the UI until the cross fade has finished animating. Plus, turning reduce motion on means you get pixel-perfect wallpapers, if that kind of thing matters to you.

I find super bright wallpapers distracting, so I’m still using one of the stock wallpapers — it’s the first one listed in the “Static” collections. If Apple ever opens up the ability for developers to create their own dynamic wallpapers, then that would be great, but until then, the space one that I’m using is OK. There’s some great stock wallpapers that come with the device, and speaking of which — I really enjoy a lot of the ringtones and notification sounds, too. Not that the old ones were bad or anything, but the new ones just suit iOS 7 that much better.