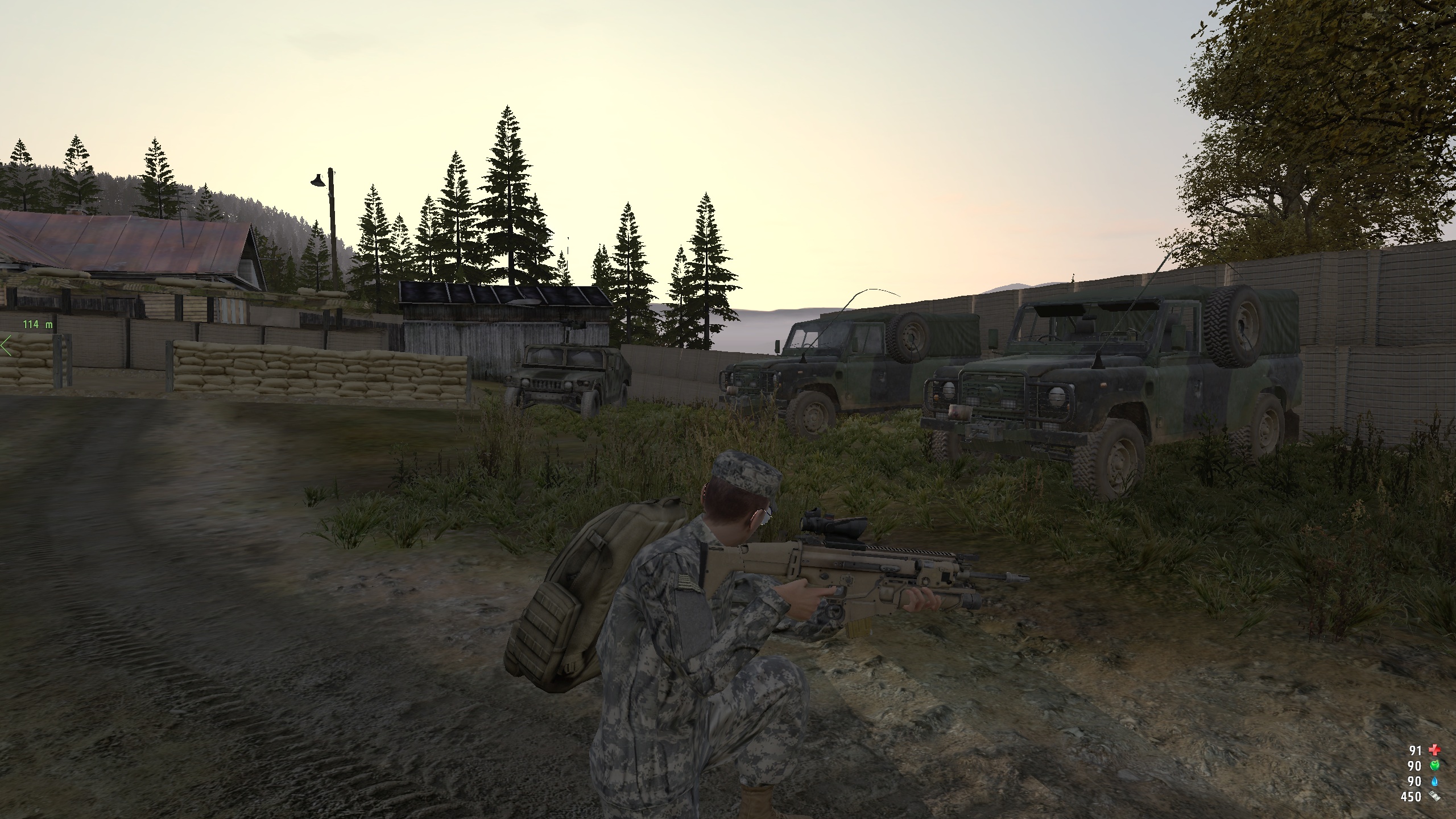 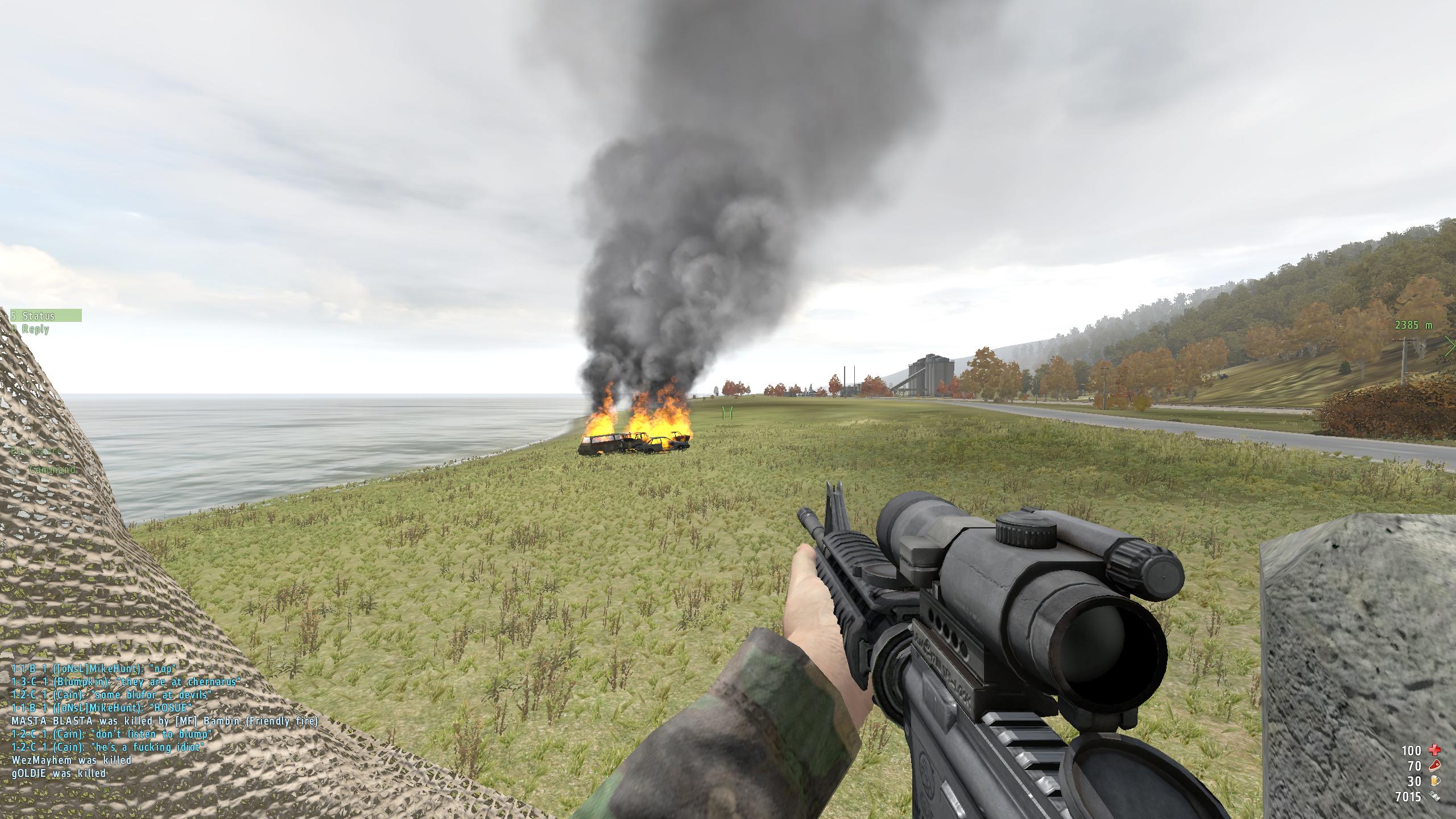 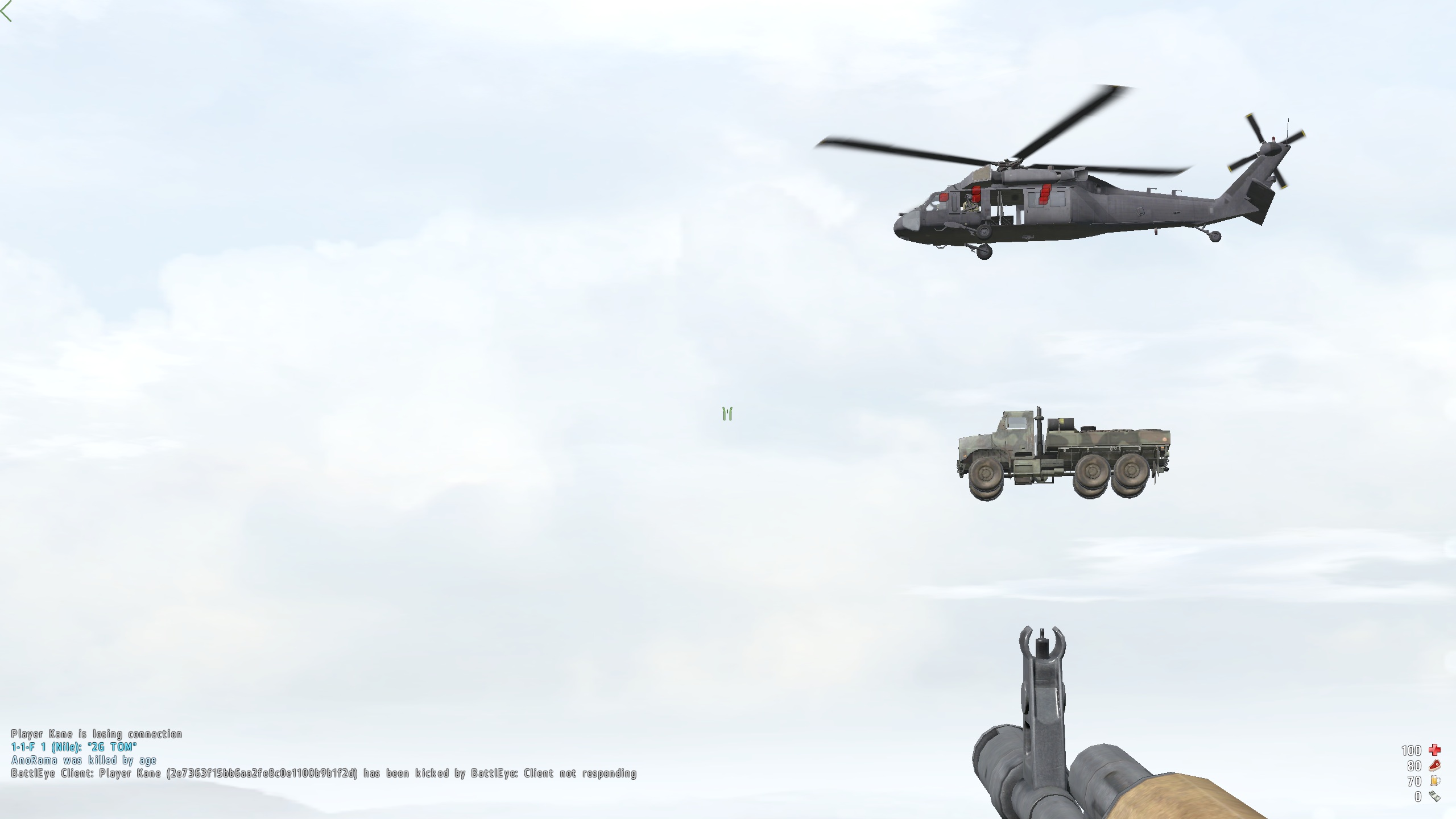 A Blackhawk towing a MTVR.

Every now and again, an server-wide objective appears for every player on the server. It’s usually something like a go-get mission, where you have to go get an abandoned repair truck that could help your team. Or sometime’s it’s a weapons cache that’s guarded by NPCs. Sometimes it’s an immobile heli or inoperative tank, which you can repair to get running for your team. They’re incredibly team-focused, and because the objectives appear for everyone on the server, getting to an objective first, holding it until the calvary arrives, and making away with the loot/tank/heli is usually a monumental task depending on how valuable the objective is (and how much the opposing factions also want the objective for themselves.

You don’t really know where the objective will appear on the map, which is why it’s so important to have a small, fast strike force to go in, secure the objective, then have a larger force come in and take it back to base. Even if all the objective is is a weapons cache, that could help the team considerably later on in the game. 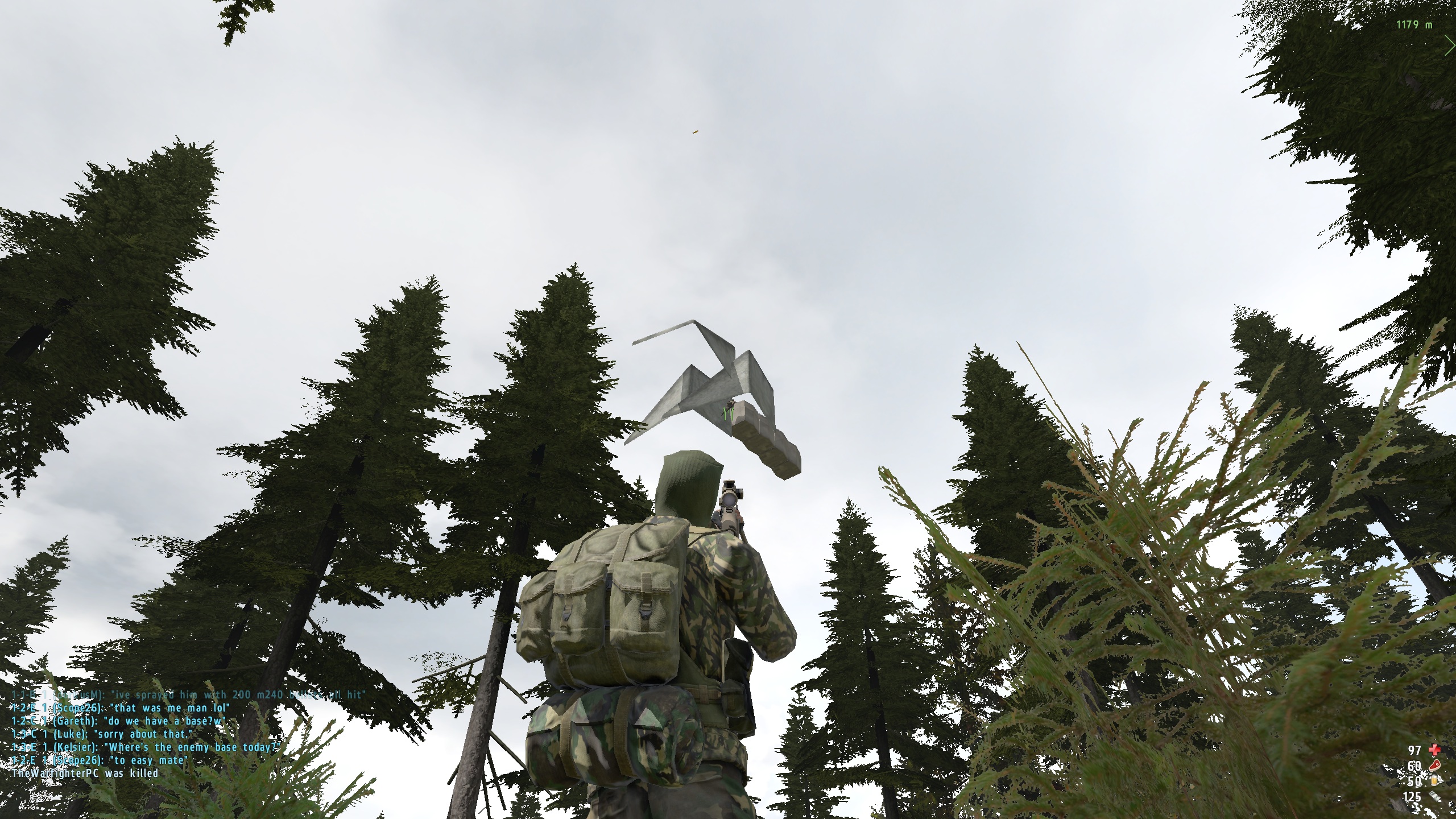 This guy managed to build himself a skybase far, far above a forest.

Every time you kill someone in Wasteland, they drop their currently-held cash. You then have to go over and pick up the cash from their dead body, and with that cash, you can buy supplies such as medic or repair kits (for yourself or vehicles, respectively), things to help your team (spawn beacons), or other goodies such as food, and camo nets. Of course, you can also buy weapons, ammo and other militarised equipment such as rangefinders, GPS, and NVGs.

The locations of gun stores and general stores are marked on the map for everyone to see, which is why they’re usually hotly contested territory on the map.  It’s also not uncommon for you to head into the town where a gun store is only to see the enemy already having a grand old time in your gun store – the question then becomes, do you try and assault the gun store? Or do you just leave them to it? Maybe you don’t even get to make that call, since you get blasted as soon as you drive down the main road. 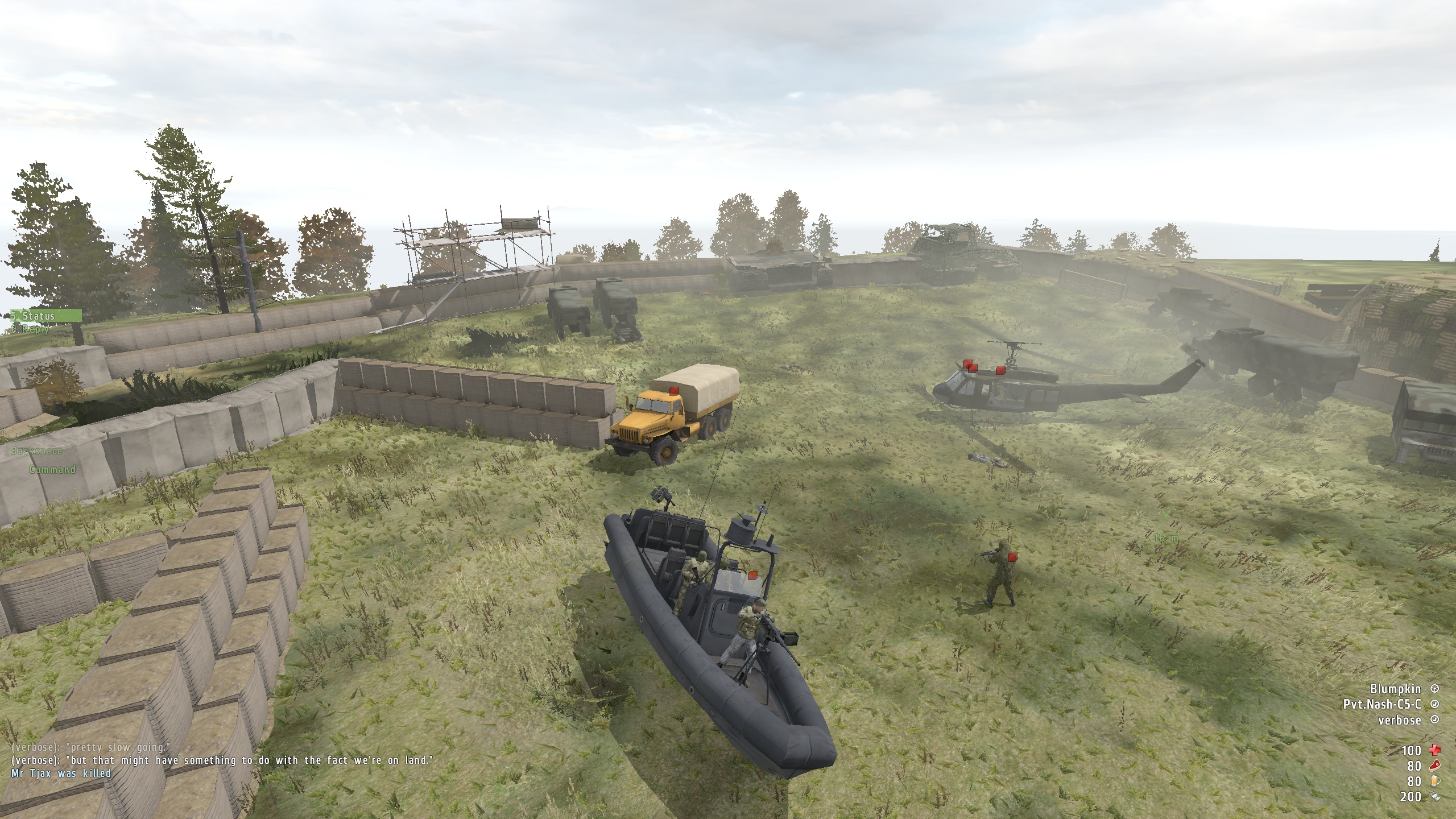 A boat on land is the most normal thing in the world.

I’ve saved one of the best parts of Wasteland for last: base-building, fortification, and construction. There’s a lot of structures you can place in Wasteland. For some reason, Wasteland players seem to love the concept of a “base” — where the main Opfor or Blurfor forces are located when they’re not out doing objectives. Such affairs are usually highly-team focused, as it takes quite a few structures to build a nicely fortified base of operations. You can play with scaffolding, sandbags, little fortifications, “depots”, various barricades, concrete slabs, ramps, tents, and heaps of other things. You can pick up and place objects pretty much anywhere (within reason), and there’s an almost infinite number of ways to fortify a base from enemy attack. There’s a number of buildings you can transport in cars, including mounted machine guns, food and water crates, and so on.

The fun starts when you’re starting to build your base — finding the right parts, loading them into your car, and transporting them to where you’re building your base. Then you have to work out the layout and how the parts will fit together while considering how to defend and attack from the base itself (perhaps, if you’re super unlucky, while you’re in the middle of constructing your base). And then all that’s left is to protect it from intruders — whether that involves you shooting people with your rifle, or jumping on a mounted turret and making swiss cheese out of their car is up to you. It’s incredibly good fun if you’re with a few other players on Teamspeak and arguing about where you should be placing the walls. 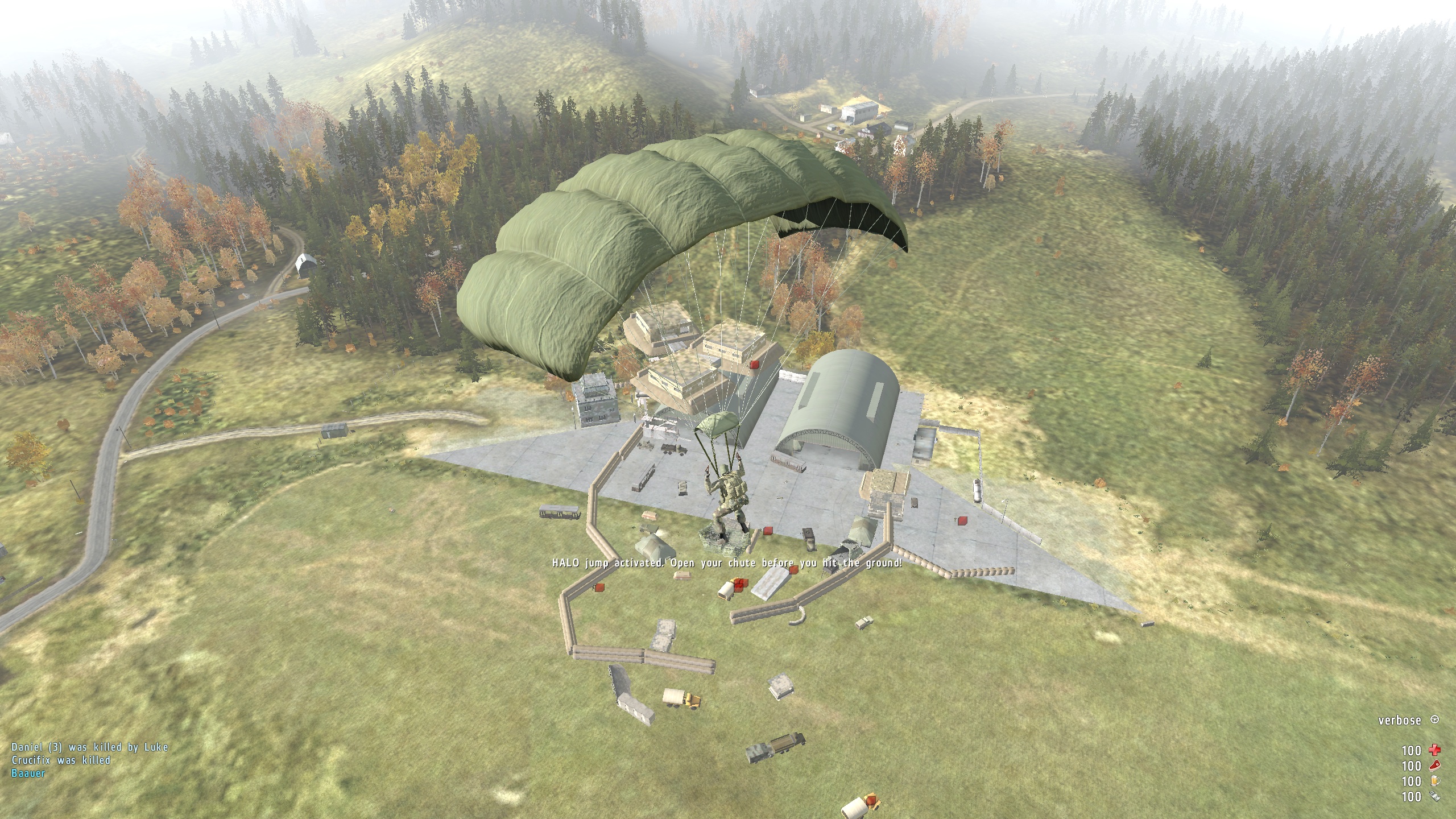 But, just between you and I, the one reason Wasteland is so amazingly great is that it’s everything I’ve always wanted in a shooter. As it’s built on a military simulator, it’s got the realism that I want: the bullet physics and weapon variety, the way you use the guns, the way the guns feel, sound, all of that — it’s all great. But it’s also got the teamwork, exploration, and adrenaline-pumping encounters of DayZ and other similar first-person shooters. It’s not as arcade-y, which is great, but it’s got way more than enough to keep me hooked, because in Wasteland, every encounter is different. Yes, I’ve died from truly-screwed vehicle physics before, and yes, I’ve died without getting a single shot off, but it’s all part of the experience! Wasteland lets me play soldier like I’m actually in the armed forces, all from the comfort of my own home.

The long and the short of it is: I’d miss a lot of Wasteland if I went back to DayZ. I not sure I could say the same if it was the other way around.