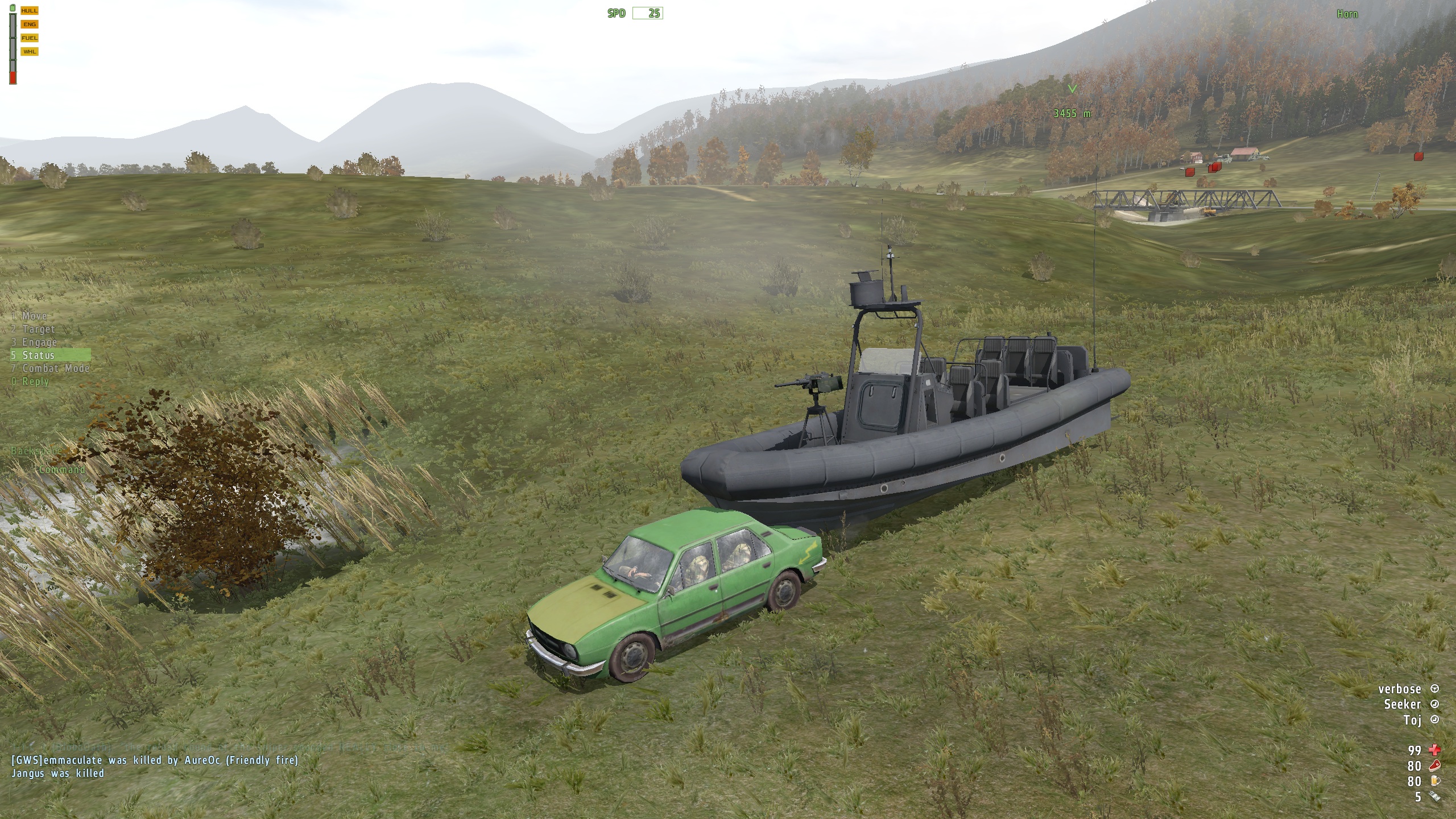 It’s the end of a long night. Toj, Sub, and I have been shot at, shot others, killed, and been killed all around the map. We’ve held the bridge at Prig even with cars driving past it, sent the drivers of armoured Hummers and medical Vodniks to meet their maker with rockets, and scared anyone in the vicinity with shots from an M107.

Sub had called it a night already, and Toj and I both agree that this will be our last life. We spawn in Cherno, looking for a car to get back to Elektro: we know Prig has been hot all night (we’ve done a lot of killing around there ourselves and had a little bit of an adventure up on the east coast before spwaning in back in Cherno), but since it’s the last life of the night (and after we died to some total suspiscious stuff at Elektro) we decide to get up to some shenanigans.

Now, normally there’s over 700 vehicles in a server. Apparently, none of the ones in Cherno are working. We come across a bus that has a broken wheel, a ute that has a broken wheel, a jeep with a broken wheel, and a blue van with — you guessed it — another broken wheel. But right next to the van I find a green sedan that seems to be in working condition. The engine is still mysteriously running, leaving me to question the fate of whomever drove this little green sedan before me. The glass is a little banged up, but she drives. This other dude, Seeker, also gets in the car with me, and I head south towards the Cherno docks. There, Toj is manning a Hummer with a 50 cal; Seeker and I pick him up, and we drive towards Prig.

As we’re approaching Prig Seeker tells us to stop at the gunstore. As a new spawn he’s only got $100 on him, but that’s apparently enough for a basic M4 rifle and 2 magazines of ammo. Sam and I buy the same gear. We jump back in the green sedan and decide to do something, anything.

It was back at Cherno when we were driving to pick up Toj that I figured out a new, fun game: how long can you drive on the train tracks? Green civilian sedans don’t go very fast on anything but the highest quality bitumen, and railway tracks are about the same speed, terrain-wise, as the open grassland. Except I had figured out that you can drive at full speed (110km/h) when your wheels are on top of the railway tracks themselves — it’s nearly impossible to stay on top of the tracks for any period of time, but that just adds to the challenge.

So at this stage, we’re heading east from the gun store at Prig towards Cap Golova, east towards Cherno. I start to play the “how long can I stay on top of the train tracks for” game, when we spot it: a beautiful speedboat, complete with multiple seats and a mounted .50 cal on the front. In an instant, the plan is hatched: we tow the boat to the open sea using the green sedan, and cruise the open seas in our new found boat. It’s an excellent plan — what could possibly go wrong?

Just before we get out to attach the boat to the car, we hear sniper shots, but we’re not sure if they’re aimed at us or someone else. We hastily get out and attach the boat to the sedan anyway, where the shots have stopped – if only for a moment. With the gargantuan boat now firmly attached to the sedan (and absoloutely dwarfing the sedan in size) we start our nice journey south, towards the coast. It’s probably only 100 meters away, and definitely no more than 200 meters.

We’ve made it about halfway to the coast when we hear a massive explosion from behind, the kind of explosion that only accompanies an RPG hitting a car. I’m still driving towards the sea but use freelook to look backwards towards the Prig brdige, only to see there’s a yellow Ural headed east towards Cherno. It’s perhaps 100 meters behind us, but I don’t really care at that stage — all I cared about was getting that boat to the sea, unhitching it from the sedan, and starting the wonderful journey to wherever the open seas would take us.

Another massive explosion sounds through my headphones just as I reach the shore. We’re really not sure what kind of crazy shit is going on back there, but we’re focused on the mission at this point. I back the boat into the water just like I’ve seen people do in real life (only off boat ramps and the like, not directly from a beach), and when the boat is far enough in the water, I get out to unhitch it from the sedan.

Suddenely, there’s now sniper shots pinging all around us again. We’re waist-high in the water with the boat separated from the sedan – all we have to do now is get into it and drive out of range of that sniper. For some reason, the prompt to get in the boat doesn’t appear for what seems like an eternity, all the while as sniper rounds from who-knows-where are pinging all around us — in the water, on the boat, at the sedan. It’s madness, and Toj, Seeker and I are madly scrambling to get in the boat. (Poor Seeker, he really had no idea what was going on at that point as only Toj and I had communicated our plans to each other via Teamspeak. Seeker, to his eternal credit, seemed to be content just going with the flow.)

At last, I managed to get in the boat. Sniper rounds still pinging all around us (miraculously, at this point none of us had died yet – the sniper was either a really bad shot or just trolling us) I begin gunning the engine, but realise that this boat, like all boats, is incredibly, incredibly slow going backwards. A split second later, I’m dead. But it’s okay, because Seeker has realised what we’re trying to do, gotten in the drivers seat, and also begun gunning the engine for all it’s worth. Sadly, a few seconds later, he’s dead too.

Toj is the single remaining survivor of our expedition, and he’s spotted the sniper way up north on the rocky cliff face just between Prig and Elektro. He doesn’t have a gun that can reach that kind of distance, but then it dawns on him: the .50 cal on the front of the boat easily will. He uses a lull in the sniper fire to climb into the gunner’s seat, takes aim at the sniper, and downs him in one shot. It’s an amazing kill, but not the sniper that managed to kill Seeker and myself – but even that’s okay, because a second later, the sniper that kills us is eventually killed himself, nailed by some unknown assailant.

A final sniper shot sails clear through Toj’s head, and that’s it.

The boat sits lifelessly, drifting aimlessly in the water. Its passengers long dead and its fate unknown, it has no real idea how much entertainment it provided in those last few moments.

Because it’s moments like these that make Wasteland so incredibly special. Moments like this where you realise that incredulity of your situation, and yet, can’t help but laugh at how insanely good fun it all was.

And isn’t that what gaming is all about?