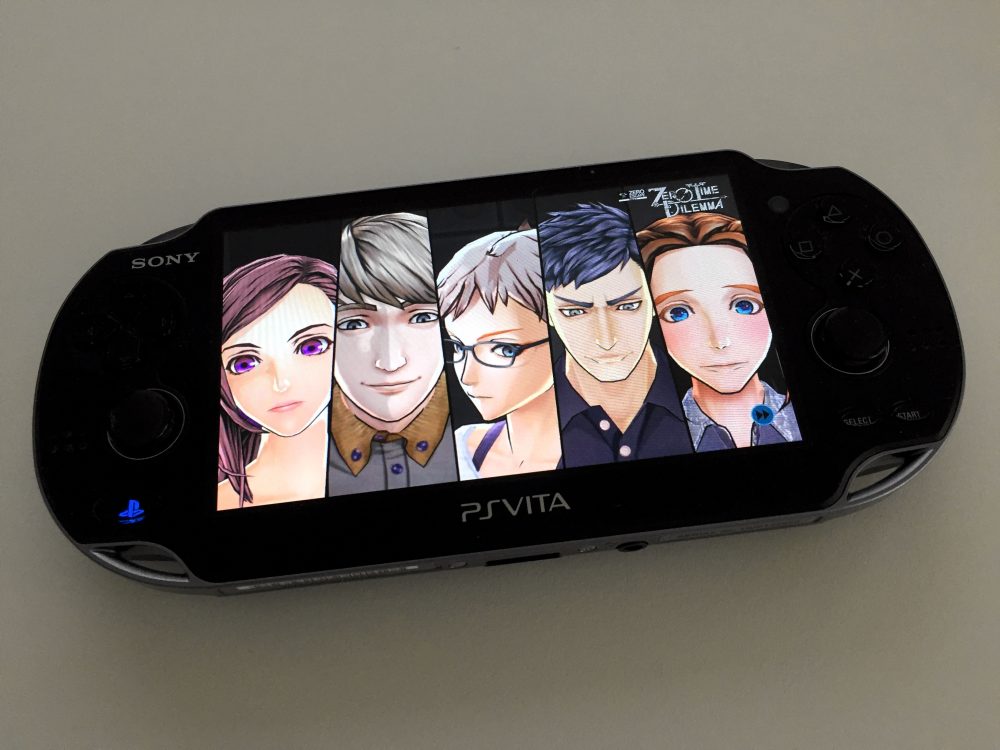 I picked up Zero Time Dilemma last week on the PS Vita, and it’s really reminded me why the PS Vita is my favourite console. While Nintendo’s 3DS lineup may edge out the Vita in terms of social integrations (StreetPass is a hell of a thing), the PS Vita remains the more “serious”, the more mature console. Not because it doesn’t have a cutesy interface like the 3DS, but because it lacks the simplifications of the 3DS that make it the more appealing to a younger audience.

Like a lot of 90’s kids, I grew up on Nintendo. My friends had the Nintendo 64, I eventually got a GameCube, and there were various portables interspersed throughout all that. The Game Boy Color introduced me to portable gaming, and by the time the Game Boy Advance SP rolled around, I was hooked. (I borrowed a friend’s Game Boy Advance for a few weeks, which was pretty cool, but I never had one of my own.) I picked up the original 3DS when it came out, but by that time I had more or less outgrown portable gaming, eschewing it in favour of these new-fangled “computers”.

Fast forward a few years. I haven’t played Pokémon for far too long, but I get the chance to acquire some 3DS hardware for cheap. I jump at the opportunity, with the intention of sating my desire to catch pocket monsters for another decade or so, publishing a series of posts about the fun I was going to have. Unfortunately, whether it was due to Poké-fatigue or something else, I never ended up finishing Pokémon Y.

Somehow, I ended up buying a PS Vita in the middle of that. I imported it from the US due to Sony being much more lenient with their region-locking than Nintendo was, and I spent a good chunk of time in Persona 4 Golden which I later wrote about.

By the same token, the growing library of titles on the 3DS meant that it was now a compelling purchase. I remember reading about Fire Emblem Awakening somewhere, and feeling it was a good a time as any to jump in, I imported a 3DS XL from the US along with a physical copy of Fire Emblem Awakening.

The 3DS XL was pretty great, despite Nintendo’s insistence on region-locking its titles. My imported 3DS meant I was never going to be able to walk into my local EB and pick up a 3DS game on a whim, but I was OK with that, thanks to increased digital availability of titles. I took my 3DS XL to PAX Aus the first and second times, and StreetPass really came into its own as the ultimate social drawcard, even if it meant walking around holding the right shoulder button and giving A a solid workout.

But for all of the 3DS’s many compelling titles and social integrations, there’s always been something off about Nintendo’s portable console. I can’t quite put my finger on it, but it feels as though the 3DS is still a console for kids — maybe because it is — but it means that there’s this feeling of something missing. As in, why isn’t there any easy way to take screenshots on the device to save moments in-game? In a world of super-high resolution displays, why are the screens on the 3DS still the same low-res that we were seeing five, ten years ago? And that’s not even talking about the seldom-used 3D feature — although it’s cool that Nintendo has come up with a way for glasses-free 3D to work in a portable console, the fact that 3D cuts the resolution in half should mean Nintendo would want to be cramming the highest quality display possible into the 3DS, at least for the upper display.

Which brings me to why the PS Vita is my favourite portable console. It doesn’t mess around with gimmicky 3D or have dual displays. It has an almost ideal blend of technology, featuring a single large display and dual touch-screens, and backwards-compatibility with PSP titles means it has the leg up on Nintendo, who at least seem to be doing something with Virtual Console on the 3DS and the Wii U.

You can take screenshots on the PS Vita, which almost single-handedly makes it a winner over the 3DS in my books. The screenshots even automatically organise themselves by game (even iOS 9 only manages to put screenshots into their own album, let alone by app). Transferring the screenshots to a PC is easy enough, even if you have to download an app, but the fact that Sony’s Content Manager Application can also backup game data is pretty cool. In short, the PS Vita just feels like a portable console for grown-ups, who have other devices and want the PS Vita to work with them, too. It’s quite a difference when compared to the marketed-and-aimed at kids 3DS.

When it comes to specs, the PS Vita beats the 3DS hands-down. It has a faster processor, better graphics card, and more onboard memory. You can even get a version of the Vita that has a 3G card, for when your portable console needs its own always-on internet connection. Dual analog sticks come standard on the Vita, and although there are two touch-sensitive areas, thankfully there aren’t too many games that use the rear touchpad (and the ones that do use it well).

By comparison, the New 3DS received its second analog stick with the New hardware refresh in 2014. While the New 3DS closes some of the technological gap between itself and the Vita, there’s still no getting around how the system puts its eggs into the basket aimed solely at younger players. Settings and options are scarce, and there’s still no good way of capturing content on the 3DS to share — doesn’t Ninty realise that sharing is a key component of being social?

That’s not to say the PS Vita is perfect. The OLED display may have fantastic colour reproduction and great black levels, but I can already see some form of burn-in/degradation of the LEDs on my model, although only in pitch-black scenes. There’s a port on my original Vita that remains completely unused, buying Sony’s memory cards for digital-downloads is basically extortion compared to micro-SD based memory, and if I had to nitpick, the blue light of the PlayStation logo on the front is perhaps a little too bright when I’m playing alone in my room with the lights turned off.

I’ll still play my New 3DS. There’s a Fire Emblem Awakening playthrough I have to perfect, and that’s not even talking about the new Fire Emblem Fates. But the PS Vita is my favourite portable console, and I don’t see that changing any time soon.