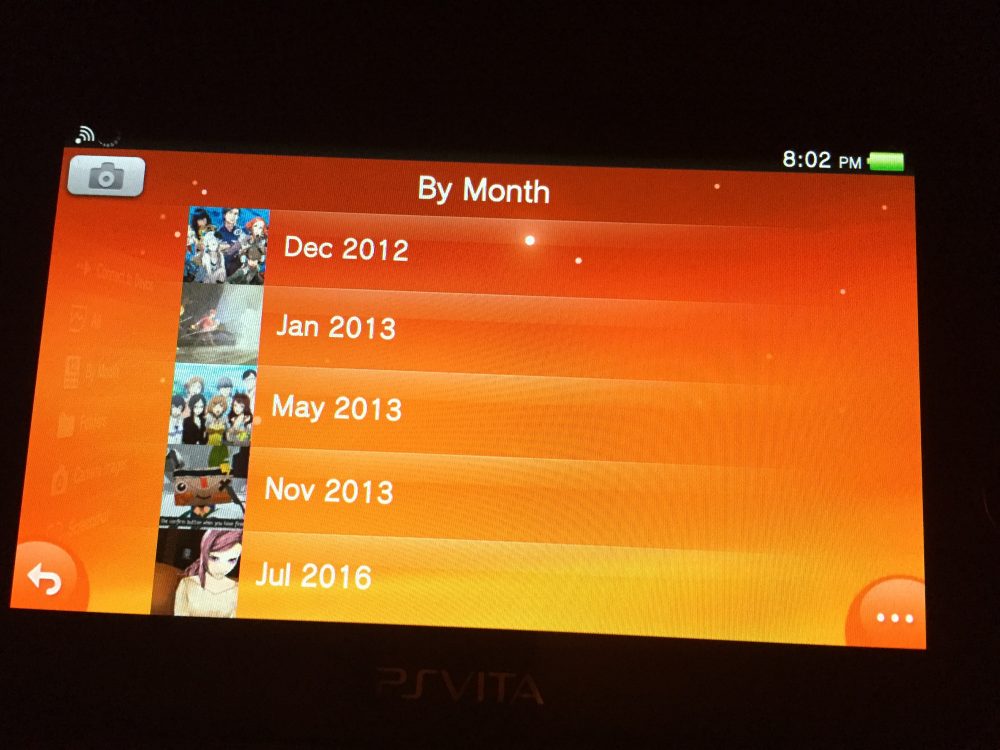 It’s been two and half years since I last played my Vita. Bonus points if you can name the games.

One of the best things about modern gaming is being able to choose what platform to play something on. Console exclusives have more or less died out apart from a few titles that I’m not really that interested in anyway, and I can probably count the number of games that I want to play that aren’t on a platform I own on one hand, so life is pretty good when it comes to choosing which platform I want to play something on.

Nine of out ten times, I’ll choose to play something on PC. I have a reasonably powerful gaming PC that’s purpose-built for the task, so putting all that graphics power to the task of pushing some pixels around is more productive than having it just sit around, looking pretty. Playing on PC means I get all the extra goodies that come with PC gaming: ShadowPlay to record in-game footage I want to watch later, and Steam integration for screenshots and for when I feel like being social and playing with friends (or to see what my friends are playing).

Note that I don’t have a current-gen console at the moment, either. I used to have an Xbox 360 and a PS3, but I left those behind in Hobart when I moved to Brisbane in 2015. Some times I miss those consoles — there’s still a few PS3 games I’d like to play through — but for the most part, I haven’t felt like I’m missing out on anything by not having a console. Besides, these days I’m playing way too much Dota to get stuck into anything else.

When Zero Time Dilemma came out at the start of July this year, I faced a dilemma: which platform should I be playing this on? I immediately purchased it on Steam due to the fact that it was the first title in the series that was available on PC. I didn’t have much of a choice with 999. Although you can play 999 on iOS these days, it lacks the puzzles of the 3DS version which I played through a few years ago. For Zero Time Escape, I went with the Vita version for something a little different.

I tried playing Zero Time Dilemma on the PC, I really did. But the advantages of the PC platform just weren’t there. It’s not a bad port, per se, but using a mouse and keyboard for what is generally a pretty hands-off game/visual novel interspersed with puzzle sections felt wrong somehow, like I was doing more work than just playing the game.

I could have gone with Zero Time Dilemma on the 3DS, too. I generally like the cutesy nature of the New 3DS, and Nintendo’s insistence on keeping games on their own platform forces my hand more often than I’d like. But here, the lack of an actual screenshot function would have let me down if I ever wanted to do a little write up — if I can’t go back and review the screenshots of the game I’ve played, did I ever really play it?

So it was settled. I asked my sister to ship me my PS Vita that I bought back in March 2012, and as soon as I arranged for some US PSN credit and downloaded Zero Time Dilemma, I knew I had made the right choice.