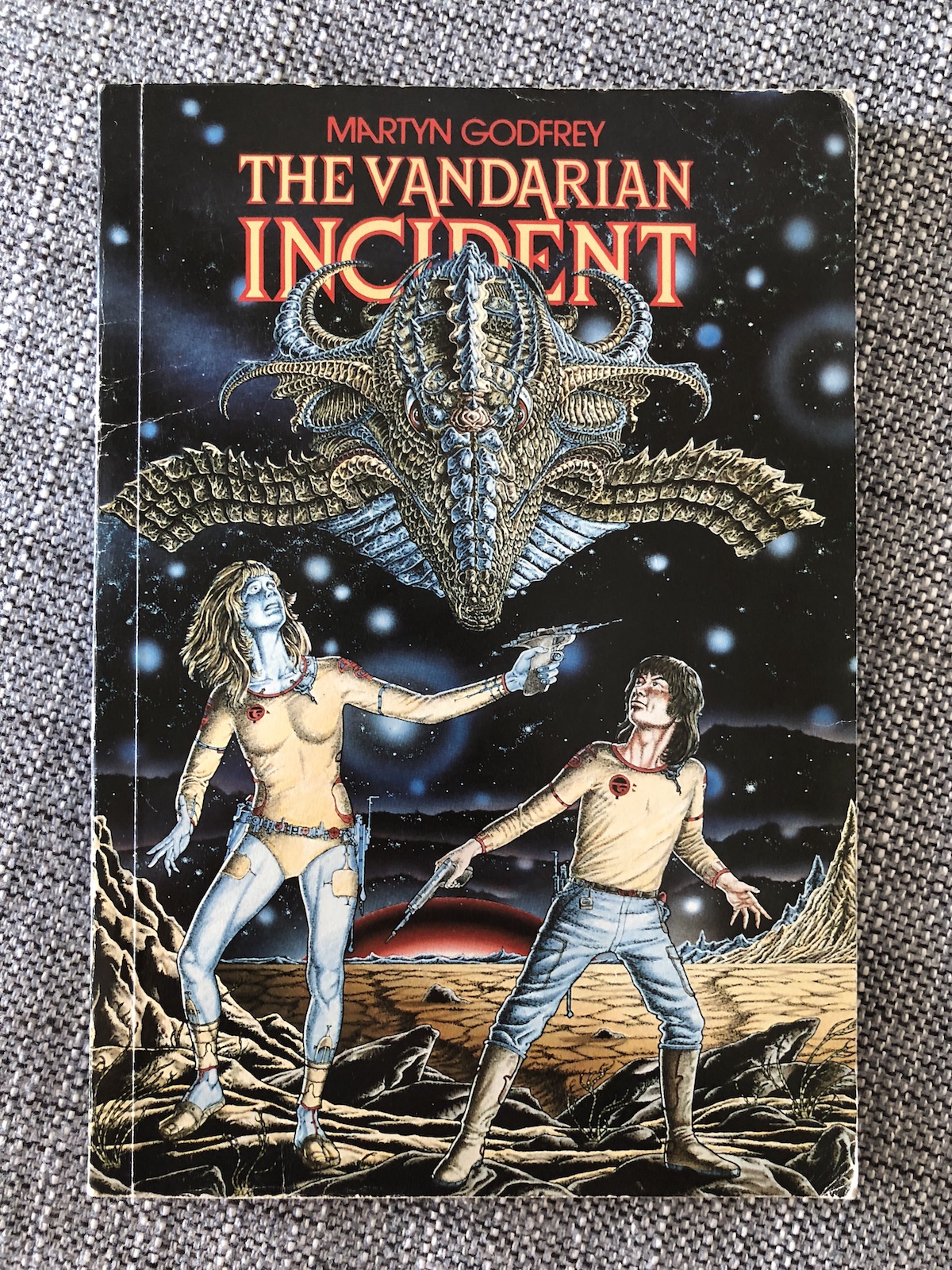 The Vandarian Incident, by Martin Godfrey

Since about 2010, I’ve been looking for the name of a book. Not all the time, obviously, but every now and again. Sometimes I’ll plug a few words into Google to see if, by chance, I’ll be able to stumble upon some crucial detail that will let me get one step closer to something more specific than “futuristic/sci-fi adventure book for young adults”. Other times, I’ll wander rows and rows of second-hand books, on the off-chance I’ll be able to recognise the front cover amongst a sea of other titles.

For years, despite being able to recall the majority of the plot, I was never able to remember anything specific enough that would let me get any closer to being able to Google the title, the author, or even the publisher. There were nights I’d dream about finding the book with some of my old things, or even dream about reading the book, but for whatever reason I was never able to read the title, and it remained elusively out of reach. I like to think I have a pretty good memory, so you might be able to understand my frustration at not being able to remember something as simple as the name of a book I read over a decade ago.

In June 2013, I posted on my blog about it. Not that I expected anything to come of it, but more as a marker, something I could refer back to, and refine as I remembered more details. I knew that it was possible someone would read it, know the exact book I was looking for, and get in touch to tell me about it, but I wasn’t exactly holding my breath for that to happen. It was more for me than anyone else.

At the time, one of my Twitter friends told me to post to Reddit’s Tip of my Tongue subreddit to try my luck, but I off-handedly dismissed the suggestion, offering the (admittedly very weak) excuse that I didn’t have a Reddit account.

Fast-forward a couple years, and I’m still no closer to finding out any details about the book that I read as a teenager. I do remember wading through dozens of pages of youth sci-fi/adventure books on Amazon in the vain hope that I’d recognise the cover, even if I had no idea what the title was, but that, along with everything else that I’ve tried, was as unsuccessful as any of my earlier attempts.

It’s August 2018. I sign up for a Reddit account, furnish my plot description with a few more details, give it a little extra polish, and post to the Tip of my Tongue subreddit, all in the vain hope that some kind stranger will either know the name of the book that I’m talking about, or know where to start looking.

Long story short, some kind stranger posts the exact title of the book I’m looking for, sourced from an old scholastic book ordering catalogue, based off nothing more than my description of it and some other contextual information particularly regarding the time period I read the book in (even though that turned out to be off by about 10 years). A quick Google confirms that yes, The Vandarian Incident is the exact book that I’ve been looking for, for years now. Total turnaround time, around 9 hours.

Thanks to the internet, I now possess my very own copy of The Vandarian Incident by Martin Godfrey, which you see in the photo at the top of this post. It arrived last week, all the way from a bookshop in Evesham in the UK, a town with a population one-tenth that of my home town, Hobart. I told my colleagues that it had sentimental value, which it kind of does — even if it’s not the traditional kind of sentimental.

There’s another story there, but it’s not The Vandarian Incident — which is, by the way, every bit as excellent as I remembered it being.

And now I can finally put this one to rest. Finish this particular chapter, if you will.