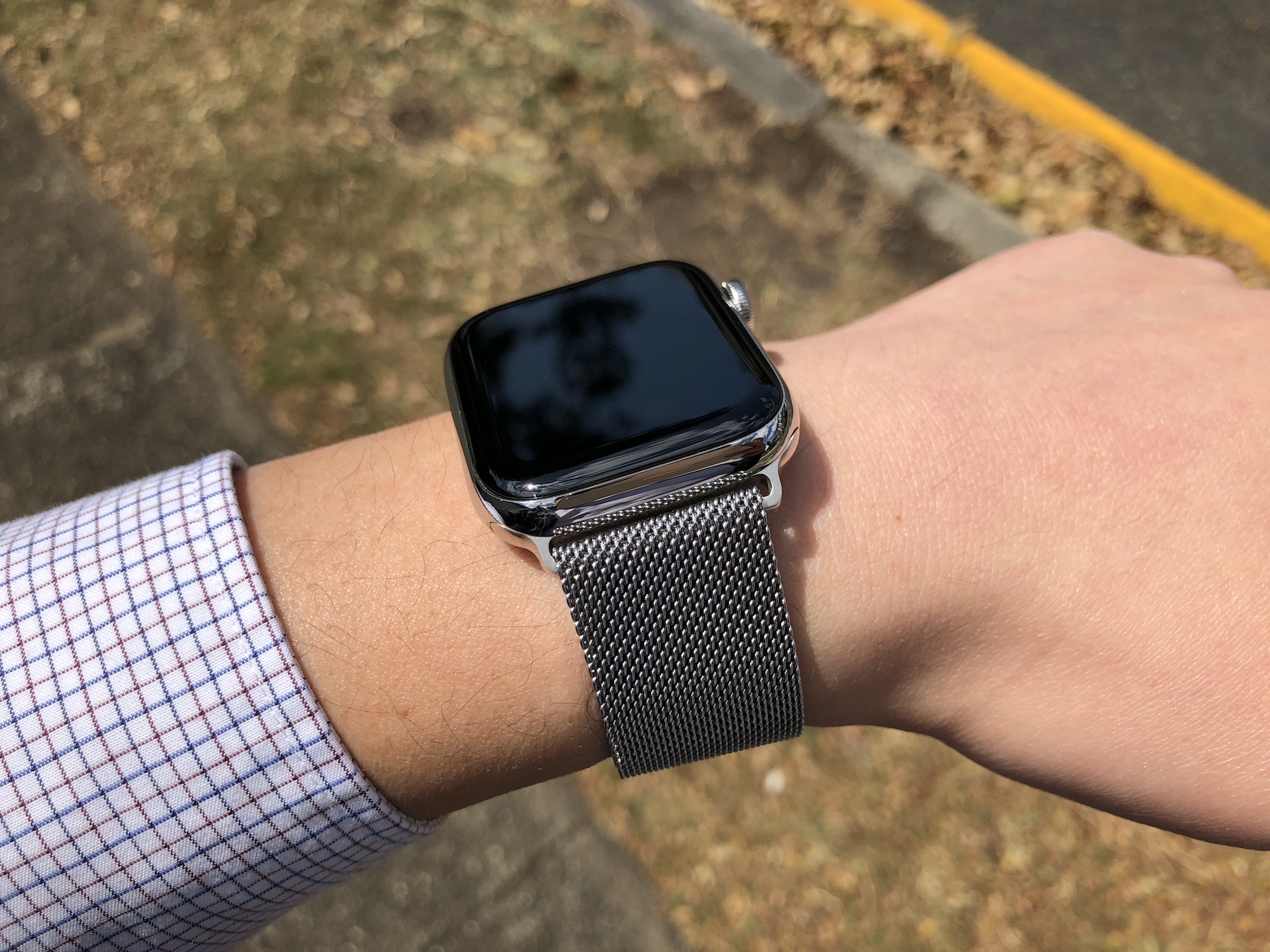 Stainless Steel Apple Watch Series 4 – but with a fake or real Milanese loop?

I have one of those decision-making problems again. After pre-ordering the Apple Watch Series 4 in Stainless Steel as soon as it became available, getting it on release day, and marvelling at just how much better it was in literally every way (besides, maybe, telling the time) than my old Series 0, I returned it before my 14 days was up. All because I’m not sure if I want the regular Stainless Steel, or the Space Black Stainless Steel.

As I said on Twitter, it’s not that I dislike the regular Stainless Steel. I’ve worn a Stainless Steel Series 0 since day one of the Apple Watch, so I’d like to think I know what it does well. It has plenty of advantages that the Space Black doesn’t, including a classic/timeless look, the fact that it probably combines better with more bands, wears better over time, and looks marginally better in various situations or when paired with different outfits.

I mean, most classic watches you see come in silver. Putting aside the issue of watch/lug mismatch for a moment, there’s probably a reason why the Apple Watch Hermés only comes in the Stainless Steel, and even though you’ll eventually get scratches on your Stainless Steel, they’re not something a casual observer of your watch is likely to notice. If they do bother you up close and in the right light, you can either polish them out, or write them off to “character”, a sign that your watch is worn and loved.

As much I loved everything about the Series 4 hardware, I wasn’t sure about the finish. To me, it was as if I had simply swapped my old Apple Watch for a newer model, one that looked basically identical to the one I had before. Don’t get me wrong, the Stainless Steel Series 4 looked extremely nice on my wrist, exactly like a premium watch should — especially when paired with something like the Milanese loop — but for whatever reason, I wasn’t enamoured with it like I feel like I should have been. Some of that can probably be attributed to it looking near-identical to the one I had before, meaning it didn’t have as much of that “new and shiny” effect associated with any new technology purchase, even through it was, literally and undoubtedly, new and shiny.

I didn’t hate the regular Stainless Steel, but the problem is, I didn’t really love it, either. 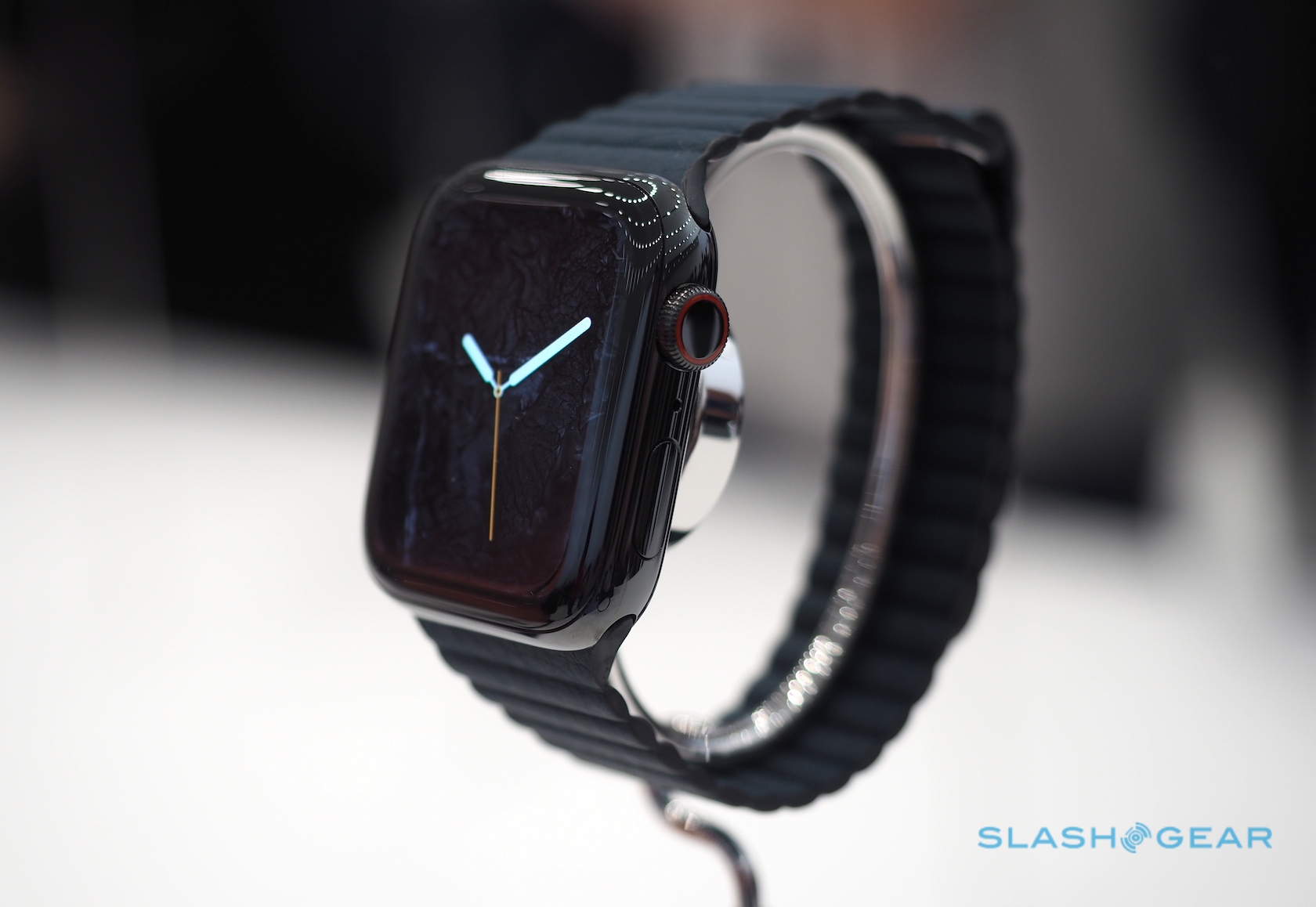 It looks incredible. There’s just something about the way the glossy, pitch-black finish makes the display blend seamlessly into the case, giving the Space Black a very sleek, refined look. And because it’s polished to be very shiny, it also catches light and reflections well enough. Differently than the regular Stainless Steel, but well enough to make it noticeable, as if a black monolith against your skin-coloured wrist wasn’t already noticeable enough.

Paired with the right bands, the Space Black can look very slick indeed. What you see above is SlashGear’s photo of the Space Black Series 4 from the hands-on event where right after the Series 4 was announced, paired with what looks like a black Leather Loop, and it looks amazing. The way the shiny display catches the light, as well as the case, with the band completing the very refined look, makes for an incredibly attractive package.

But as nice as the Space Black can look, it’s not without its own disadvantages.

First, band compatibility. There are plenty of people who say there are less band choices with the Space Black, usually for one of two reasons. Most of Apple’s own watch bands (and those that you can get from third parties) have Stainless Steel lugs (the part that connects from the band to the watch body) that don’t match the deep, piano-like glossy black of the Space Black. This is especially evident with most of Apple’s leather bands, with Leather Loops being the obvious exception. While you can get third-party bands that have matching black lugs, they’re not exactly common, and the last thing you want is to ruin the all-black look with a lug that stands out. And while I would personally consider darker bands a better match with the Space Black for mostly the same colour-matching reason, there are those that like the contrast between the dark watch body with lighter bands and/or mis-matched watch body and lugs — although if it’s contrast you want, I’ll point out that the regular Stainless Steel is able to offer that in spades.

Secondly, the Space Black has a very “technical” look to it, and the fact that it’s all black, all the time, means some might even call it intimidating, or even oppressing, although that might be a bit of a stretch. But its durability is second to none, with the Diamond Like Carbon-coating being near-impervious to regular scratches and scuffs that would definitely show up on the regular Stainless Steel.

It’s that same durability that means if you do somehow get a scratch or chip in the Space Black, you can’t repair it yourself. You can’t just polish the Space Black like you can the regular Stainless Steel, as the DLC doesn’t work that way, and you’ll need to get the entire watch body replaced if you want a pristine condition watch again. It’s not something I’m particularly concerned about, given that AppleCare+ is a thing, but something to bear in mind all the same.

And while the Space Black looks incredibly sleek, I’m not sure how it pairs with different outfits. I’m no fashion guru, but I feel as though there are plenty more traditional watches that are Stainless Steel than there are black/darker-coloured ones. As sleek as the Space Black looks on your wrist, some might say that it stands out too much1, both for casual jeans and a t-shirt, or a more formal shirt and pants scenario.

You can start to understand my indecision.

What about the Stainless Steel Gold, I hear you ask? Well, what about it? It’s nice — some say the nicest shade of gold Apple has come out with thus far — and while it would definitely satisfy my different criteria, it’s probably a little too different. Maybe if I was a few years older, but I’m not as attracted to the gold as I am the regular Stainless Steel or Space Black.

I’m almost convinced that some Series 4 redesign magic is at play here, either because the screen takes up that much more of the face of the watch than it did before, or because Apple has somehow made the watch body itself somehow less visible when you’re looking at the watch dead-on. Wearing the Series 4 on my wrist, it was sometimes hard to tell that it had a Stainless Steel finish (or perhaps I just didn’t notice because my eyes saw what they had seen for the past few years). But looking at my old, slow friend Series 0, the Stainless Steel sides of the watch body are pronounced and easily noticeable in a way that I don’t remember the Series 4 being3. It’s entirely possible that this effect is contributing to my confusion over what finish I want — if I’m less likely to notice the finish, does that mean it matters less? Maybe, maybe not.

Chances are I’ll be happy with either. But if that was the case, I might as well have kept the regular Stainless Steel. Now that I’ve returned it, I get a few more weeks to decide.

Or more, depending on how fast Apple re-stocks, and how indecisive I am4.