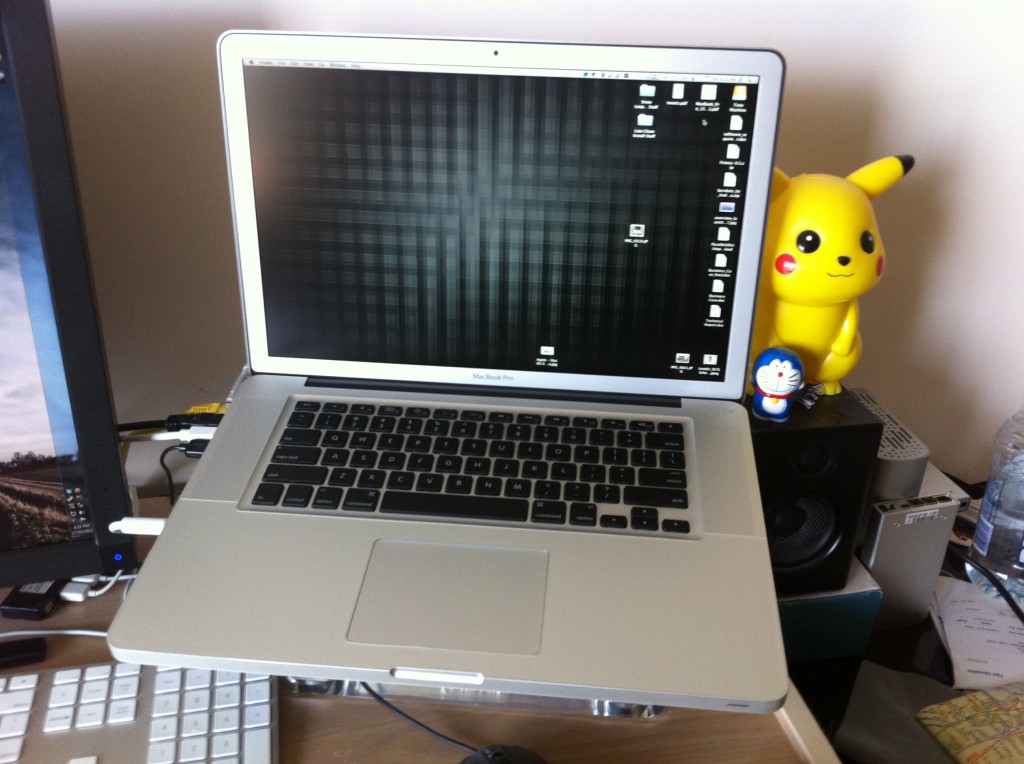 Officially, it’s a 2011 MacBook Pro. For the spec nerds, it comes with an Intel i7 2720M (2.2GHz, turbo up to 3.0GHz with all four cores), AMD 6750M w/ 1GB graphics RAM, oh, and Sandy Bridge too for some serious SATA III action. Things I’ve already customised about the machine include a higher-than-normal res (antiglare!) display (1680×1050 at 15.4 inches works out to be roughly 132ppi), a 750GB 7200rpm drive, and 8GB RAM. Officially, it’s also one of the first laptops to come out with Thunderbolt, Intel’s implementation of the next-gen data connectivity standard. I have a feeling that it will soon fall into the same relative obscurity along the likes of FireWire, but only time will tell.

Unofficially, it is, hands down, the best computer I have ever owned. The experience of going from a four year old MacBook to a brand new MacBook Pro is best likened to the experience of going from an iPhone 3G to an iPhone 4, and that’s probably truer than I actually think it is. It’s still the same great operating systems; all my friends like the Dock and iTunes, iChat, even the hallowed menu bar, they’re all there. Its everything that I know and love about Mac OS X, just insanely more responsive than what I’m used to, more fluid. It doesn’t matter that everything software-wise is still the same, because everything runs faster. Smoother.

Remember how I said going from an old MacBook to a MacBook Pro was like going from an iPhone 3G to an iPhone 4? With that particular upgrade you get the benefit of new hardware features, such as video recording, a magometer, and heaps more RAM. It’s basically the same thing going from a MacBook to a MacBook Pro; there are a whole heap of cool new hardware features that I didn’t have before, such as the multi-touch trackpad, backlit keyboard (worth it for this alone), FireWire 800, support for displays higher than 1920×1200 in res (which means it can finally power my 27″ without looking blurry), and of course, the graphics grunt to smash through games like L4D2 with ease (not that I’ve tried gaming on it just yet, still deciding whether I want to install Windows on it or not). I also get small things like an HD video camera and an SD card slot, but those are pretty minor in the grand scheme of things.

If information flows like water, then the new MacBook Pro is to the old MacBook like Niagara Falls is to the little stream of water that you make when you pee. Well, probably not exactly like that, but you get the picture — it’s fast. So fast.

I have this idea that I’ll eventually put a SATA III SSD in it, probably some 240GB version of the OCZ Vertex 3 when it hits sufficient market penetration so the price doesn’t hurt too much. I’ll rip out my optical drive, replace it with the hard drive that’s currently in it for an epic amount of storage, and then, then, the MacBook Pro will be damn near perfect. Scratch that, it will be perfect. Then Mac OS X Lion will come along, and then, well, I will be a happy man.

At least until the next big thing comes along, anyway.